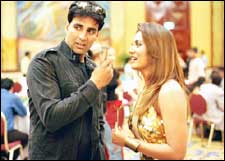 Deewane Hue Paagal doesn’t get as low and dirty as the Govinda movies, but here is a rip-roaring entertainer that makes no bones about the fact that it is here to make you laugh. And will do absolutely anything to achieve that. And boy - does it succeed!

Another one from the assembly line of Awara Paagal Deewana, and arguably, also the No Entry, Garam Masala lot, this one is the hands down winner in the category. Compared to DHP, the others can seem sketchy, unfunny, incomplete, while it becomes the redeemer of the whole class. If The Da Vinci Code did the trick for Dan Brown’s endless list of books about secret societies and the true identity of the Christ, DHP does it for the remaining also-rans.

The story begins with Karan (Shahid Kapoor in a revelation of a role), as the sweet, sensitive, secret admirer of Tanya (Rimi Sen), with whom he studies in the same college. The whole college is cuckoo about her, too, as she wins some hottest-person-of-the-award year or the other, sponsored by D’damas and Killer Jeans. The ads in this movie feel like a radio constantly going out of tune.

Well, Tanya happens to land in possession of a key to a certain groundbreaking invention that belongs to the same hall of fame as Mr. India’s invisibility watch and Koi Mil Gaya’s alien-communicator device.

Om Puri plays the goon who gets in pursuit behind her, forcing her to escape to Dubai and change her name to Natasha. His son, Sunny (Suresh Menon), has strong Tamilian leanings and is also madly in love with Tanya.

Enter Rocky (Akshay Kumar), whom Karan pays through his nose to track down Tanya in Dubai so he can reunite with his beloved. Shahid as a loverboy is a fit of utter perfection, while Rocky as the deceptively debonair conman, is a fitting encore to Garam Masala.

From here on, it is There’s Something About Mary digitally scrambled. One extra bit here, one missing there. The scene with Tanya’s dog, called Jayanti Lal in this movie, attacking Karan in his nether-regions, is a complete lift from the Cameron Diaz schtick.

Sunil Shetty is in the race, too, camouflaged as a lame man, while Paresh Rawal plays Tommy, pretending to be dimwitted. The list of actors is endless, but for once, it is purposeful. Just when you think it can’t get funnier, out pops another actor with a line that makes the crowds go wild, whistling and screaming.

The music by Anu Malik fits in brilliantly, especially Chak Le, picturised on Akshay Kumar. And Shahid Kapoor dancing is again a pleasure to watch. His merits are more feminine, the ability to sway without resistance. To be molded, than to mould. To be held, than to hold. He can dance with a grace and abandon that probably only shortly build men can. All in all, he is a treat throughout.

This movie is a no-miss if you enjoy comedy of the pratfall kind. If you don’t, here is a good place to begin. Going by the laughs per minute, it can be a good contender to add to your DVD collection. Check it out.
Share. Save. Connect.
Tweet
DEEWANE HUYE PAAGAL SNAPSHOT