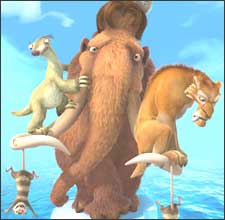 The entire gang's back: Manny (Ray Romano), the all-knowing woolly mammoth; Diego (Denis Leary), the snobby sabre-toothed tiger; Sid (John Leguizamo), the giant sloth who's a catastrophe-waiting-to-happen; and the ultimate show stealer, Skrat - the squirrel who's crazy about his nuts.

This time around, the movie's set towards the end of the ice age. The valley they live in is in danger of being flooded due to the meltdown, and instead of rescuing a human baby, they're on a mission to save themselves. The gang, along with an entire bunch of other pre-historic species (babies and grannies galore), has to relocate to the other extreme end of the valley, where supposedly there's an ark waiting to carry them all.

But Manny's got problems of his own. After everyone taunts him about how he's the last of his species, Manny's terrified that the mammoths are on the brink of extinction. But he gets an answer to his prayers in the form of Ellie (Queen Latifah), a female mammoth whom they run into during their "relocation". That is, until he can convince her that she is actually a mammoth and not a possum as she believes she is.

They are joined by Ellie's two "brothers", whom she has grown up with - Eddie (Josh Peck) and Crash (Seann William Scott), who are real possums and very real brats. Their attempts to protect Ellie from Manny (who has insensitively suggested that they repopulate the earth), are as imbecilic as, say, Sid becoming King of the Jungle.

And believe it or not, Sid does actually become the King of the Jungle. And even though his reign lasts for 4 whole minutes, it is not without some major mayhem, and a sing-song or two.

The real action happens in the last 7 minutes of the film, because, well, isn't there a rule somewhere that all movies have to have a climax? And the saviour ends up being, no, not one of our "gang members", but Skrat, albeit accidentally.

While the entire journey to the other end of the valley is slow, the very plot of the movie isn't very noteworthy either. It schleps along with the lumbering Manny himself, and the annoying possum brothers come across as weasels with ADD. And while the black humor and innuendo might keep adults laughing sporadically, it takes everything you've got to not nod off halfway into the movie. And kids never really needed a plot anyway.

The movie's saving grace, Skrat, thankfully gets more screen time in this one. His woeful adventures of getting that ever-elusive acorn are interjected with him going Kung-Fu on a group of piranhas in defense of his nut, and also an encounter at Pearly Gates. Creating a memorable comic relief character is no picnic, and the challenge lies in accomplishing this even when the character has no lines. In this regard, Ice Age and its sequel have exceeded expectations.

With the summer vacations around the corner, the movie's release could not have been timed more perfectly. Kids - the movie's primary target - will enjoy this one; it has plenty of furry animals, cute weird faces, and songs to keep them entertained for the entire 90 minutes. Adults, however, will probably leave with a bitter taste in their mouth. And we're not blaming the popcorn.
Share. Save. Connect.
Tweet
ICE AGE 2: THE... SNAPSHOT
ICE AGE 2: THE MELTDOWN SNAPSHOT

ADVERTISEMENT
This page was tagged for
Ice Age 2: The Meltdown english movie
Ice Age 2: The Meltdown reviews
release date
Ray Romano, John Leguizamo
theatres list
Follow @fullhyderabad
Follow fullhyd.com on
About Hyderabad
The Hyderabad Community
Improve fullhyd.com
More
Our Other Local Guides
Our other sites
© Copyright 1999-2009 LRR Technologies (Hyderabad), Pvt Ltd. All rights reserved. fullhyd, fullhyderabad, Welcome To The Neighbourhood are trademarks of LRR Technologies (Hyderabad) Pvt Ltd. The textual, graphic, audio and audiovisual material in this site is protected by copyright law. You may not copy, distribute, or use this material except as necessary for your personal, non-commercial use. Any trademarks are the properties of their respective owners. More on Hyderabad, India. Jobs in Hyderabad.