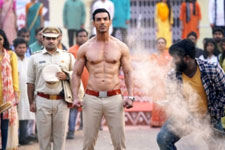 Punarvasu Pendse / fullhyd.com
EDITOR RATING
1.0
Performances
Script
Music/Soundtrack
Visuals
1.0
1.0
1.0
1.0
Suggestions
Can watch again
No
Good for kids
No
Good for dates
No
Wait to rent it
No
People on social media have an ingenious way of summarising long walls of text with the concept of "TL;DR", which explains the whole post for people that found it "Too Long; (and) Didn't Read" (it). In the sake of public interest, we will do the TL;DR for this one right in the beginning: run away from Satyameva Jayate 2. Even if you get free tickets. Actually, if you get free tickets, please be wary of the gifter's intentions.

Vigilante "justice" is the name of the game here, with scant regard for human life or property. Religious symbolism and rampant nationalism gets added in for good measure, with confused propaganda from all sides - half-baked secular values and in-your-face 56-inch chests co-exist inharmoniously. The hero (or heroes, since John Abraham has a triple role) goes about with his extra-judicial killings as both a lawmaker and a law-upholder, and is the judge, jury and executioner in the trope-iest way possible.

Oh, and speaking of tropes, every villain is honestly a caricature of himself. From corrupt politicians and corrupt cops to rapists, from dishonest businessmen to child-begging-ring overlords, we have them all here. Everyone gets swiftly dispatched by the Azads (John Abraham), who deliver multiple monologues on what "true azaadi" is during said dispatching.

There is no plot. Instead, we have a repeating sequence of events - drama, action and cringy dialogue interspersed with an attempt at "comedy" in between. Oh, and there are some random song and dance sequences which get thrown in for good measure. And a gratuitous scene of John Abraham sans shirt flexing his muscles because, why not?

The visuals are all over the place, the background score is equally atrocious, and even the action sequences lose their bite due to just how predictable and repetitive they get. As for the performances, John Abraham is the kind of actor that let their fists do the talking, and Satyameva Jayate manages to ruin even that. Divya Khosla Kumar seems like she is reading every single line from a teleprompter, which makes John's performance seem nuanced (spoiler: it is not). The rest of the cast overact, not helped by the mediocre dialogue writing which has rhyming lines for literally everyone.

There's quite literally nothing good here, and believe us when we say we tried hard to find something. It took barely 20 minutes for the movie to turn into an endurance race, and it's one of the races that we're simultaneously proud and ashamed of finishing. 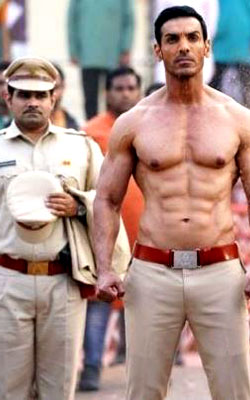 ADVERTISEMENT
This page was tagged for
Satyameva Jayate 2 hindi movie
Satyameva Jayate 2 reviews
release date
John Abraham, Divya Khosla Kumar
theatres list
Follow @fullhyderabad
Follow fullhyd.com on
About Hyderabad
The Hyderabad Community
Improve fullhyd.com
More
Our Other Local Guides
Our other sites
© Copyright 1999-2009 LRR Technologies (Hyderabad), Pvt Ltd. All rights reserved. fullhyd, fullhyderabad, Welcome To The Neighbourhood are trademarks of LRR Technologies (Hyderabad) Pvt Ltd. The textual, graphic, audio and audiovisual material in this site is protected by copyright law. You may not copy, distribute, or use this material except as necessary for your personal, non-commercial use. Any trademarks are the properties of their respective owners. More on Hyderabad, India. Jobs in Hyderabad.