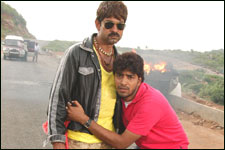 EDITOR RATING
5.0
Performances
Script
Music/Soundtrack
Visuals
NA
NA
NA
NA
Suggestions
Can watch again
NA
Good for kids
NA
Good for dates
NA
Wait to rent it
NA
Gopi is a story followed avidly by Lord Vishnu (and Goddess Lakshmi), who intervenes every once in a while with His observations. If it's true that the whole universe resides in Vishnu, then the makers of this one already have the largest possible audience, without needing to rely on the material world. Good for them, since in this illusory world of ours that look tough.

Gopi is a comedy without enough comic moments or actors. Most of Naresh's films are buttressed by a strong support cast, including almost all the elements in Tollywood's comedy spectrum, but this one has almost solely Naresh himself. While he's good, it is the number of faces in the posters that attract people to a Naresh film, not just his - Ali, Brahmanandam and Venu Madhav have merely truncated roles here, each lasting about 5 minutes in all. And there's no Krishna Bhagawan, no Kota, no Sunil, no M S Narayana, no L B Sriram, no Raghubabu, no Duvvasi, no Konda Valasa…

And Jagapati as a surprise attraction does not have a role written to impress. It's like taking a mountain lion and putting it in a zoo. And then teaching it to make faces.

What this becomes, then, is biryani rice without any side-dishes or raita. There's only so much of that that you can eat, however hungry you are. So Gopi (Naresh) is a bachelor who rejects marriage proposals for a living. After about 250 women fail to live up to his standards (the highest rating he's ever given a woman is 33.5/100 - to Aishwarya Rai), he sees Santhi (Gowri Munjal) at his friend Ali's pelli choopulu, and falls in love with her.

Her plots to get Ali to reject her, and asks for her hand in marriage himself. Just as the marriage is about to happen, he goes to Bangalore for a job interview, and on the way back, runs into the Priya (Aarti Chhabria), who asks him for a lift. His heart does a fox-trot, and he proposes to her and calls up home to tell his parents to cancel the marriage, about to happen in a few hours.

However Priya turns out to be a terrorist who is planning to use him as a suicide bomber. Balvinder Chaddha (Jagapati Babu), a CID officer who thinks he's funny, is investigating the case, and rescues him from her. When Gopi gets home, however, it's too late - Santhi is getting married to someone else, and his entire family is ignoring him.

Jagapati, in an almost guest appearance, would have looked cool with better handling - he has the right expressions but the wrong lines. Or maybe it is the other way round - how would you say for sure about that?

Naresh brings in the energy required for what he does. Suresh makes Lord Vishnu look drunk or sleepy - whatever those puffed-up eyes stand for - and pretty naïve. There is no reason to listen to the songs unless you were involved in composing them. The only reason you'd watch this one would be primarily that there aren't too many better Telugu films around.
Share. Save. Connect.
Tweet
GOPI SNAPSHOT

ADVERTISEMENT
This page was tagged for
Gopi telugu movie
Gopi reviews
release date
Allari Naresh, Gowri Munjal
theatres list
Follow @fullhyderabad
Follow fullhyd.com on
About Hyderabad
The Hyderabad Community
Improve fullhyd.com
More
Our Other Local Guides
Our other sites
© Copyright 1999-2009 LRR Technologies (Hyderabad), Pvt Ltd. All rights reserved. fullhyd, fullhyderabad, Welcome To The Neighbourhood are trademarks of LRR Technologies (Hyderabad) Pvt Ltd. The textual, graphic, audio and audiovisual material in this site is protected by copyright law. You may not copy, distribute, or use this material except as necessary for your personal, non-commercial use. Any trademarks are the properties of their respective owners. More on Hyderabad, India. Jobs in Hyderabad.