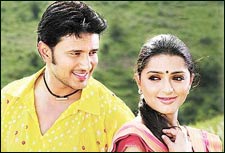 EDITOR RATING
5.0
Performances
Script
Music/Soundtrack
Visuals
NA
NA
NA
NA
Suggestions
Can watch again
NA
Good for kids
NA
Good for dates
NA
Wait to rent it
NA
A movie has to be seen in the context of its temporal, spatial and socio-cultural milieu. In other words, is there any other decent Telugu movie in a freakin' 100km radius at that time. Maya Bazaar kind of passes that test, depending on your definition of "kind of", "passes" and "that".

Maya Bazaar is a guide on what you should expect if Kubera himself comes and gives you untold wealth. That way, it's not a must-watch. The film is the story of Srinivas (Raja), whose farmer father gives his entire family poison when Srinivas is still a kid, since he is unable to provide them enough to eat. Unfortunately even the poison is not enough, and so Srinivas survives.

Srinivas grows up to be a righteous and kind-hearted man, who'll give away anything he has to help someone hungry. This kind of attitude is okay to have for 1 or 2 hours when you're asleep, not for a lifetime. Failing to realize that, Srinivas, a driver, adopts a kid Siri (Harshita) who's abandoned at an airport.

It turns out that this kid has holes in her heart, and needs surgery at a cost of Rs. 3 lakhs. Which is why it is not a good idea to adopt anyone with a heart. Anyway, Srinivas tries hard to generate the funds, but all the people he meets have already earmarked their spare funds for other charitable causes, mostly involving themselves.

He comes to Tirupati upon the kid's request, but sends her in with pal Bhaskar (Ali), since he doesn't like God. He then bitches wildly against God sitting outside, when suddenly Kubera (S P Balasubramaniam) appears in front of him and tells him that he is pleased with his devotion and wants to give him Rs. 5 lakhs. Yes, you should bookmark the place where Srinivas bitched from, and, preferably, the precise words he used.

Why does Kubera appear? Firstly, it's hard for any god to be taken seriously these days if he doesn't appear in front of someone. Not everyone takes note if you just choose to be heard as a voice - almost everyone hears voices in their heads these stressful days, and some people even hear explosions, which means your voice will perhaps get drowned. And choosing to appear in a dream is a risky option - what do you do about people who don't dream, or worse, people who don't even sleep?

Secondly, Kubera has his own set of problems. He's been cursed by sage Gautama for behaving recklessly with him when drunk. This is why several people say that you should not drink too much. Those people are wrong - they are just addressing the symptom of a much bigger problem. To eliminate the problem at the root, you should always stay away from sages.

Anyway, Gautama tells Kubera that he will have to collect the wages of sin from humans (a concept explained in easier terms in the film but unnecessarily complicated for you by our writers) until he helps a flawless human being and serves him all of that human's life.

Srinivas keeps bumping into Anupama (Bhumika), who helps him out in his loser days and who now applies to be his secretary. Just as they fall in love, Kubera decides that the best way out of his curse is to get Srinivas to die.

The film is reasonably entertaining due to the humor here and there, but no characters are well-developed (there we go again). Raja does what his director tells him, while Bhumika lends some grace to a very half-assedly written character.

SPB reminds you of S V Ranga Rao because of his looks, and that is unfortunate since neither can he lend that power to the character, nor does he have the dialogues. Also, why are these gods and asuras so thrilled when they see their own special effects? Kubera is laughing away at his own tricks in making vessels clean themselves.

The screenplay is not very convincing, even forgetting the fantasy theme. And the music sounds like all music by Radhakrishna. The film can, however, change a few impressionable young minds into being good, and gives a glimmer of hope to all those foot-soldiers of God who spend all their lives being honest and caring and forgiving, waiting for a reward one day, perhaps a power, that God will give them as the Chosen Ones, to change the world. Happy living.
Share. Save. Connect.
Tweet
MAYA BAZAR SNAPSHOT

See Maya Bazar full details
MAYA BAZAR USER REVIEWS
1 - 7 OF 7 COMMENTS
POSITIVE  |  NEGATIVE |  NEWEST  |  OLDEST  |  MOST HELPFUL  |  LEAST HELPFUL
USER RATING
6.3
38 USERS
Performances
Script
Music/Soundtrack
Visuals
NA
NA
NA
NA
Can watch again - NA
Good for kids - NA
Good for dates - NA
Wait to rent it - NA
Raja on 16th Jan 2007, 3:21pm | Permalink
Boring ....worst of the year so far. I never seen bhoomika in such a bad role. I don't even expect her in such kind of small role. If u see it u will waste u r money and time.
RATING
2
Venkat Kishore Ryakala on 9th Dec 2006, 12:06pm | Permalink
Brilliant..not since scarface ..(was seen by some dude in India )..has hinduism received such a shot in the arm..the religious connotations are hard to miss and the divine intervention..subtle in suggestion and execution lays the uindertones of grace in this film..that the whole film is a metaphor for a pencil stuck in my ear goes without saying ( or is it the other way around)...either way, watch this one folks, ...if for no other reason than the sheer joy the comes from abandoning all reason..
RATING
8
Santosh Kumar on 8th Dec 2006, 4:10pm | Permalink
bad review i say. this movie is clean entertainer almost zero mass elements.
RATING
8
Venkamma on 8th Dec 2006, 12:26pm | Permalink
i personally had a good time reading this!mr.vikram, what is it that you expect to see in a review that this doesn't have? if you don't like the jokes, just say that..why go off on hyperbole about everythuing else."very very very bad"??
RATING
4
Vikram Phadtre on 8th Dec 2006, 8:13am | Permalink
very very very bad review.....more than reviewing the movie, the reviewer tries to entertain the readers with his outmoded jokes.
dude, first concentrate on wht a review reader looks in for a review, and then later start ur own website and try ur comic skills over there. simple and sincere advice
RATING
6
Anand Raj on 7th Dec 2006, 10:33am | Permalink
I need answers to the following questions.

1. Have you guys fired Priyanka Pulla??


2. Why don't we see the reviewer's name underneath in most of the reviews??(it's irritating)


3. Why are you guys seem to be trying too hard to sound funny and intelligent??(in the past, reviews had that flowing and effortless quality about them)

ADVERTISEMENT
This page was tagged for
mayabazar movie 2006 review
sp balasubramaniam kubera movie
Maya Bazar telugu movie
Maya Bazar reviews
release date
Follow @fullhyderabad
Follow fullhyd.com on
About Hyderabad
The Hyderabad Community
Improve fullhyd.com
More
Our Other Local Guides
Our other sites
© Copyright 1999-2009 LRR Technologies (Hyderabad), Pvt Ltd. All rights reserved. fullhyd, fullhyderabad, Welcome To The Neighbourhood are trademarks of LRR Technologies (Hyderabad) Pvt Ltd. The textual, graphic, audio and audiovisual material in this site is protected by copyright law. You may not copy, distribute, or use this material except as necessary for your personal, non-commercial use. Any trademarks are the properties of their respective owners. More on Hyderabad, India. Jobs in Hyderabad.