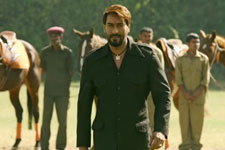 T J Reddy / fullhyd.com
EDITOR RATING
4.0
Performances
Script
Music/Soundtrack
Visuals
4.0
4.0
3.0
6.0
Suggestions
Can watch again
No
Good for kids
No
Good for dates
Yes
Wait for OTT
Yes
While every other person under the sun is busy comparing Baadshaho to Ocean's Eleven or 12 or 13 or the upcoming all-female reboot of the Ocean's franchise, it would help to take a tiny detour. Remember the good old days of 2004 when an innocent film called Malliswari hit the screens? It was an amiable film starring a princess and a pseudo-pauper with heaps of humour and character that justified its few Minority Report-inspired action sequences. Good times, right?

Say, do you also remember the okay-ish days of 2010 when a certain phenomenon titled Bodyguard slid into screens across Kerala and slowly as remakes to the rest of the country? While not as clever and re-watchable as the aforementioned Malliswari, Bodyguard was a fun enough time at the movies owing to its quirky lead character and a narrative that appealed to audiences both simple and sophisticated. Again, compelling character work prefaced any and all action sequences which followed. While these two films might not be trendsetters when it comes to this narrative trope, they are good yardsticks to compare and contrast Baadshaho with.

Using the rich women and their protectors trope, director Milan Luthria teams up with his reliable pen-man Rajat Arora to deliver a heist film set in national emergency-stricken 1975 starring a cast of characters that include a newly-crowned queen, her unmistakeably Ajay Devgn-esque bodyguard, an Arjun Rampal-inspired buff policeman, and a band of other robbers and conmen the film hopes the audience will take a liking to.

Devgn's Bhawani is commissioned by Rani Gitanjali Devi (Ileana D'Cruz) to steal her privy purse from the clutches of the evil Sanjay Gandhi-led government (though Gandhi is not overtly mentioned), and officer Seher Singh (Jamwal) is hot on their trail.

While the main band of hoodlums refute the adage "there is no honour among thieves" by substituting it with "a group that steals together stays together", the audience who are subject to their story might end up wanting more than some camaraderie amongst these recognisable faces. Pulling from the earlier examples, movies with princesses and ruffians need time to organically develop. The beginning, middle and end of such stories needn't be segregated. The bond between the groups of characters and the betrayals, if any, that they are subject to need to be grown by the screenplay and not the primary conceit. Baadshaho, unlike Malliswari and, to a lesser extent, Bodyguard, hinges on one specific and significant plot point, with a whole host of noise and contrivances added to make said plot point a viable crux for a full-fledged feature film.

Amidst all the show of physical force, over-the-top yet somehow tame gun battles, UA-classified nudity and chest-thumping line readings, I saw a whole group of audience members in my cinema hall seem as disinterested in all the proceedings as Ajay Devgn was in his performance.

A clever review of a film needs a wholly engaging or a wholly dismal film acting as the strong foundation on which the write-up stands. When a film hits neither extreme, writing about said film quickly devolves into an exercise in tedium. Most of director Milan Luthria's films have had a somewhat similar hang-up. More often than not, his films require a lead character the audience has an inherent connection with before they walk into the cinema hall to make the films palatable, be it a Dawood Ibrahim or a Silk Smitha. His track record with developing memorable characters from scratch or real life characters who are not an active part of mainstream consciousness has been hit or miss, and his latest cinematic offering painfully hobbles along its seemingly generous runtime of two hours and sixteen minutes because of it.

Trying to make the best of these less-than-stellar circumstances are one of Luthria's usual collaborators Emraan Hashmi as the Swiss-army knife of the band of crooks Dalia, and Sanjay Mishra as the low-grade version of the Keymaker from The Matrix. The two men skillfully overlap their personalities onto their thinly-written characters in a moderately successful attempt at making themselves seem more delectable than they actually are. Ajay Devgn, Ileana D'Cruz and Vidyut Jamwal, however, are in no mood to apply themselves whole-heartedly to this project for one of two reasons. National Award-winning actor Devgn and I-Get-Roles-Thanks-To-My-Granite-Body Jamwal have a severe level of disparity on the acting spectrum. While the latter is too green to pull off his role, the former could seemingly care less when it comes to adding any spark of life to those brutally dead eyes. Miss D'Cruz falls somewhere in between the two men on this continuum, and the only thing even about her presence is her immaculate costuming.

Owing to its period setting, the garbs worn by the characters and the locales they inhabit mostly garner praise for the film's production crew. While I did intend to praise them whole-heartedly, my hopes of being able to do so were quickly dashed by some shoddy car effects, wire work and set design that would be deemed sub-par by your local drama stage. Barring a few entertaining sequences, which act as the oasis, the film is as desolate as the desert its characters traverse.

For most films, there is a demographic for each of them. While I might not be the target the film intended to please, I can sense boring trite when I see it. A film with corny dialogues such as "Char din ki zindagi hai aur aaj chauta din hain", over-indulgent direction, a nonsensical final few minutes that attempt at making you believe that the film is smarter than you, and the tease of looking at Sunny Leone naked (which have all been done in better films mind you) make for a film blatantly trying to play a game at pretending to be manly and dashing like Mr Jamwal's distractingly fake Party City moustache.

P.S. Try to read up on how daring and exciting the actual events this film was based on were. Life outdoes art yet again.
Share. Save. Connect.
Tweet
BAADSHAHO SNAPSHOT 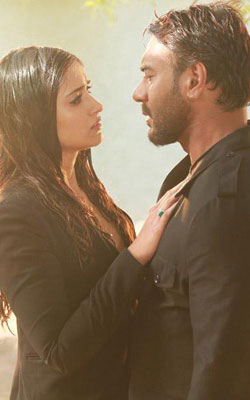 ADVERTISEMENT
This page was tagged for
baadshaho movie in hindi
ileana,dcruz,nude,in,badshah
Baadshaho hindi movie
Baadshaho reviews
release date
Follow @fullhyderabad
Follow fullhyd.com on
About Hyderabad
The Hyderabad Community
Improve fullhyd.com
More
Our Other Local Guides
Our other sites
© Copyright 1999-2009 LRR Technologies (Hyderabad), Pvt Ltd. All rights reserved. fullhyd, fullhyderabad, Welcome To The Neighbourhood are trademarks of LRR Technologies (Hyderabad) Pvt Ltd. The textual, graphic, audio and audiovisual material in this site is protected by copyright law. You may not copy, distribute, or use this material except as necessary for your personal, non-commercial use. Any trademarks are the properties of their respective owners. More on Hyderabad, India. Jobs in Hyderabad.