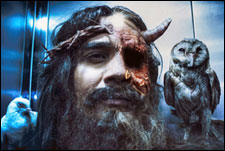 Nupur Barua / fullhyd.com
EDITOR RATING
3.0
Performances
Script
Music/Soundtrack
Visuals
4.0
3.0
4.0
5.0
Suggestions
Can watch again
No
Good for kids
No
Good for dates
No
Wait for OTT
No
The most outstanding moment in Ghost has nothing to do with ghosts or make-up, but with Detective Vijay Singh's sudden realisation that there are certain parts of his life that he cannot remember. He promptly forgets about this, once his prospective girlfriend tells him that he has what is called "retrograde amnesia". Actually, this sequence is inserted at a point in the movie when you begin to stare at the bald spot on the head of the restless man in front of you. Needless to say, this seemingly irrelevant information changes the predictable route the movie has taken so far.

The movie begins with some serious sex in the cubicle of the ladies' loo at City Hospital, between a doctor and a nurse. Actually, no - it begins with the graphic shot of CG rocks falling from the skies while a voiceover waxes eloquent about Jesus and the Devil. At 3am each morning, people get killed at City Hospital.

Enter Dr. Suhani (Sayali Bhagat), newly appointed, in her short, off-shoulder dresses, who propagates painkillers for ICU patients. She is a doctor because she wanted to emulate her father. A devout believer in reading aloud fatalistic verses from the Holy Book in times of stress, she has the privilege of discovering a corpse in a store room.

The case has to be handed over to the "most intelligent" detective in the police force, thus paving the way for Vijay Singh (Shiney Ahuja). He is given a heroic introduction, complete with a Mercedes and a song.

Before you can say "Boo!", he is in love with his prime suspect, the good doctor (he accuses her till she breaks down and quotes from Hebrew 12, and then melts). His prime objective is to now figure out why all these bodies keep popping up with their hearts ripped out.

Without further ado, here are a few traits that make Ghost Puja Jatinder Bedi's tribute (unwittingly) to the Ramsays:

- Crazy make-up, both prosthetic and otherwise. The nurse in the first scene, to freshen up after all that sex, has an entire box of make-up - this also justifies why she spends just enough time in front of the mirror in the godforsaken washroom before the ghost appears.
- Sex. Deepraj Rana smooches for longer periods than Emraan Hashmi, and then some.
- Forest of tall trees. This is where the ghost flits, with feet pointed backwards.
- Long corridors, and flickering tube-lights. Just eerie enough for the female lead to reach for her Bible and read the passage on the plague of frogs.
- Dead serious acting.
- Churches.
- White clothes.
- Hospital and morgue.
- Creepy characters without dialogues.
- Bathroom sequences.
- One super villain who has wronged not just the spirit, but others in the movie, especially the leads.
- A woman wronged.
- Footage of crimes in negative film.

A couple of twists are all it takes for the movie to be "different". The love story between the two leads is forgotten towards the end of the movie, and the ghost is an Australian (with a European accent). Spoiler alert - Jesus makes an appearance, too.

Sayali Bhagat keeps speaking in English, for some strange reason. She does a bad enough job acting in Hindi as it is.

As for Shiney Ahuja, the poor man could not have been too choosy about the movie he picked as his comeback to the industry, but Ghost? Seriously?

Tej Sapru in his prominent wig is the only actor worth watching, because he stays true to the spirit of B-grade movies of the '80s. Deepraj Rana tries his best to look lecherous, but you may end up feeling sorry for the oversexed character he plays.

Bijayeta Pradhan, who plays the nurse, could have done without the item song. And who on earth is the man with a dove on one shoulder and an owl on the other (you understand the symbolism, of course, but nobody has any idea who the actor is)?

Costumes, designed by the director herself, are largely inspired by Fashion Street and Hill Road in Mumbai. Production design is worked around television show sets. Make-up, again, is to die (laughing) for.

And the music comprises organ sounds, church bell chimes and clangs, loud clattering, whispers, and the occasional song, including a mandatory club number.

Watch the movie if you dare, because while you may cringe at the storyline and the acting, they're nothing compared to the gore that the director has deemed necessary to show in the movie. All that blood and the crucifying of the gori are what make Ghost an adult film, so leave your kids, friends and spouses behind.
Share. Save. Connect.
Tweet
GHOST SNAPSHOT

ADVERTISEMENT
This page was tagged for
Ghost hindi movie
Ghost reviews
release date
Shiney Ahuja, Sayali Bhagat
theatres list
Follow @fullhyderabad
Follow fullhyd.com on
About Hyderabad
The Hyderabad Community
Improve fullhyd.com
More
Our Other Local Guides
Our other sites
© Copyright 1999-2009 LRR Technologies (Hyderabad), Pvt Ltd. All rights reserved. fullhyd, fullhyderabad, Welcome To The Neighbourhood are trademarks of LRR Technologies (Hyderabad) Pvt Ltd. The textual, graphic, audio and audiovisual material in this site is protected by copyright law. You may not copy, distribute, or use this material except as necessary for your personal, non-commercial use. Any trademarks are the properties of their respective owners. More on Hyderabad, India. Jobs in Hyderabad.