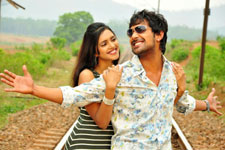 Kritika Deval / fullhyd.com
EDITOR RATING
4.0
Performances
Script
Music/Soundtrack
Visuals
5.0
4.0
5.0
6.5
Suggestions
Can watch again
No
Good for kids
No
Good for dates
Yes
Wait to rent it
Yes
The title credits roll, and you see some of the most famous lovers in history, getting your appetite all worked up for the magic of good-ol-romance churned out by someone whose movies aren't exactly the worst ever.

Our hero Shyam (Varun Sandesh), however, falls in love with Anshu (Sanchitha Padukone), over a lecture by a teacher, as he, the teacher, and a bunch of sleazy boys sit behind a rock to ogle at their female classmates as they frolic in the sea.

And, let us tell you, this isn't the worst of the absolute inanities that Chammak Challo throws at you.

It all begins when Kishore (Srinivas Avasarala) bumps into Professor Apparao Aggarwal (Sayaji Shinde) while on the lookout for the perfect love story to make a film on. Apparao goes on to narrate the charming-in-parts-and-puerile-in-others-and-just-plain-ol-silly-throughout tale of his former students, Shyam and Anshu, as they go through the vicious cycle of hate-love-hate-love... before finally reaching what seems to be the happily ever after.

And then, minutes before the interval, we find out that "ever after" is most certainly not happy. (D'uh, people! We still have another lethargic half of the movie to go through, remember?) Our fickle, weak, selfish hero is pissing "ever after" off, and frankly, we don't blame it. He is pissing us off as well, with Sandesh's annoying muffled drawl as he says "cshaala, cshaala" or anything at all, only adding fuel to the flame.

Chammak Challo, sleazily named as it is, is actually the story of what could happen if you meet the mate of your dreams after you meet your soul-mate. It could've worked. Neelakanta has given us crazier perspectives on relationships and kept us engrossed to boot. Here, though, it all fizzles out before it even begins, mostly because you have uninspiring song-and-dance sequences as replacement for character development, and because you really cannot bring yourself to care about these superficial little souls.

And, then, what is with Neelakanta and career women? Perhaps someone needs to tell him that they don't make careers out of wrecking relationships.

Varun Sandesh turns mooning stupidly into an art form, and Sanchita and Catherine are too busy pretending they are in an R S Brothers ad to act. The supporting cast, including Sayaji Shinde and Vennela Kishore, make the drag less exacerbating, but barely.

Avasarala is a fine, fine actor, and making him the lead actor rather than a plot device would have worked wonders for the movie.

The songs are as mundane and de-cerebralised as everything else in the movie.

The visuals, though, are lovely, every boring frame beautifully rendered - a further waste of perfectly good resources.

Verdict: Don't bother. Even if it plays on a TV at your home, you'll probably just change the channel without even realising it.
Share. Save. Connect.
Tweet
CHAMMAK CHALLO SNAPSHOT 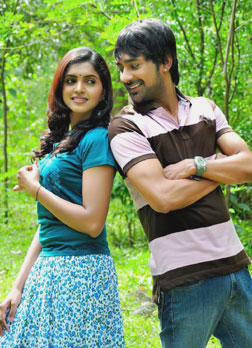 ADVERTISEMENT
This page was tagged for
Chammak Challo telugu movie
Chammak Challo reviews
release date
Varun Sandesh, Sanchita Padukone
theatres list
Follow @fullhyderabad
Follow fullhyd.com on
About Hyderabad
The Hyderabad Community
Improve fullhyd.com
More
Our Other Local Guides
Our other sites
© Copyright 1999-2009 LRR Technologies (Hyderabad), Pvt Ltd. All rights reserved. fullhyd, fullhyderabad, Welcome To The Neighbourhood are trademarks of LRR Technologies (Hyderabad) Pvt Ltd. The textual, graphic, audio and audiovisual material in this site is protected by copyright law. You may not copy, distribute, or use this material except as necessary for your personal, non-commercial use. Any trademarks are the properties of their respective owners. More on Hyderabad, India. Jobs in Hyderabad.