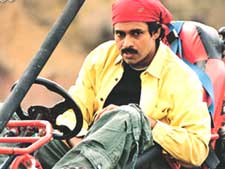 Deepa Menon / fullhyd.com
EDITOR RATING
6.0
Performances
Script
Music/Soundtrack
Visuals
NA
NA
NA
NA
Suggestions
Can watch again
NA
Good for kids
NA
Good for dates
NA
Wait for OTT
NA
There's not a whole lot to distinguish Gudumba Shankar from scores of other films, plot-wise. It's a medley of successful Hindi and Telugu flicks, including Dilwale Dulhaniya Le Jayenge, and it leans heavily on the star appeal of each one of its cast: from megastar-me-too Pavan Kalyan to funnyman Sunil.

But there's one thing that sets this movie apart: in these days of brazen flesh display, Gudumba Shankar is shocking for the sheer amount of cloth each actor is swathed in. The hero himself wears two sets of each garment, sometimes three. So here's your chance to experience the immense cool-ness of two pants, one unzipped, hanging in an extremely cool fashion off the hero's unconcerned hips. And they go perfectly with the three shirts he's got on.

Like we said, apart from that detail, Gudumba Shankar is no different from your regular love story about the obstacle race to the girl's hand, a path that's strewn with well, alright just one guy. But he's worth a lot of trouble. Ashish Vidhyarthi plays the role of a demented suitor, who will only marry for love. Of money.

Unfortunately he wants to marry the girl (Meera Jasmin) that Gudumba Shankar spent the whole first half of the movie protecting from random lechers. In film land, this establishes a deep, abiding bond between characters and when small-time crook Gudumba (Kalyan) feels stirrings in the heart region for Gowri (Jasmin), he wastes no time in saying those magic words: I heart you.

It's all very sweet and uncomplicated, except for that blaring foghorn of a goon who also wants to marry Gowri. Kumaraswamy (Vidyarthi) has his heart set on the girl, because his astrologer assures she will bring him good luck. So the wedding must happen, or the heroine's family will be wiped out. To outsmart the bridegroom and convince him to change his mind, Gudumba and his band of grinning henchmen weasel their way into the wedding house.

And it is here that all the fun happens. At least, it happens if you're feeling very forgiving, and/or are totally in love with Pavan Kalyan. If you're neither, you'll think this is a decent flick that tries its darndest to entertain you. Comedy of the very obvious sort is doled out liberally; a horny priest, a supposedly homosexual character, a bakra of a groom, and other sundry items of slapstick. The good thing about the movie is that it doesn't get serious on you for one moment. There are only two settings on the plot: alleged comedy/thumping action. No mush or crying in between. The music is all fast-paced and foot-tapping.

Given the one-dimensional roles they get to play, the actors all do a good job. Pavan Kalyan plays a character that's custom-made for him, one that doesn't require him to stretch too far beyond his um, talents. Meera Jasmin obviously has more to her, but she carries off her sidelined role with no unnecessary fuss. The pace of the film is definitely its strength; it's over before you start to fidget. And the fight scenes are gritty, inelegant and, mercifully, short. To wrap up, Pavan Kalyan's latest is no Kushi, but it's no Johnny either.
Share. Save. Connect.
Tweet
GUDUMBA SHANKAR SNAPSHOT

ADVERTISEMENT
This page was tagged for
gudumbhashankar pawankalyan photos
Gudumba Shankar telugu movie
Gudumba Shankar reviews
release date
Pawan Kalyan, Meera Jasmine
Follow @fullhyderabad
Follow fullhyd.com on
About Hyderabad
The Hyderabad Community
Improve fullhyd.com
More
Our Other Local Guides
Our other sites
© Copyright 1999-2009 LRR Technologies (Hyderabad), Pvt Ltd. All rights reserved. fullhyd, fullhyderabad, Welcome To The Neighbourhood are trademarks of LRR Technologies (Hyderabad) Pvt Ltd. The textual, graphic, audio and audiovisual material in this site is protected by copyright law. You may not copy, distribute, or use this material except as necessary for your personal, non-commercial use. Any trademarks are the properties of their respective owners. More on Hyderabad, India. Jobs in Hyderabad.