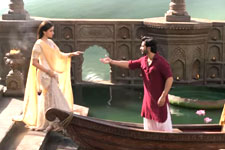 T J Reddy thanks you for your silence in advance.

A moment of quiet contemplation later.

I wonder, if a lowly film-reviewer like myself spends a few hours coming up with a concept for his review and spends a few more hours trying to execute it to its fullest potential without coming off as predominantly pompous or exceptionally obtuse, how much time and thought goes into conceptualising and mounting a multi-crore, multi-starrer a la Kalank. It would take years out of a person's life trying to come up with a story that appeals to every quadrant and demographic. The returns on investment need to be maximised while staying true to the art form through which the story is presented.

I tried seeing the world through co-writer/director Abhishek Varman's eyes. One of his producers (Karan Johar) had constantly raved about and had also previously purchased the distribution rights to mega-blockbuster Bahubali. He (Varman) was presented with a story set in pre-partition India with 6 entangled characters and was tasked to make it an epic for the ages. There was Roop (Alia Bhatt) who was forced into marrying Dev Chaudhary (Aditya Roy Kapur). Dev was none too keen on marrying Roop himself and agreed to do so only as it was the final wish of his dying wife Satya (Sonakshi Sinha). A heartbroken Roop found solace via two avenues; one, while practising singing with Bahaar Begum (Madhuri Dixit), and two, while exploring Hira Mandi with blacksmith extraordinaire Zafar (Varun Dhawan).

Romance began blossoming between Roop and Zafar, but their love is forbidden due to the former being married and the latter being a Muslim. The patriarch of the Chaudhary clan, Balraj (Sanjay Dutt), knows all too well about the ills of illicit affairs, and warns his son against distancing himself from his new bride.

Will these crazy kids get their act together and bring themselves closer to happiness with the power of love or will they separate first and ask questions later? Will the mentality of the political parties of pre-partition India affect their decision making?

An amalgamation of the personal and the political could have made for an ambitious display of avant-garde commercial filmmaking, but with so many overwhelming questions being asked and with so many characters to juggle, Kalank simplifies its storytelling by stowing away its ambition and comfortably resting on the power of standard Bollywood romance and the hot-button political issues of the present day.

The cast and crew of this film looked at the epics of yore and made their offering resemble those beloved cinematic classics. The sets instantly became large; the characters walked, talked and acted akin to poetry being in motion; the movement of dupattas, saris and curtains seemed forever aligned with the background score; and no character, rich or poor, ever had a hair out of place.

Maybe I should simplify my review, too. Stop overthinking about how to set myself apart. What could I say that hasn't already been said? Billy Shakes did say there are only 7 stories that have ever been told. Maybe there are only a handful of review templates too.

But then again, isn't it the job of a storyteller to make a so-called well-worn story interesting with his/her unique way of narrating it? I mean, Bahubali was no different from The Lion King, but what made it fun to watch were its characters and their conflicts. S S Rajamouli reinvented Ramya Krishnan and set his story apart in the first set piece by having Sivagami hoist a baby up as she was inundated by a deluge. And that was some scene.

Kalank, on the other hand, casts Madhuri Dixit and has her sing and dance, which only serves as a reminder of her turn as Chandramukhi in Devdas. She was a part of the harem then; she heads the harem now. Congrats to Bahaar Begum on her promotion, but when will the storytelling take her cue and jump onto the next echelon? The filmmakers needn't reinvent the wheel per se, but could have used it as a part of a bicycle. With Kalank, the wheel stays as is, and is merrily rolled around the street by an enthusiastic lad who is seemingly content with what he has.

Varman's misguided enthusiasm seeps into his crew and most of his cast. Varun Dhawan does some of the best work and working out of his career as Zafar. Playing a character whose quest carries the film's narrative, Dhawan is in equal parts electric and despicable. But the film's cold feet stop it from exploring his despicable nature, hence keeping it from being compelling.

Alia Bhatt does her usual Alia Bhatt-ing by crying, screaming, smiling and falling in love with a character played by Varun Dhawan, but the film never shows you the gravity of her decisions, hence keeping it from being gripping.

Aditya Roy Kapur is prim and proper as the rich Chaudhary Jr, but is as two-dimensional as a character gets. And losing another dimension with age is Sanjay Dutt's Chaudhary Sr, whose arc and backstory can be seen coming from a mile away. And with these conveniences written into its script, the film stifles itself from being anything more than a forgettable puff piece with actors and technicians who have fulfilled these exact roles in much better offerings in times gone by.

Kunal Khemu does well in his role but is nowhere to be seen on the film's poster, and is credited as a guest actor.

And therein lies the fatal folly of the film - the grand music, the opulent costumes and the bargain basement storytelling cover up any semblance of identity it could have had. The more I speak about these aspects of the film, the more I may encourage people to forget that compelling characters and narratives were short-changed for spectacle. And as we have been told time and time again, beauty is only skin deep. Like a bad date with a good-looking partner who has little between the ears, the movie told me all that I needed to know within the first 15 minutes, and the next two and half hours of my life were spent with it because I like hurting myself by being courteous.

Now, let me write that review. 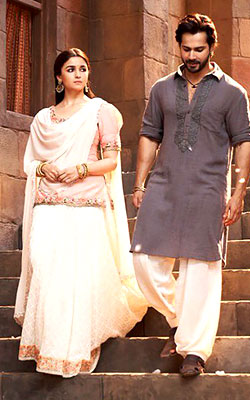 ADVERTISEMENT
This page was tagged for
Kalank movie counter4 me
can kids watch kalank movie
kalank movie review hyderabad
Kalank hindi movie
Kalank reviews
Follow @fullhyderabad
Follow fullhyd.com on
About Hyderabad
The Hyderabad Community
Improve fullhyd.com
More
Our Other Local Guides
Our other sites
© Copyright 1999-2009 LRR Technologies (Hyderabad), Pvt Ltd. All rights reserved. fullhyd, fullhyderabad, Welcome To The Neighbourhood are trademarks of LRR Technologies (Hyderabad) Pvt Ltd. The textual, graphic, audio and audiovisual material in this site is protected by copyright law. You may not copy, distribute, or use this material except as necessary for your personal, non-commercial use. Any trademarks are the properties of their respective owners. More on Hyderabad, India. Jobs in Hyderabad.