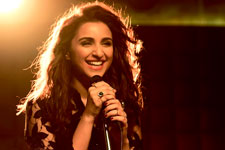 Indranil Majumdar / fullhyd.com
EDITOR RATING
7.0
Performances
Script
Music/Soundtrack
Visuals
7.5
6.5
8.0
8.0
Suggestions
Can watch again
Yes
Good for kids
No
Good for dates
Yes
Wait for OTT
No
In the 1960 Italian film La Dolce Vita, a helicopter transports a statue of Christ over a Roman landscape. Meri Pyaari Bindu somewhat replicates that cult scene, except here it is a statue of Goddess Durga being carried over the lanes of North Kolkata to Babughat for immersion. The sky is a mixture of a shade each of sanguine red and light yellow. Abhimanyu Roy (Ayushmann Khurrana), a writer of pulp fiction, is contemplating suicide. He stands on the edge of a terrace, hands flung wide, and is ready to let go. He doesn't. He snaps back into reality, and we get to learn that what transpired is, in fact, a scene from one of the pages of a book Abhimanyu has been trying to write for three long years.

It's a breathtaking start to the film, and we as audiences are immediately in on what the rest of it has to say. The remainder of the film thankfully is built upon more hits than misses.

Meri Pyaari Bindu is a captivating film with an even more captivating premise. It is an aching love letter to anyone who has every dared to love and has not had his/her love reciprocated. It bears testimony to the fact that love is as twisted an emotion as any, and as engulfing a force as any. But what the film mostly wants to say is that life is as bad as we make it out to be, and that there is absolutely nothing in the world that is irreparable. The movie might have pain at its very core, but what it truly advocates is hope.

In truth, Meri Pyaari Bindu is actually meta-cinema at perhaps its finest. The film prances around its runtime through the use of careful and succinct prose, but in actuality the film is prose in itself. It is a novella demanding to be read, a novella that has all the ingredients of and all the structural similarities to any other work of fiction. There is an exposition, a climax and a resolution. The resolution is of the kind that may not appeal to many, but is exactly where Meri Pyaari Bindu steers clear of other Indian films cast in the same mould.

The film's title is derived from a quirky song from the 1968 Indian comedy film Padosan. Meri Pyaari Bindu is the story of Abhimanyu Roy and Bindu Shankar Narayanan (Parineeti Chopra). They've known each other ever since Bindu's family moved into the same locality as that of Abhimanyu. Abhimanyu falls in love with her at first sight. Unfortunately, it's not vice versa.

The first half of the film shows how grown-up Abhimanyu and Bindu are just great friends although Abhimanyu still harbours feelings for Bindu. It exposes the pain under the smile that Abhimanyu feigns and the insecurities that Abhimanyu hides away in the form of silly taunts, just so as to feel insulated in Bindu's company. Abhimanyu, in a voice-over, says that a lot of people teach one how to love, but very rarely does any of them give a lesson on how to get over that love. This is Abhimanyu's conundrum, his tryst with unrequited love.

The second half is all about dismantling the notion that although the best of friends could, at some point in time, end up being each other's beloved, their bond might not stand the test of time. Director Akshay Roy and writer Suprotim Sengupta churn out a poignant tale that embodies the very spirit of romance. They theorise that compassion isn't merely an emotion, but an outcome of a lot of time- and space-bound constraints. Roy and Sengupta treat love like veteran doctors with an eye for meticulous detail, and the surgical procedures are stunning to watch.

Khurrana, once touted as the next big thing in the industry, has now become a full-blown force to reckon with. He leaves you asking for more in every frame that he belongs in. Great acting is as much an outcome of expressing the right way as it is of knowing when to underutilise your expressions, and Khurrana has mastered that art.

Chopra delivers a restrained performance, but it doesn't help that her character breaks into a song ever so frequently. She shines in parts, and Meri Pyaari Bindu is a decent comeback for an actress for who the going has been tough owing to some appalling film choices. Aparajita Auddy and Rajatabha Dutta play Khurrana's parents with aplomb and are a treat to watch.

The clear winner in the film though is its music. Sachin-Jigar are in inspired form as they lend a beautiful soundtrack to Meri Pyaari Bindu. Haareya and Afeemi are right out of the top draw, and Parineeti's version of Aaj Jaane Ki Zid Naa Karo is impressive. The sound editing and the sound mixing in the film are fantastic accomplishments. To weave in songs by Lata Mangeshkar, Kishore Kumar and Manna Dey into a modern narrative was a masterstroke, and the inclusion of cassettes will certainly remind you of Dum Laga Ke Haisha and reconfirm Yash Raj Films' veneration for a bygone era.

Tushar Kanti Ray, the film's cinematographer, is quite frankly an artist at work in the film. He captures the streets and the by-lanes of North Kolkata with prolific ease and able craftsmanship. The shots of Mumbai are reminiscent of those from Wake Up Sid, and show how a city acts not just as a source of refuge but as a character. Ray makes Kolkata and Mumbai breathe, and that is quite a commendable feat.

The film does not work at some junctures, though. In trying to tell a story of astronomical consequences to two characters, the narrative shifts way too much between timelines, and sometimes defies all rationale. Secondly, you wish Abhimanyu's inclination for pulp fiction was explored some more, and are ultimately left slightly dejected.

Despite minor flaws, Meri Pyaari Bindu is a courageous film, and one that India needs more and more of. It is a rebel with a cause, and reveals to you romance in its most naked state. It tells you that life is what happens to you at the crossroads of a 'happily-ever-after' and an 'it-could-have-been-so', and that is a thought that must be championed.
Share. Save. Connect.
Tweet
MERI PYAARI BINDU SNAPSHOT 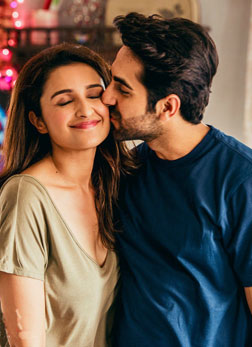 ADVERTISEMENT
This page was tagged for
the meri pyaari bindu movie hd in hindi
meri pyaari bindu man movie in hindi
meri pyaari bindu dual audio english hindi
meri pyaari bindu movie in hindi
Meri Pyaari Bindu hindi movie
Follow @fullhyderabad
Follow fullhyd.com on
About Hyderabad
The Hyderabad Community
Improve fullhyd.com
More
Our Other Local Guides
Our other sites
© Copyright 1999-2009 LRR Technologies (Hyderabad), Pvt Ltd. All rights reserved. fullhyd, fullhyderabad, Welcome To The Neighbourhood are trademarks of LRR Technologies (Hyderabad) Pvt Ltd. The textual, graphic, audio and audiovisual material in this site is protected by copyright law. You may not copy, distribute, or use this material except as necessary for your personal, non-commercial use. Any trademarks are the properties of their respective owners. More on Hyderabad, India. Jobs in Hyderabad.