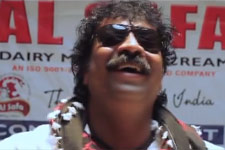 Kritika Deval / fullhyd.com
EDITOR RATING
6.0
Performances
Script
Music/Soundtrack
Visuals
6.0
5.0
4.5
6.0
Suggestions
Can watch again
Yes
Good for kids
Yes
Good for dates
Yes
Wait for OTT
No
7 years ago, something happened. It changed things. It made us fall in love with the Hyderabadi culture (the kind we see as ours, and the kind we let vicariously amuse us), and spawned this, this, this, and this. It showed us that the city has an entire genre of worth of cinema hidden within. And, like all others, this one too has its share of the good, the bad, the ugly.

Ek Tha Sardaar is one that is particularly hard to place. The story itself is straight out of Stereotopia (a pulled-out-of-behind amalgamation of stereotype and Utopia). It begins with the death of Sardar (Mohammed Taufeeq), a fugitive, and then, amidst a tableau of the most delightfully ironic mourning (that's the thing about Hyderabadi slang and mannerisms - when done right, they can make anything seem ironic), flashes back to his beginnings as an autorickshaw driver in the Old City.

Sardaar is poor of money, but has a heart of gold. He is gentle, kind to his mother, takes care of his slacker pals, and dreams of a chaand ka tukda to adorn his humble home and hearth. On the other hand, he is also enough of a man's man as to not be afraid to get down and dirty when he feels it to be necessary (read: stare angrily at opponent while yelling at him and trying to walk into a knife held in his hand).

So, when this gentle tiger (y'all see where we're coming from) is faced with an insurmountable enemy, what must he do but stand up to it, all the while juggling the wooing of the aforementioned chaand ka tukda, his mother, his friends, and life as a rickshawallah, and eventually go underground?

By this time, ennui has set in, because that's what ennui does. It scopes for minds that are not full to the brim with jokes about paya and baagi log (there was a lot of confused laughter at the one about the latter - the aforementioned comment about the irony inherent in our dialect works both ways), and just sets in.

Ennui is what makes your mind think of things like, why, if Sardar's story is supposed to be so engrossing, does the movie take you away from it for 10s and 15s of minutes to tell you about the slap-stick (lots of slaps and sticks involved) shenanigans of his good-for-nothing friends? Ennui also eggs your brain on when niggling strands of neural activity tell you that, really, a movie that is two hours and 15 minutes in length probably shouldn't take so much time to get to the point, because the point doesn't show up until after the interval.

Ek Tha Sardar has plenty of the Good in it. Unlike other attempts to replicate the success of The Angrez, the humour in ETS is as gentle as it is earnest. It mostly pokes benign fun at the malignancy of the human condition, except when it is trying to woo the kind of audience that wouldn't get gentle if gentle gently whacked them on the head.

However, all that poking is not really going to get them anywhere unless it leads to the story getting somewhere. Eventually, when things do speed up, it feels as if the story ended when it really began. Of course, it doesn't help much that there really hasn't been much of an attempt to maintain a suspense of any kind.

The biggest strength of Ek Tha Sardar is that it turns two-dimensional caricatures into real people, gives them personalities that you can like or dislike, and still maintains the caricature-ishness. As long as that is all you're looking at, you're pretty much good to go.

The actors including Adnan Sajid Khan, Aziz Naser, Akbar Bin Tabar, Aziz Rizwan and Narsing Yadav etc. who have literally been sticking to their shtick since 2007, give deliciously nonchalant performances as usual. Mohd Taufeeq, the star and the producer, doesn't really have all that much scope, but does as well as he can. Nikita Chhetra is quite pretty, and does a commendable job.

The cinematography is quite impressive, and shows that the man helming the camera really knows his stuff. As far as the setting is concerned, we are delighted to note that the last thing that this movie is is an unsolicited ad for the charms of the Charminar. There is nothing here for the lazy people who'd rather look at historical monuments in a movie than actually come down to our city and help us make more money. This is a film about people with a story worth telling, who just happen to be dwellers of Old City.

Just like every other story set in a particular area, this one too is true to its surroundings, without being too overtly obvious, like a woman who knows she does not have to strap on prosthetic breasts to make others notice that she is a woman.

There is much that can be said in favour of ETS, which is basically a film born of love and a desire to make good cinema.

The worst part was the lead actor Taufik yes he was blunder its understud the he himself is producing this movie but he is very week in acting the heroin was looking his grand daughter
In fight he was very funny he knows nothing
gsmehfil on 28th Oct 2013, 3:11am | Permalink
watch live streaming of Watch WWE Hell In A Cell 2013 – October 27th 2013 – 10/27/13

ADVERTISEMENT
This page was tagged for
Ek tha Sardaar: hyderabadi movie
Ek Tha Sardar
Ek Tha Sardar hindi movie
Ek Tha Sardar reviews
release date
Follow @fullhyderabad
Follow fullhyd.com on
About Hyderabad
The Hyderabad Community
Improve fullhyd.com
More
Our Other Local Guides
Our other sites
© Copyright 1999-2009 LRR Technologies (Hyderabad), Pvt Ltd. All rights reserved. fullhyd, fullhyderabad, Welcome To The Neighbourhood are trademarks of LRR Technologies (Hyderabad) Pvt Ltd. The textual, graphic, audio and audiovisual material in this site is protected by copyright law. You may not copy, distribute, or use this material except as necessary for your personal, non-commercial use. Any trademarks are the properties of their respective owners. More on Hyderabad, India. Jobs in Hyderabad.