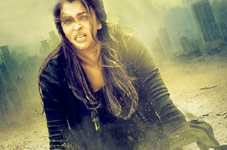 The camera captures her running in slow motion in a parents' race at her daughter's Sports Day event before the little girl is abducted, and Ash starts screaming frantically for her. All 500 people present at the event simply walk off, leaving a lone woman screaming hysterically for her daughter in an empty field.

That scene encapsulates Sanjay Gupta's cinematic vision for this film - capitalize on Ash's beauty, make her scream her lungs out (as opposed to act), stuff the script full of improbabilities, and finally, leave Ash all alone to deal with the aftermath.

Jazbaa is an adaptation of the Korean film Seven Days, and tells the story of Anuradha Verma (Aishwarya Rai Bachchan), the most sought after criminal lawyer in the country. An unknown person kidnaps her daughter, and the ransom demanded is that she must use her skills to free a rapist-murderer on trial.

She begins investigating the case, and is helped by her friend Inspector Yohaan (Irrfan Khan). The duo soon realize that they've opened the proverbial can of worms, and the trajectory of the story twists this way and that.

Considering that she was on a five-year-long hiatus, Rai's performance isn't as shaky as you might expect. Indeed, it is painfully sincere and earnest. We say painfully because she does show growth, but two old nemeses continue to haunt her - poor dialogue delivery and overacting. And while Rai will have to shoulder the blame for the first criticism alone, Gupta must take one squarely on the jaw for the second.

Indeed, the story affords ample opportunity for powerful drama - the protagonist is a distraught mother fighting to save her child's life. However, Gupta adds four little letters to the drama (namely m, e, l, o) and what you have is cringe-worthy melodrama.

Gupta's approach to handling emotionally intense scenes is simple - screaming is equal to acting. You can almost imagine him telling Rai, "Okay, Aishwarya, scream till your vocal chords hurt." Mr. Gupta - our ears hurt, too. One particular sequence deserves special mention. Right before the intermission, Verma loses a significant opportunity to save her daughter. She screams like a demented banshee. And then, screams some more. The intermission sign flashes on the screen. You walk out to stop the ringing in your ears, return after 5 minutes, and the second half opens with Verma still screaming. That auditory ambush made your reviewer spill half her popcorn.

Gupta as co-writer must also take flak for failing to develop the main lead convincingly. She's supposedly a tough, hardened criminal lawyer used to dealing with sinister people. Yet, Rai spends a majority of the film weeping, screaming and flailing her arms helplessly. The Bollywood penchant for the hero as the saviour is carefully hidden, but it comes across loud and clear after the intermission, when Verma shares her predicament with Yohaan who declares, "Jung toh ab shuru hogi", thus negating all her histrionics in the first half.

That brings us to our favourite part of the film - Irrfan Khan. His casting in Jazbaa is like setting a diamond in a copper ring - Gupta's sepia-tinted vehicle is unable to do justice to his sparkling performance. Inspector Yohaan is a rebellious smartass, and Khan mostly surmounts the shoddy direction and script, and imbues his character with both swagger and seriousness. He's given lots of entertaining wisecracks to mouth, but in places, their frenetic pacing affects your enjoyment. One quip quickly follows the next, and you don't have time to savour the dialogue-writing.

Shabana Azmi is not as lucky as Irrfan Khan, and the Gupta Curse affects her performance as the grieving mother of the murdered girl. Her character's confrontations with Verma, and the motherhood trope, were obviously meant to add some kind of feminist heft to the film. However, Azmi looks distinctly out of place and uncomfortable, and it doesn't help that her chemistry with Rai is as thanda as the Pepsi the latter endorsed all those years ago.

The fact is, the weak screenplay affects every performance in the film. It's full of loopholes, improbable situations, and, worst of all, pseudo-pontification about rape, which is not helped by the makers showing the rape scene 3 to 4 times, thus giving it an unintentionally lascivious feel. The final twist will not surprise the alert viewer who will use a simple process of elimination to reach the conclusion 20 minutes before Anuradha Verma.

Jazbaa uses slick and stylish visuals, as do all of Gupta's films, but we wish he'd tone down the use of yellow and green lighting; it's starting to mirror his over-the-top emotional sensibility. The pace is frenetic for most of the film, but the first one hour tests your patience with full speed driving down roads that lead nowhere. Thankfully, the second half is stronger and more interesting. The music is average, and used in the strangest way in the film - the soulful "Jaane Tere Shehar Ka" is immediately followed by the item number "Aaaj Raat Ka Scene". Jarring, yes, but that seems to be the general trend in this movie.

Finally, does Jazbaa succeed as a comeback film for Rai? Paradoxically, it does. The inherent flaws in the film highlight that she's done her best in a limited creative atmosphere, and that her biggest mistake was choosing the wrong type of project.
Share. Save. Connect.
Tweet
JAZBAA SNAPSHOT 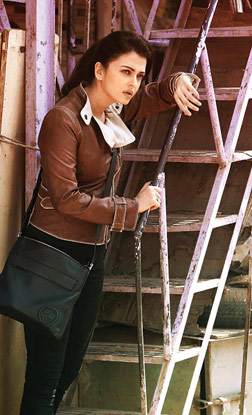 ADVERTISEMENT
This page was tagged for
jazbaa hindi
Jazbaa hindi movie
Jazbaa reviews
release date
Aishwarya Rai Bachchan, Irrfan Khan
Follow @fullhyderabad
Follow fullhyd.com on
About Hyderabad
The Hyderabad Community
Improve fullhyd.com
More
Our Other Local Guides
Our other sites
© Copyright 1999-2009 LRR Technologies (Hyderabad), Pvt Ltd. All rights reserved. fullhyd, fullhyderabad, Welcome To The Neighbourhood are trademarks of LRR Technologies (Hyderabad) Pvt Ltd. The textual, graphic, audio and audiovisual material in this site is protected by copyright law. You may not copy, distribute, or use this material except as necessary for your personal, non-commercial use. Any trademarks are the properties of their respective owners. More on Hyderabad, India. Jobs in Hyderabad.