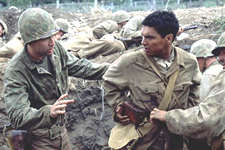 Imagine you go to a restaurant and order some hot chocolate, and the waiter returns with an omlette. You try to explain that it was not what you had ordered, but the waiter shrugs, as if to say that was not his fault. Bemusing? Watching Windtalkers is a bit like that, because what you think you'd get and what you end up getting are wildly different.

During WW II, the American forces needed a foolproof way to keep their radio communications secure from the Japanese. Their elegantly simple solution was to enlist Navajo Americans and utilize their native language as a code, while doing their utmost to protect the code and the code speakers. 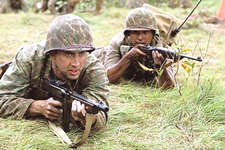 Windtalkers is about a Marine Joe Enders (Nicolas Cage). He is assigned to one of the Navajo code talkers, Yahzee (Adam Beach), with orders to protect the code. He is to protect him if he can, but kill him if he has to in order to keep the code talker out of enemy hands. Before long the two are thrown into battle in the Pacific theater where Yahzee is brought face to face with the horrors of war and Enders must battle the demons from his last command, which left him severely wounded and the sole survivor.

The anatomy of the code, from conception to execution, is intriguing to watch, but despite the fascinating possibilities offered by the film's premise, Windtalkers ends up being a painfully mediocre war film. Part of the problem is director John Woo's undivided attention on creating drawn-out, graphically violent and extremely loud scenes of brutal warfare. Yes, war is hell, but this looks more like an exercise in special effects and technical proficiency than any serious attempt at storytelling. 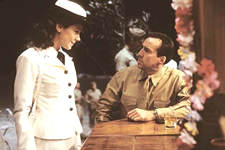 We learn a little about Enders. We also learn just enough about Yahzee, the code talker, to find him to be a nice guy and not want to see him die. That's about it for real character development. The movie is battle sequence after gory battle sequence with very little downtime in between. "Overkill" is an understatement.

Another major problem the movie suffers from is plausibility. Nicolas Cage kills seemingly hundreds of Japanese at a time with his gun, bullets fly above for 2 hours and 15 minutes without hitting the main actors, and soldiers reflect in the middle of a firefight. Just like good old Bollywood. Frances O'Connor - the young nurse - is writing kind letter after letter to Cage, yet he can't be bothered to collect his mail or read the letters most of the time. Mail call is always a high point of a soldier's day, as it is an escape from the war and a return to the homes they long to return to.

Christian Slater is good in a supportive role assigned the task of watching a fellow code-talker, but his moments are too few. Likewise, Adam Beach does a great job with his portrayal of Yahzee as a man who is following his heart in defending his country and who is forced to endure the horrors of war in order to survive, but there simply isn't enough meat for him to soar.

That is also true of the flick as a whole. It has its moments, but in the end, the bombs, the explosions and the countless broken body parts detract from the actual story. (After Face Off, Mission Impossible II and Broken Arrow from the same director, is it any wonder?)

ADVERTISEMENT
This page was tagged for
Windtalkers english movie
Windtalkers reviews
release date
Nicolas Cage, Adam Beach
theatres list
Follow @fullhyderabad
Follow fullhyd.com on
About Hyderabad
The Hyderabad Community
Improve fullhyd.com
More
Our Other Local Guides
Our other sites
© Copyright 1999-2009 LRR Technologies (Hyderabad), Pvt Ltd. All rights reserved. fullhyd, fullhyderabad, Welcome To The Neighbourhood are trademarks of LRR Technologies (Hyderabad) Pvt Ltd. The textual, graphic, audio and audiovisual material in this site is protected by copyright law. You may not copy, distribute, or use this material except as necessary for your personal, non-commercial use. Any trademarks are the properties of their respective owners. More on Hyderabad, India. Jobs in Hyderabad.