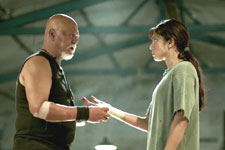 Nupur Barua / fullhyd.com
EDITOR RATING
4.0
Performances
Script
Music/Soundtrack
Visuals
7.0
4.0
5.0
6.0
Suggestions
Can watch again
No
Good for kids
No
Good for dates
Yes
Wait to rent it
No
At a recent special screening of Mary Kom (the movie), the real Mary Kom was overcome by emotion and collapsed in tears, in the arms of Priyanka Chopra. The actor was in a hurry, because she was on her way out of town to promote the film, but she could not leave the boxer alone, could she? This makes for an interesting story, but the point is this - why did Mary Kom cry? Was it gratitude for a portrayal of her life? Or was it just the opposite?

After watching the movie, you may just believe that it was the latter. It is never easy to make a biopic on a sportsperson, or any biopic for that matter, without ruffling a few feathers of those insistent on the toning down of fictionalisation. Omung Kumar, however, gleefully exploits his right to cinematic liberty, and gives us a version of a life that did not, in reality, have so much drama.

Chungneijang (Priyanka Chopra) is the eldest daughter of a farmer (Robin Das) and his wife (Rajni Basumatary). Her childhood obsession with boxing is not something her father, a former wrestler, encourages. As a teenager, Chungneijang loves to beat up errant boys, at the risk of getting her face marred. Her father enrols her in an athletic program, but she manages to catch the eye of the Manipur state boxing coach, M Narjit Singh (Sunil Thapa), and soon enough, begins training under him.

When she is selected for a State tournament, Coach Singh renames her Mary Kom, since her real name is a mouthful. She wins the tournament, but her father is still upset with her defiance. It is only when she enters the National Finals that he finally accepts who his daughter is destined to become.

Onler (Darshan Kumaar) is the local football captain, and he is fascinated by Mary. After a period of dating, the two get married, but only after he promises her that he will never get in the way of her boxing. Coach Singh sulks, knowing that marriage changes things. Sure enough, Mary has to give up her career because she is pregnant. After a complicated delivery, in which she delivers twins, Onler encourages her to think about boxing again.

Despite much resistance from the Federation of Boxing and from other people, Mary resumes training under Coach Singh, with whom she has now reconciled. However, her duties and emotions as a mother still interfere with her ability to reclaim her status as a champion.

Mary Kom is the pride of our nation. Which is why the screenplay does not do any justice to her life. Omung Kumar, originally an art director, spends too much time in the beginning dealing with her anger issues and her inability to stand up to her father. Once she becomes famous, those issues disappear without explanation. She then becomes a boxer, but there is no structure in the build-up (or lack of) to her achievements. She also meets the love of her life, but the script does not have a love story.

Instead, what Kumar gives us are snapshots of certain days in her life. The entire movie looks like one long trailer. Needless to say, the fictionalisation of most of the aspects in Mary Kom's life seems just that - fictionalisation. For example, Mary first met Onler when she was already a boxer. In the movie, they meet at a betting game, in which she gets beaten up in the ring by a heavyweight man. This unconventional first meeting should have led up to a beautiful love story, but it does not.

Although certain sequences begin with a mention of the place and year, most of the times it is not clear where Mary is. Everything seems to be next door, and it is somehow strange that Onler is always present at her tournaments, without explanation, given that they are not even dating (according to the movie).

The biggest flaw, besides the fact that Priyanka Chopra plays the role of a Manipuri woman, is the language. Yes, they do have Manipuri phrases in the dialogues, but when the actors speak Hindi, they sound more like stereotyped Nepali watchmen and uneducated North Indian villagers than Manipuri folk. An accent consultant would have helped.

Given that the story is set in Manipur, you expect certain issues to be highlighted - the insurgency, the alienation of the people from the rest of the country, and the lack of infrastructure and sporting facilities, to name a few. Except for one scene in which Kom accuses the judges of bias because she is from Manipur - a scene that has no basis for the dialogue - the writer and the director do not touch upon any of these issues. Everything is superficial, even the emotions.

Some of the dramatic moments are unintentionally funny, and very cheesy. Also, be prepared to stand up for the National Anthem at the end, before your fellow audience member prompts you to. This is the director's subtle hint that the movie is over. However, do stay back for the end titles, because the real images of Mary Kom and her family almost make up for the shallowness of this movie. Almost.

Priyanka Chopra immerses herself in the role, freckles and all. She recently said that while she believes that an actor from the region would have been a better choice to play the boxer, there was no way she was going to let go of a role of a lifetime. She is the only spark in an otherwise insipid tale, because her sincerity shows, and Mary Kom, as we all know, is one of the most sincere sports personalities of our country.

Darshan Kumaar is a promising actor, but he seems nervous in front of his towering co-star. Also, the absolute lack of chemistry between the two of them make him appear quite irrelevant - while Kom has other things to do, like boxing, Onler only has to be the supportive husband (which the actor portrays convincingly enough, but the spark is missing).

Sunil Thapa looks disgusted with everything, throughout. And some of the peripheral actors are simply wasted - it is almost as if they were summoned just to fill the frame.

Omung Kumar, or rather his wife, spent some time on designing the sets, especially the interiors. However, the production design fails to capture the mood of the movie. The costumes are above average, in contrast. The cinematography is great in some of the boxing sequences, but in general just sleepwalks through the movie, without much thought for the actor or the set. The music is decent, and the editing, lazy.

If you want to know about the real Mary Kom, we suggest you try the Wikipedia page on her. It has more interesting information, albeit limited, than the movie. To come back to the boxer's crying fit - we assume she was upset that the story did not mention her World ranking, or her efforts to combat sexual violence in Manipur. And again, remember to stay on after the National Anthem at the end.
Share. Save. Connect.
Tweet
MARY KOM SNAPSHOT 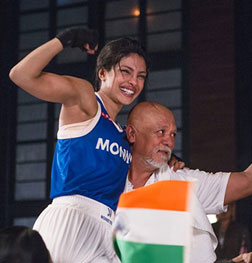 ADVERTISEMENT
This page was tagged for
cinematography mary kim movie
Mary Kom hindi movie
Mary Kom reviews
release date
Priyanka Chopra, Darshan Kumaar
Follow @fullhyderabad
Follow fullhyd.com on
About Hyderabad
The Hyderabad Community
Improve fullhyd.com
More
Our Other Local Guides
Our other sites
© Copyright 1999-2009 LRR Technologies (Hyderabad), Pvt Ltd. All rights reserved. fullhyd, fullhyderabad, Welcome To The Neighbourhood are trademarks of LRR Technologies (Hyderabad) Pvt Ltd. The textual, graphic, audio and audiovisual material in this site is protected by copyright law. You may not copy, distribute, or use this material except as necessary for your personal, non-commercial use. Any trademarks are the properties of their respective owners. More on Hyderabad, India. Jobs in Hyderabad.