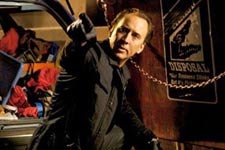 Kritika Deval / fullhyd.com
EDITOR RATING
5.0
Performances
Script
Music/Soundtrack
Visuals
6.0
4.0
5.0
7.0
Suggestions
Can watch again
No
Good for kids
No
Good for dates
No
Wait for OTT
Yes
A good 'ol Cage pummel-and-wreck-fest is the cinematic equivalent of comfort food. Defined as "food that is simply prepared and gives a sense of well-being", comfort food - like a double-cheese pizza, or Maggi, or a bag of potato chips - is stuff you generally can't go wrong with. However, like a double-cheese pizza from a cheap south-Indian "Darshini"-style restaurant, Stolen actually manages to do just that.

A tired amalgamation of Taken and Gone In Sixty Seconds, Stolen fails to justify the sole reason for its existence, i.e., to convince people to part with their money. What it does justify is its name, for reasons that will be made obvious as you read the plot.

Bank robber Will Montgomery (Nicolas Cage) is the baap of all bank robbers. He has his little team of fat old wimp Hoyt ( M C Gainey), feisty woman Riley (Malin ?kerman), and loose cannon Vincent ( Danny Huston). When a job goes wrong, thanks to the loose cannon doing what loose cannons do best - i.e. ,go crazy, try to kill people that don't really need killing, and get shot in the foot in the process, Montgomery ends up in prison for eight years.

Once he gets out, for no comprehensible reason, he decides he wants to be good and patch up with his now-teenage daughter. However, loose cannon - minus a leg - pops up from the past, announces that everything that messed up his life is because of Montgomery, and kidnaps the guy's daughter pretending to be a cab driver. Montgomery has 12 hours to cough up the 10 million dollars that he was supposed to have stashed away during the aforementioned job-gone-wrong, with rusty cop Tim Harlend (Danny Huston) hot on his heels.

A movie that should've gotten over in an hour at the most, Stolen is dragged on till well beyond its welcome by all sorts of "plot devices" that are so predictable, that at every point in the movie, you can tell at least a half hour into the future.

While the cheesy '80s-style chase sequences are actually quite fun, giving you the strange satisfaction you get by watching things get blown up and destroyed that was conditioned into all of us from the first time we saw Tom & Jerry, the movie itself is so chock-full of clichés that there is no room for surprises.

The daughter (Sami Gayle) is persistently unpleasant when she's not sedated. Vincent is the craaaaazy villain who is dead inside. We know he's craaaazy because he looks crazy and talks crazy and therefore... Then you have the hardened cop who unwillingly respects his "resourceful" quarry (CLICHE ANYONE???).

Cage's performance is as tired and auto-pilot as the script is. The only performances worth mentioning are those by Danny Huston and Malin Ackerman. That they manage to do their bit despite the rigidity and the predictability of the job is definitely worth admiring.

The setting, New Orleans during Mardi Gras madness, is as obvious as it gets, but the visuals, especially the chases, have been decently executed. Ditto to the background score.

You might reach for Stolen just the way you'd reach for that pizza that has been lying in the refrigerator for a couple of days. But, eventually, just like with that pizza, you'll end up disappointed. And slightly dyspeptic.
Share. Save. Connect.
Tweet
STOLEN SNAPSHOT 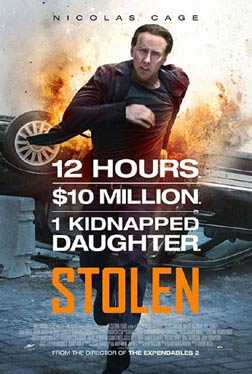 ADVERTISEMENT
This page was tagged for
Stolen english movie
Stolen reviews
release date
Nicolas Cage, Danny Huston
theatres list
Follow @fullhyderabad
Follow fullhyd.com on
About Hyderabad
The Hyderabad Community
Improve fullhyd.com
More
Our Other Local Guides
Our other sites
© Copyright 1999-2009 LRR Technologies (Hyderabad), Pvt Ltd. All rights reserved. fullhyd, fullhyderabad, Welcome To The Neighbourhood are trademarks of LRR Technologies (Hyderabad) Pvt Ltd. The textual, graphic, audio and audiovisual material in this site is protected by copyright law. You may not copy, distribute, or use this material except as necessary for your personal, non-commercial use. Any trademarks are the properties of their respective owners. More on Hyderabad, India. Jobs in Hyderabad.