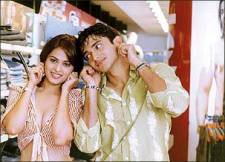 Rohit Murari / fullhyd.com
EDITOR RATING
5.0
Performances
Script
Music/Soundtrack
Visuals
NA
NA
NA
NA
Suggestions
Can watch again
NA
Good for kids
NA
Good for dates
NA
Wait to rent it
NA
In the times when the world was a nice place to live in and Bollywood believed in making good movies, Humdum would have been, well, a stupid movie. Times have changed, and how! And Humdum, in today's fast-paced world, would still be labeled a stupid movie. On the bright side (oh yes, a fullhyd.com reviewer can find a silver lining even when there is no cloud), if stupidity was a crime then jails would be where the non-stupid lived to protect themselves from the onslaught of the outside world.

Seriously, Humdum ain't as gut-wrenching a movie as you would expect it to be. It is much better than its more illustrious counterpart, For Love Or Money, which might not be saying much but, hey, it is the thought that counts, right? In any case, one more of the boy-meets-girl-teeny-hopper-romance won't kill you. It may cause indigestion, diarrhea, asphyxiation, or wheezing, and if any of these takes a toll on you then don't go around blaming the movie for it.

Newcomer Anjana plays Rrutu (and we thought only a certain individual has this fixation with names), a simple girl with simple ambitions of getting married and having as many as 25 dogs. Yes, we breathed a sigh of relief, too, when we learnt that she intends to adopt the dogs. She is engaged to Ashutosh, a guy who any woman in her senses would swoon all over.

That is until she meets a good-for-nothing-never-done-anything kind of bloke. He is Siddhant (Romit Raaj), our hero, and Rrutu's partner in the game Humdum - The Game Of Love And Money, broadcast on Zigma TV, and hosted by Tony (Ranveer Shorey) and Dia (Shammi). It must be said here that Ranvir Shorey has been a slight improvement from the days of Freaky Chakra, mostly because he does not have much to do but that is besides the point.

As the one-month long game show progresses, our protagonists go from hating each other to being completely head-over heels in love, much to the surprise of all those who have not seen a single movie in their lives. But, there is a catch. At the end of the game, they either have to choose love or ten crores. If they choose money, then they cannot see each other for twenty years. Really, we don't see why that is a tough choice to make. But then, we did not make the movie.

Like we have not said, Humdum is not a bad movie. The lead pair have some good chemistry between them. They can act, too, and that is always a good thing. The music may not stir the strongest of emotions in you but it is not bland either. Although, one does feel for Benjamin Geelani (Siddhant's father) who is reduced to being a decorative item.

So, Sunday afternoon? Got three hours to kill? Watch it.

ADVERTISEMENT
This page was tagged for
Hum Dum hindi movie
Hum Dum reviews
release date
Romit Raaj, Anjana
theatres list
Follow @fullhyderabad
Follow fullhyd.com on
About Hyderabad
The Hyderabad Community
Improve fullhyd.com
More
Our Other Local Guides
Our other sites
© Copyright 1999-2009 LRR Technologies (Hyderabad), Pvt Ltd. All rights reserved. fullhyd, fullhyderabad, Welcome To The Neighbourhood are trademarks of LRR Technologies (Hyderabad) Pvt Ltd. The textual, graphic, audio and audiovisual material in this site is protected by copyright law. You may not copy, distribute, or use this material except as necessary for your personal, non-commercial use. Any trademarks are the properties of their respective owners. More on Hyderabad, India. Jobs in Hyderabad.