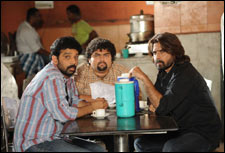 Deepa Garimella / fullhyd.com
EDITOR RATING
2.0
Performances
Script
Music/Soundtrack
Visuals
6.0
1.0
4.0
4.0
Suggestions
Can watch again
No
Good for kids
No
Good for dates
No
Wait for OTT
No
Never, ever play games with Khan Dada.

Money Money More Money, being marketed with Money's cult comic villain's face and name all over the place, is such a slipshod piece of work that it is astonishing to think that its makers actually imagined they could get away with cashing in on Money. The newspaper promos aren't very encouraging in the first place, but they don't possibly prepare you for the black hole of comedy - heck, of filmmaking - that is supposedly "Money 3".

All that the writers seem to have done is to have drawn up a broad sketch of a plot, filling it with potentially funny situations, hoping hard that the jokes will appear by themselves.

J D Chakravarthy's few movies as a director were never lousy (Homam and Siddham being his recent offerings), so the fact that he gets absolutely nothing right with Money 3 is quite a rude surprise.

JD, Brahmaji, Mukul Dev and Kavin Dave (the actor known by his presence in the Sprite commercials) play a bunch of friends whose livelihoods are being threatened by a road-widening project. They kidnap a rich girl for ransom, and hold her hostage in erstwhile kingpin Khan Dada's house. Khan, meanwhile, is no longer a stud. Not only is he well past his "prime", he also now debt-ridden thanks to the recession.

Khan Dada (Brahmanandam) and his family, too, are held captive, as are the visitors who keep trickling in for the former. The hostages include a pizza delivery boy (Venu Madhav), a saleswoman (Gajala), the maid's police inspector husband (Rajeev Kanakala) and a lender Tirumala Shetty (Jeeva) who Khan owes money to.

Like we said, JD gets nothing right with Money 3, and that means nothing. Not casting, not story, not comedy, not dialogues, not budget. In addition, the movie's lack of energy is appalling.

There are vacant, awkward pauses in several scenes, presumably to generate some kind of "natural" humour. Whatever it is meant to be doesn't work, and the rest of the film tries to milk laughs from banal premises.

Towards the end of the movie, there's a vet who tries to treat Tirumala Shetty, after the latter has had a heart attack, with a syringe used for cattle. Now that is the kind of slapstick mindlessness that could have worked - but in a context. Here, it's out of place, and mostly annoying, like the rest of the plot.

How annoying, exactly? Mukul Dev, who plays an impatient gangster exasperated with how fruitless the kidnap drama is turning out to be, wears a permanent grimace that tells you how much.

Apart from Mukul Dev's seasoned performance as a local goon, pretty much the only saving grace of the film is Venu Madhav, who is under-utilized but has a couple of delightful scenes.

Brahmanandam has been used merely for his expressions, which can get tiresome. Rama Prabha's comedy is pretty stale. Brahmaji has some good dialogues, though. JD doesn't give himself too much screen space, so it's hard to notice whether he's indifferent. Kavin Dave has been given some sad lines (and sadder dubbing).

There's one pub song, for those who care. The music director, evidently didn't. The background music doesn't even need credit. Sorry-looking visuals lend this film a look and feel that beg you to judge this one by its cover.

There's nothing in here for anyone who's looking for anything. Stay away.
Share. Save. Connect.
Tweet
MONEY MONEY MORE MONEY SNAPSHOT

ADVERTISEMENT
This page was tagged for
money money telugu movie
Money Money More Money telugu movie
Money Money More Money reviews
release date
J D Chakravarthy, Brahmaji
Follow @fullhyderabad
Follow fullhyd.com on
About Hyderabad
The Hyderabad Community
Improve fullhyd.com
More
Our Other Local Guides
Our other sites
© Copyright 1999-2009 LRR Technologies (Hyderabad), Pvt Ltd. All rights reserved. fullhyd, fullhyderabad, Welcome To The Neighbourhood are trademarks of LRR Technologies (Hyderabad) Pvt Ltd. The textual, graphic, audio and audiovisual material in this site is protected by copyright law. You may not copy, distribute, or use this material except as necessary for your personal, non-commercial use. Any trademarks are the properties of their respective owners. More on Hyderabad, India. Jobs in Hyderabad.