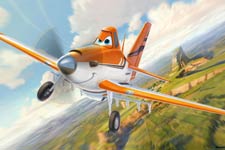 Nupur Barua / fullhyd.com
EDITOR RATING
4.0
Performances
Script
Music/Soundtrack
Visuals
6.0
3.0
4.0
6.0
Suggestions
Can watch again
No
Good for kids
Yes
Good for dates
Yes
Wait to rent it
No
A spin-off of its own franchise, Cars, Disney initially intended to release Planes on DVDs and Blu-Rays. They should have stuck to their original plan, because a theatrical release of a poor (albeit flying) cousin of the critically panned Cars, in 3D, no less, is not a smart move for a company trying to launch a new line of toys. Franchise movies obviously aim at going beyond plain entertainment.

Dusty (Dane Cook) is a crop duster plane. He has a staid life. However, he has a secret dream - one that is scorned by all those who know him - to become a racer plane.

He works on his manoeuvres, and with his fuel truck pal Chug (Brad Garrett), he manages to participate in the qualifying round of the Wings Across The World race. He does not fare too well, although his acrobatic moves impress a few. Now that he has tasted blood, so to speak, Dusty wants to pursue his ambition.

Skipper Riley (Stacy Keach), the naval plane who had refused to train Dusty earlier, tries to talk the latter out of this foolishness. When Dusty remains adamant, Skipper decides to train him after all.

Dusty then heads to New York, where he meets race planes El Chupacabra (Carlos Alazraqui) and Rochelle (Julia Louis-Dreyfus). He also falls in love with Ishani (Priyanka Chopra), who later teaches him how to overcome his fear of heights by showing him how to tackle the peaks of the Himalayas. Dusty finds an admirer in yet another race plane named Bulldog (John Cleese), whose life he saves at the cost of losing one of the races.

Dusty does manage to make an enemy of the hotshot Ripslinger (Roger Craig Smith), who has been the champion a few times. As these planes fly across the world, from one region to another, Dusty learns a few life lessons on relationships and hope, and about realising one's own potential.

Like all Disney movies, Planes, too, is a story of an ordinary being reaching extraordinary heights. It is a formula that has worked for almost all its films, but this particular screenplay is slightly jaded, as if the writers lost interest in the plot halfway through and wrote on auto mode.

Of course it is predictable, but it lacks the punch that these scripts usually have - when you know exactly what to expect, but you bite your nails anyway. This movie does not engage, and drags on for a bit.

The dialogues are clichéd and, again, conventional. The few moments that make you sit up and take notice are few and far between. Some of the characters show an iota of charm, but the cuteness factor overrides the spark.

The actors, from Dane Cook to John Cleese, are not really in the mood to add spirit to their lines. Maybe they did not like the script, or maybe they have done too many of these films to be really kicked about this one.

In contrast, Priyanka Chopra is desperately OTT, with or without the strange accent. Her enthusiasm for her role can bring a smile to your face, since you know that she has at least made an effort to justify an animated feature.

The animation and the production design are not exactly groundbreaking. The movie looks like an incomplete Pixar project, especially on 3D. And then there is the undeniable resemblance to Cars, as far as the colour palette is concerned.

Planes is a movie for children who want to see 3D planes on a weekend. Do not expect emotional reactions from yourself, and bear with the length (less than two hours), for the sake of the kids. And buy some of the merchandise just to make up for the disappointment that Disney imposes on you with their latest offering.
Share. Save. Connect.
Tweet
PLANES (3D) SNAPSHOT 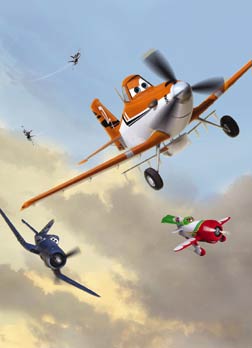 ADVERTISEMENT
This page was tagged for
Planes (3D) english movie
Planes (3D) reviews
release date
Dane Cook, Stacy Keach
theatres list
Follow @fullhyderabad
Follow fullhyd.com on
About Hyderabad
The Hyderabad Community
Improve fullhyd.com
More
Our Other Local Guides
Our other sites
© Copyright 1999-2009 LRR Technologies (Hyderabad), Pvt Ltd. All rights reserved. fullhyd, fullhyderabad, Welcome To The Neighbourhood are trademarks of LRR Technologies (Hyderabad) Pvt Ltd. The textual, graphic, audio and audiovisual material in this site is protected by copyright law. You may not copy, distribute, or use this material except as necessary for your personal, non-commercial use. Any trademarks are the properties of their respective owners. More on Hyderabad, India. Jobs in Hyderabad.