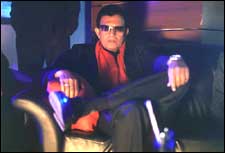 Rohit Murari / fullhyd.com
EDITOR RATING
6.0
Performances
Script
Music/Soundtrack
Visuals
NA
NA
NA
NA
Suggestions
Can watch again
NA
Good for kids
NA
Good for dates
NA
Wait to rent it
NA
[Slim Shady mode begins] Guess who's back. Back again. Mithun da's back. Back again. [Slim Shady mode ends] Boy, has he lost none of his touch! In fact, if the audience response is anything to go by then the hiatus has only endeared the man further.

Mithun da plays Baba Sikander, the baddest man Bollywood has ever known. He runs from Venice the most-powerful organized crime syndicate in India. So when a certain Kantilal Shah refuses to pay him Rs. 20 crores, Baba promptly exterminates him. Only, he does not take into account that Shah's adopted son, Karan (Rahul Khanna), is the hero of the movie.

That he would have gotten away with. But, the director just did not play fair. As it is, the villain has to fire one thousand nine hundred and fifty seven bullets before one of them grazes the hero's arm. Did Vikram Bhatt have to bring in two more by the names of Arjun Srivastava (Arjun Rampal) and Abhimanyu (John Abraham)? And no, the buck did not stop there. No, no, no, no, no, no!

Baba also has Priya (Amisha "bullet-proof" Patel) and Sonia (Lara "oomph" Dutta) to contend with. Between them they have enough girl-power "stacked" on their persons to leave any man grappling, and yet defy all known laws of gravity. Top that with their wielding a gun that is as much in accordance with their persona as Shah Rukh Khan in a thong.

Like any self-respecting bad guy, Baba knows when his time has come. In any case, it is hard to ignore a sign as ominous as the Germans understanding English or the French co-operating with anyone non-French. Or Priya and Sonia wearing a raincoat in heavy downpour. Clearly, someone wasn't thinking. Here was an opportunity gone begging.

Without a shadow of doubt, Mithun da is the best thing to have happened to the movie. Not for no reason is he called the poor man's Amitabh Bachchan. Chunky Pandey (as Baba's brother, Salim) makes an impressive return to celluloid. But, the absolute scene-stealer (and we are only considering people here, not their endowments) has to be Arjun Rampal. His looks are among the most over-rated, and acting skills among the most under-rated in the industry.

Being a Bhatt(i) product, it is a very slickly produced movie. Two aspects, though, need special mentioning. The cinematography, with the alpine heights forming a majestic backdrop, and the action, despite being a tad implausible, will take your breath away. Surprisingly, the script ain't too bad for an action movie. The background score is just right.

What happened to fullHYD's legendary standards?! Elaan is pure unadulterated crap! And the action is a pot-pourri of sad rip-offs from Matrix and MI-2... hardly breathtaking!

ADVERTISEMENT
This page was tagged for
Elaan hindi movie
Elaan reviews
release date
Mithun Chakraborti, Arjun Rampal
theatres list
Follow @fullhyderabad
Follow fullhyd.com on
About Hyderabad
The Hyderabad Community
Improve fullhyd.com
More
Our Other Local Guides
Our other sites
© Copyright 1999-2009 LRR Technologies (Hyderabad), Pvt Ltd. All rights reserved. fullhyd, fullhyderabad, Welcome To The Neighbourhood are trademarks of LRR Technologies (Hyderabad) Pvt Ltd. The textual, graphic, audio and audiovisual material in this site is protected by copyright law. You may not copy, distribute, or use this material except as necessary for your personal, non-commercial use. Any trademarks are the properties of their respective owners. More on Hyderabad, India. Jobs in Hyderabad.