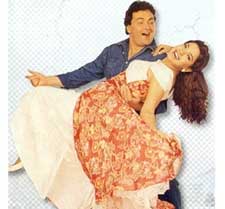 Pratima Agnihotri / fullhyd.com
EDITOR RATING
5.0
Performances
Script
Music/Soundtrack
Visuals
NA
NA
NA
NA
Suggestions
Can watch again
NA
Good for kids
NA
Good for dates
NA
Wait to rent it
NA
If you're wondering how you missed out the making of this film considering the hi-profile star cast and director, well, it's been in the making for so long, it's difficult to keep it at the top of your consciousness. There's so much more happening in the world. But when it finally releases, you go with anticipation wondering what it could be that needed over 5 years to create. What is this about?

Rajiv Sinha (Rishi Kapoor) is a struggling advocate. Into his life walks Seema (Juhi Chawla), quite by chance. But it turns out to be a lucky chance. Thence begins a love story, which is truer than the traditional Shiri-Farhad sagas.

Into this heaven of bliss gatecrashes Rajiv's childhood buddy, Amar (Anil Kapoor), now a multi-millionaire owner of Apollo Advertising. He flips for Seema's charm and thinks that like every other girl, she, too, would be a coin that can be bartered. The expert at such "karobar"(business deals) is dead wrong this time. As soon as Seema gets to know his real intention, she avoids him like the hell itself.

Now she turns into a challenge for the Don Juan. His experience tells him that every woman is a buy. He takes it up as a challenge to seduce her, and at any cost. He starts to interfere in the lives of the lovebirds in every possible way, but nothing produces the desired effect. At last, it's plain luck that favours him. Rajiv meets with an accident and Seema is ready to sell herself to get the five lakhs necessary for his treatment. Her love for Rajiv however moves Amar, and he helps her. Which, in turn, Rajiv misunderstands, especially because her alibi saves Amar from a trumped-up charge.

So what happens to their destinies? How does Rajiv, the bitter and egoistic drunk of a public prosecutor that he has become, understand the truth? Does Amar change for the better? Watch Rakesh Roshan's Karobar to find the answers, which evolve through a flashback and the mandatory courtroom drama.

The film, an adaptation of the famous, or, rather, notorious, Indecent Proposal, is - despite the tortuous turns so essential to a Hindi film - quite a credible presentation of the moral dilemmas involved. It moreover has an old world flavor to it. One can easily date its inception given the very many echoes of the Anjaam theme that the Madhuri/Juhi/Shahrukh brigade had popularized. Similarly, there is an undeniable attempt to re-create the Juhi-Anil chemistry, and to revive the youthful aura of the intense Rishi of his early films.

Yet, at times such an attempt backfires, as all the lead stars have aged beyond belief and it is painful to see them frolicking like silly seventeens. Nevertheless, all the three, even the usually frivolous and bubbly Juhi, try to put in creditable performances. Anil Kapoor's portrayal of the amused and cool villain deserves a special mention. He is successful in making a vile villain a credible study in amoral evil.

But very little else is worthy of writing home about. The songs are not what you'd hum walking out of the theater, and neither are the technical aspects anything special. But for a solitary lyric, Javed's magic too is missing. In brief, an ethical dilemma worth a watch for old times sake!
Share. Save. Connect.
Tweet
KAROBAAR SNAPSHOT

ADVERTISEMENT
This page was tagged for
anil Kapoor Juhi Chawla karobaar Hindi movie HD
www india movi karobaar com
Karobaar hindi movie
Karobaar reviews
release date
Follow @fullhyderabad
Follow fullhyd.com on
About Hyderabad
The Hyderabad Community
Improve fullhyd.com
More
Our Other Local Guides
Our other sites
© Copyright 1999-2009 LRR Technologies (Hyderabad), Pvt Ltd. All rights reserved. fullhyd, fullhyderabad, Welcome To The Neighbourhood are trademarks of LRR Technologies (Hyderabad) Pvt Ltd. The textual, graphic, audio and audiovisual material in this site is protected by copyright law. You may not copy, distribute, or use this material except as necessary for your personal, non-commercial use. Any trademarks are the properties of their respective owners. More on Hyderabad, India. Jobs in Hyderabad.