Samrat Sharma / fullhyd.com
EDITOR RATING
10
Performances
Script
Music/Soundtrack
Visuals
9.0
10.0
9.0
10.0
Suggestions
Can watch again
Yes
Good for kids
Yes
Good for dates
Yes
Wait for OTT
No
It's the 3D re-release of one of the best Pixar films ever, and certainly one of the finest animated films of all time. The question you should be asking yourself is, "why haven't I seen it yet"? Pixar was in incredibly good form technically, when Finding Nemo was first released - playing with underwater lights and shadows to create one of the most visually timeless animated movies. It has certainly aged magnificently - some of the newer technical advancements are missing conspicuously, but it feels wonderful to watch.

It's mostly because it isn't the technology but the high standard of storytelling that was prevalent in all Pixar movies at the time. It has humour and heart in equal measures, exploring emotional depths like a seasoned artistic scuba diver.

After an opening that leaves Marlin the clownfish a nervous single father, we see this clownfish endure not being funny or popular just to be a good father. Necessity gives him courage when, one day, his son Nemo is stolen right in front of him.

The odyssey he takes with new friend Dory is full of wonders and eye-opening emotional realisations, juggled lovingly by directors Andrew Stanton and Lee Unkrich. Nemo meanwhile, makes friends in the aquarium he finds himself stuck in, where the talents of some of the best voice actors bring to life a circus of oddball fish where the young boy learns pathos and respect.

It's a road movie meets coming-of-age film all wrapped in an emotional core that will be resonant for all parents. This is the most difficult of all kinds of movies to make, but Stanton and Unkrich, with the help of their finned friends, make it seem easy, and wrap it in humour and adventure effortlessly.

Finding Nemo is one of the finest films ever made, damn the animated tag, and should you feel the need to spend a magical time with your children this Sunday afternoon, this is possibly the best you could do.

The re-release is technically the same film, but this time retrofitted in 3D. It doesn't show its age one bit, and the 3D is elegant and tasteful. The 3D is not necessary for our enjoyment, and doesn't make the the movie better, but gives it understated flavour; the subtle and graceful way it has been employed here keeps it from being a cash grab.

It's highly recommended you watch Finding Nemo 3D, no matter what age or film-watching preferences you have. This may be a slow autumn for cinema, but with all the muscle-bound explosive action in theatres right now, you could do with a dip in the sea.
Share. Save. Connect.
Tweet
FINDING NEMO (3D) SNAPSHOT 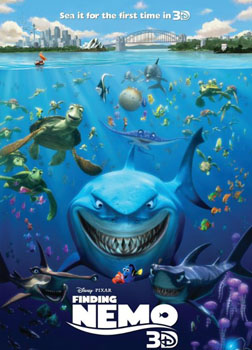 ADVERTISEMENT
This page was tagged for
Finding Nemo (3D) english movie
Finding Nemo (3D) reviews
release date
Albert Brooks, Ellen DeGeneres
theatres list
Follow @fullhyderabad
Follow fullhyd.com on
About Hyderabad
The Hyderabad Community
Improve fullhyd.com
More
Our Other Local Guides
Our other sites
© Copyright 1999-2009 LRR Technologies (Hyderabad), Pvt Ltd. All rights reserved. fullhyd, fullhyderabad, Welcome To The Neighbourhood are trademarks of LRR Technologies (Hyderabad) Pvt Ltd. The textual, graphic, audio and audiovisual material in this site is protected by copyright law. You may not copy, distribute, or use this material except as necessary for your personal, non-commercial use. Any trademarks are the properties of their respective owners. More on Hyderabad, India. Jobs in Hyderabad.