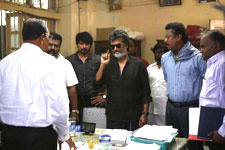 T J Reddy / fullhyd.com
EDITOR RATING
5.5
Performances
Script
Music/Soundtrack
Visuals
7.0
5.0
6.0
8.0
Suggestions
Can watch again
No
Good for kids
No
Good for dates
No
Wait for OTT
No
If a person's legacy is defined by the impact he/she left on the people of the world, how many of people have ideologies worth holding on to? This is but one of the questions director Pa Ranjith asks in his latest venture, Kaala.

Set in Dharavi, the largest slum India has to offer, Kaala, the film, follows Karikaalan (Rajnikanth) and his crew as they attempt to stop a gentrification project that threatens to rob the people of Dharavi of their homes and livelihoods. While the war for Dharavi's soul rages in the foreground, the battle within is fought between the titular character and Haridev "Hari Daada" Abhiyankar (Nana Patekar) - two men (that share a past) whose ideologies and personalities are meant to make an audience question their (the latter's) understanding of good and evil.

These heady ideas come from the mind of Pa Ranjith, a man who specialises in politically charged storytelling. And a man who made a film about a painting on a wall engrossing. Ranjith repurposes Ravan (Mani Ratnam's take on the Ramayana) to suit his modus operandi. His story is not one of love but instead one that asks the audience to firmly side with The Man In Black (in more ways than one) and asks us to empathize with the mass of humanity he is responsible for. The men clad in all-white are quite clearly framed as the oppressors - is that racial and caste-based subtext we smell? It sure is.

A story of this magnitude, that encompasses an ecosystem of characters, needs time. The film, however, is both strapped for time and overly long. When working with the cinematic medium, a filmmaker's first constraint is runtime. When working with an actor of Rajnikanth's stature in addition, the constraint is more pronounced as a filmmaker with a unique voice needs to cram the doubleheader of his many socio-political messages and oodles of fan service the audience craves. What we as the audience get in return is a film that subverts expectations, sticks to clichés and is not as open to ideas as it thinks it is. Unlike the Ramayana that it appears to attempt to reimagine, Kaala works only when viewed through a certain prism.

Could this lack of nuance be attributed to the fact that "the 99%" are responsible for either the success or the failure of a movie? Yes. But what a full 100% of the audience can agree to with no qualms whatsoever is that Kaala and Kabali before it have been Rajnikanth's finest hours as an actor in a very long time. Like Kabali, this film too does not rely on Rajni the action star but on Rajni the actor. The actor the masses fell in love with while watching films such as Mullum Malarum, Katha Sangama, Thalapathy and a bevy of films helmed by K Balachander.

Watching Rajni play his age, show his limitations (both physically and psychologically), genuinely experience pain and loss, exercise his comedic muscle to great effect and exude his unmatched charisma is a filmgoer's delight. The man's performance in Kaala helps one remember Rajni is more than just punches and punch-lines.

While Karikaalan is the perfect amalgamation of character and actor, everyone else in the film who isn't played by Nana Patekar, Samuthirakani and Eshwari Rao (an endless well of charm and energy highlighting Ranjith's handle on writing smart female characters) leaves a lot to be desired in the character department. Weak writing and lack of clear arcs cripple the effect Huma Qureshi's Zareena and Manikandan's Lenin and many a supporting character have on the narrative at large even though the film has grand ideas of all of them as illustrated in the final sequence.

While the narrative falters from time to time owing to some pacing issues, Santosh Narayanan's score is busy at work trying to keep the audience interested. The themes designed for Kaala and Hari Daada are apt separately, and meld together in near mesmeric fashion. However, the songs and the overuse of rap add to the film's meandering pace and lack of lasting effect, respectively.

Akin to the music masking narrative deficiencies, the movie's visual aesthetic endeavours to hide almost every single issue that threatens to drag the film down with spellbindingly composed shots and use of colour. The movie is near faultless in its set design, blocking, camerawork and more, but runs out of steam once CGI is added to the mix. When the final line of defence is broken, and a viewer's suspension of disbelief is shattered, the movie's shortcomings have no place to hide. And that is Kaala in a nutshell. Clever ideas, smooth filmmaking and some entrancing acting covering up for a film whose flaws are a result of its reach far exceeding its grasp.

At a juncture in the film, Kaala says, "Any young whipper-snapper that reads a couple of books thinks he can be a revolutionary without having a genuine understanding of what the people want." We agree, but we sat through the film wanting him to show us a better way of doing things, and suffices to say we were disappointed. Stopping evil is only the beginning. Making corrections to one's own conditions and striving for a better life is the goal. Somewhere between A and B, the film got hit by that God-forsaken bus. The accident wasn't fatal, but it does leave a lot of marks on the champ. And once the veneer of invincibility is shattered, does anyone take a larger than life character at face value?
Share. Save. Connect.
Tweet
KAALA SNAPSHOT 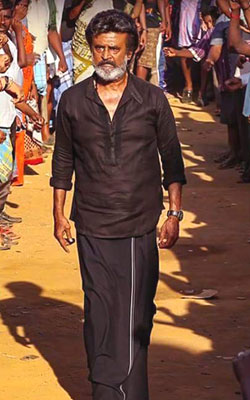 See Kaala full details
KAALA USER REVIEWS
1 - 1 OF 1 COMMENTS
POSITIVE  |  NEGATIVE |  NEWEST  |  OLDEST  |  MOST HELPFUL  |  LEAST HELPFUL
Veturi Sarma on 9th Jun 2018, 8:41am | Permalink
And once the veneer of invincibility is shattered, does anyone take a larger than life character at face value? ///

ADVERTISEMENT
This page was tagged for
kala telugu movie review
kaala telugu full movie
kaala full telugu movie
Kaala telugu movie
Kaala reviews
Follow @fullhyderabad
Follow fullhyd.com on
About Hyderabad
The Hyderabad Community
Improve fullhyd.com
More
Our Other Local Guides
Our other sites
© Copyright 1999-2009 LRR Technologies (Hyderabad), Pvt Ltd. All rights reserved. fullhyd, fullhyderabad, Welcome To The Neighbourhood are trademarks of LRR Technologies (Hyderabad) Pvt Ltd. The textual, graphic, audio and audiovisual material in this site is protected by copyright law. You may not copy, distribute, or use this material except as necessary for your personal, non-commercial use. Any trademarks are the properties of their respective owners. More on Hyderabad, India. Jobs in Hyderabad.