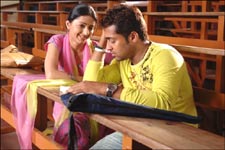 Ravi Mundoli / fullhyd.com
EDITOR RATING
3.0
Performances
Script
Music/Soundtrack
Visuals
NA
NA
NA
NA
Suggestions
Can watch again
NA
Good for kids
NA
Good for dates
NA
Wait for OTT
NA
A long time ago, in a galaxy far, far, away, someone came up with the archetype of the long suffering, self-sacrificing bharatiya naari. A host of epic poets, authors, playwrights and (most recently) moviemakers latched onto this template and churned out works that contained one or more women cast in that mold. This was lapped up by gushing fans and the genre prospered and flourished.

Sometime in the 20th century, people sat up and said, “Hmm… Maybe the bharatiya naari isn’t what we suspected all along…” This lead to unprecedented innovation in the arts, and more nuanced depictions started emerging. The archetype had had its day in the sun, and had been duly consigned to the back shelf of history.

Or so we thought. Something has survived (and we’re not talking velociraptors). And ever so often, it comes back to haunt us in places where we least expected.

Apologies for the melodrama, but it’s all the film’s fault. Perhaps it’s time to reveal the plot, such as it is. Vaishnavi (Jyothika), a feisty village belle, is married off to Gowtham (Suriya). She’s not exactly opposed to the idea, but has expectations of love and passion from her marriage, that she suspects cannot be fulfilled in an arranged marriage. It doesn’t help that Gowtham is the taciturn type, and opens his mouth only to polish off a bottle of beer as he drives to the wedding.

Flash forward 6 years. They have a daughter Aishwarya, and now live in Mumbai. Vaishnavi works in an office, it doesn’t matter what her job is (see comments above – viz. bhaaratiya naari). Gowtham is a car mechanic and works at a large, well-known, automobile manufacturer. He, we’re given to understand, is some sort of whiz kid, who can apparently solve complex internal combustion engine problems in his head.

The marriage seems to have worked out well, despite our misgivings, and despite the fact that the drinking habit hasn’t exactly abated. All is domestic bliss, until Gowtham leaves the country on car business. One day, Vaishnavi comes across a diary Gowtham used to keep in his gung ho college days, and learns of his dark college secret, Aishwarya (Bhoomika). Perhaps not such a dark secret, given that it is Bhoomika, but that is all irrelevant.

What is relevant (painfully, if you’re in the theatre) is that the movie starts to unravel from this point, and at its nadir reaches scarcely believable levels of melodrama. Perhaps in an older, gentler, age it would’ve drawn a few sighs and tears from a supportive audience, but now all it can bring forth are waves of not so polite tittering.

The saving grace of course, is the acting. Suriya and Jyothika bring what must be some of the real life chemistry between them onto screen, and do a good job of portraying the couple, up to a point. After that, the script takes over, and there’s not a whole lot they can do to salvage the movie. Bhoomika is decent as the timid college girl type.

There’s a parallel comedy track involving Vadivelu & co. which is simply annoyingly distracting. A R Rahman seems to have composed the music in his sleep, and the dubbing (from Tamil) leaves something to be desired.

Ultimately however, none of this is responsible for the disappointment that Nuvvu Nenu Prema is. The blame must lie squarely with the story. If only, as Vaishnavi opened that fateful diary, 37 little green men holding banjos with tentacles had materialized in the room singing Himesh Reshammiya songs, we suspect that Nuvvu Nenu Prema would’ve taken off in an entirely more interesting direction. Of course, it would’ve had to be renamed “Nuvvu Nenu 37 Martianlu” or something, but think of the possibilities…
Share. Save. Connect.
Tweet
NUVVU NENU PREMA SNAPSHOT

ADVERTISEMENT
This page was tagged for
Nuvvu nenu prema movie download
Nuvvu nenu prema full hd movie free download
nuvvu nenu prema movie download
index of Nuvvu Nenu Prema download
nuvvu nenu prema movie review
Follow @fullhyderabad
Follow fullhyd.com on
About Hyderabad
The Hyderabad Community
Improve fullhyd.com
More
Our Other Local Guides
Our other sites
© Copyright 1999-2009 LRR Technologies (Hyderabad), Pvt Ltd. All rights reserved. fullhyd, fullhyderabad, Welcome To The Neighbourhood are trademarks of LRR Technologies (Hyderabad) Pvt Ltd. The textual, graphic, audio and audiovisual material in this site is protected by copyright law. You may not copy, distribute, or use this material except as necessary for your personal, non-commercial use. Any trademarks are the properties of their respective owners. More on Hyderabad, India. Jobs in Hyderabad.