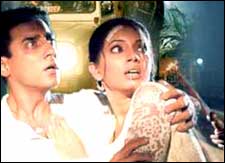 Rohit Murari / fullhyd.com
EDITOR RATING
3.0
Performances
Script
Music/Soundtrack
Visuals
NA
NA
NA
NA
Suggestions
Can watch again
NA
Good for kids
NA
Good for dates
NA
Wait for OTT
NA
The posters of Chand Bujh Gaya scream in 10 inch banner headlines that the movie has been released by the order of the Honorable Bombay High Court. No reason why it should have not been. Of course, when we say that we are implying that sad acting is not reason enough for a ban. Damn!

For the uninitiated, the movie is about Gujarat riots. It has made none too subtle references to a certain individual who was at the helm of affairs at the time. It tells us in as many words that the riots were orchestrated purely for political gains. And this is where it scores a few points - for its blatant honesty.

Rahul (Faisal Khan, last seen in Basti) is the hero of the movie. We know this because he is the only one wearing a suit, a very badly tailored one at that. Otherwise, we are as blank about him as a freshly formatted hard disk. Savi (Sanam) is his heroine. We know this because she is the only one breaking into a song with him. Also she is the best thing to have happened to the movie, which means as much as fresh water does to an oceanic jellyfish.

Rahul also has a best friend, Meghna (Aliza of Mahal fame - man, to be able to recall that!). We know this because they have very stupid goodnight, goodbye and good-riddance rituals that involve different ways of touching different parts of each others' anatomies. Yeah, yeah, yeah, yeah, yeah. Meghna loves Rahul but sacrifices her love when she learns how much Savi and Rahul love each other, and then she decides to help them in their union, and other such blah blah blah.

So, when does it finally get to Godhra? Good question. We thought of it too, until the movie just happened to get there inexplicably. No explanations offered, which was not a bad thing. Hey, we will take anything that keeps Faisal Khan off the screen. What follows is a saga of lovers torn by strife, partly of communal riots but mostly of apathetic dialog-delivery.

The movie takes a bold subject head on. Nothing wrong with that. But it does it the way most low-budget B-grade movies do seduction sequences - a patch here and a patch there to lure the crowds in. Sanam may not have much acting prowess but at least she looks good. The same cannot be said of Aliza or Faisal Khan. Music is your typical B-grade affair, and the screenplay not even that.

There is no clear, or even unclear, objective behind making the movie, save for generating the controversy that a subject like this is capable of.
Share. Save. Connect.
Tweet
CHAND BUJH GAYA SNAPSHOT

ADVERTISEMENT
This page was tagged for
Chand Bujh Gaya hindi movie
Chand Bujh Gaya reviews
release date
Faisal Khan, Aliza
theatres list
Follow @fullhyderabad
Follow fullhyd.com on
About Hyderabad
The Hyderabad Community
Improve fullhyd.com
More
Our Other Local Guides
Our other sites
© Copyright 1999-2009 LRR Technologies (Hyderabad), Pvt Ltd. All rights reserved. fullhyd, fullhyderabad, Welcome To The Neighbourhood are trademarks of LRR Technologies (Hyderabad) Pvt Ltd. The textual, graphic, audio and audiovisual material in this site is protected by copyright law. You may not copy, distribute, or use this material except as necessary for your personal, non-commercial use. Any trademarks are the properties of their respective owners. More on Hyderabad, India. Jobs in Hyderabad.