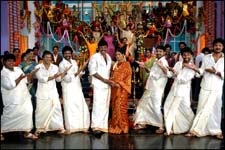 Deepa Garimella / fullhyd.com
EDITOR RATING
3.0
Performances
Script
Music/Soundtrack
Visuals
7.0
2.0
6.0
5.0
Suggestions
Can watch again
No
Good for kids
No
Good for dates
No
Wait for OTT
Yes
There's little you can do or say about this genre of films, because it is so obstinately mediocre that there's no way out. Maa Annayya Bangaram has a script that is stuck in its own formative years, and its immature treatment makes it hard to treat it otherwise.

Sivaji (Rajasekhar) is a self-made man who has grown up bringing up his battalion of younger brothers, after his parents die when they all were young. His uncle (Jayaprakash Reddy) wants to get him married, and gets him hitched to a girl who the whole family approves of, Manju (Kamalinee Mukherjee).

Manju's sister (Jhansi) is a domineering control freak who, thanks to her own marital issues, thinks a small family is the only way to be happy, and declares that she can't get her sister married into any home that consists of a gaggle of relatives. So Sivaji and his herd hide their familial ties from Manju and her sister, pretending they're cousins who'll go away after their wedding.

What follows are pathetic situations of the cowering set of siblings painfully hiding their love for their elder brother. In the process, Manju also gets taught about the many pluses of having people around and living in a joint family.

The story is replete with clichés from every B-grade TV serial you can think of, plus their points of birth in the '80s. The film has ill-conceptualized situations, especially with the whole bit about the brothers being all holier-than-thou about their fraternal bonding. This is the kind of plot where people get into problems that seem to have easy ways out.

Still, if you insist, the flick has some comedy at times, that might tickle you if you're sufficiently tuned in to its intelligence level. Some of the sentiment won't hurt, either, in case simplistic cinema is what you're looking for.

While Rajasekhar does Maa Annayya Bangaram what he does every time, Kamalinee is getting to be a revelation as far as her choice of films is concerned. Every frame makes you aware of how far she's really removed from this league of movies, and you're constantly reminded of the few brilliant flicks she lent substance to.

Probably the only actor who lends dignity to the state of affairs is Jayaprakash Reddy, who manages to bring in nuances to the basic-level comedy. Jhansi is good as well.

The visuals are nothing that you'd want to speak much about, and the songs are good for the washroom breaks.

Skip this one unless you're a die-hard fan, in which case you must re-adjust your priorities.
Share. Save. Connect.
Tweet
MAA ANNAYYA BANGARAM SNAPSHOT

ADVERTISEMENT
This page was tagged for
maa annayya bangaram ringtons
Maa Annayya Bangaram telugu movie
Maa Annayya Bangaram reviews
release date
Dr. Rajasekhar, Kamalinee Mukherjee
Follow @fullhyderabad
Follow fullhyd.com on
About Hyderabad
The Hyderabad Community
Improve fullhyd.com
More
Our Other Local Guides
Our other sites
© Copyright 1999-2009 LRR Technologies (Hyderabad), Pvt Ltd. All rights reserved. fullhyd, fullhyderabad, Welcome To The Neighbourhood are trademarks of LRR Technologies (Hyderabad) Pvt Ltd. The textual, graphic, audio and audiovisual material in this site is protected by copyright law. You may not copy, distribute, or use this material except as necessary for your personal, non-commercial use. Any trademarks are the properties of their respective owners. More on Hyderabad, India. Jobs in Hyderabad.