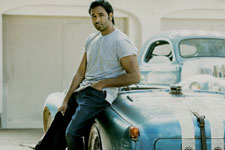 Ajay Kumar R / fullhyd.com
EDITOR RATING
3.5
Performances
Script
Music/Soundtrack
Visuals
5.0
3.0
6.0
5.0
Suggestions
Can watch again
No
Good for kids
No
Good for dates
No
Wait to rent it
No
Maybe he is, but we certainly haven't been that lucky, because instead of watching hundreds of troops marching in unison at Parade Grounds, we chose to sit through this infuriating and annoying Tollywood "comedy". The movie also lucked out in getting a UA certificate, which has resulted in a whole mass of teenage crowds - it certainly isn't for all age groups. Or actually, for anyone.

So Lucky (Manchu Vishnu) is a walking-talking omen to people around him, and brings bad luck to all he interacts with including his family. Even his father despises him and associates him with every misfortune and loss that occurs when Lucky is around. Eventually his girlfriend Padma (Hansika Motwani) - after he fails to heed her advice - too brands him irresponsible and negative, and leaves him. A series of misadventures later, a depressed Lucky gets entangled with a mafia kingpin (M V V Satyanarayana) and his Rs. 25 crores of stolen cash. Then, with the help of the cops, he takes on the don in order to prove that he (Lucky), too, can bring good luck to this world.

Right from the beginning Luckunnodu is a series of badly scripted comic sequences used as diversions from the gaping holes in the unintelligible plot. Firstly, the film has Lucky narrating the baggage of unlucky events he has carried throughout his life, and how his father considered him less than human due to that, to a complete stranger (and a robber). Secondly, you can never empathize with him because Vishnu's emoting is unpolished and lacks substance, and his expressions do not sync with the misfortunes he narrates or the depression he feels due to his father's disapproval. If giving him unsynchronized expressions to make you laugh was the whole point of the movie, it is lost on you.

Then, the film starts turning creepy as Luckunnodu, like many other Telugu films, tells its UA audiences that stalking is how you impress a woman. Lucky randomly walks up to the female lead and starts coaxing her into marrying him (and no logic is offered to justify the insanity). And she falls for him soon despite the harassment - Tollywood female characters apparently dig stalkers. The crude "comedy" in that harrowing 20-minute sequence adds to the repulsiveness of the already repugnant narrative.

Next, the Hyderabad police, which has won several medals in the real world, in this movie lets an unemployed stalker take over the task of capturing an international criminal (the don) just to prove his mettle to his spiteful and superstitious father.

Vishnu is trying hard to make a mark - and all we can do is wish him, um, luck. Hansika's acting experience doesn't salvage this one. Veteran actor Jayaprakash who plays Lucky's father is worth mentioning - you might find yourself taking sadistic pleasure as his character pokes holes in this spoilt child's heart. Other cast members including the comedians, with the exception of perhaps Raghu Babu and Prabhas Seenu, don't inspire any laughter. 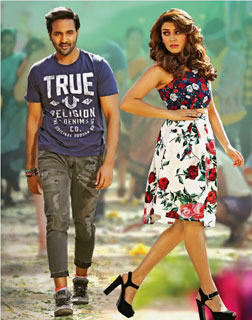 ADVERTISEMENT
This page was tagged for
luckunnodu Dawa Piya in Barkatpura main Piya Ke
Luckunnodu telugu movie
Luckunnodu reviews
release date
Manchu Vishnu, Hansika Motwani
Follow @fullhyderabad
Follow fullhyd.com on
About Hyderabad
The Hyderabad Community
Improve fullhyd.com
More
Our Other Local Guides
Our other sites
© Copyright 1999-2009 LRR Technologies (Hyderabad), Pvt Ltd. All rights reserved. fullhyd, fullhyderabad, Welcome To The Neighbourhood are trademarks of LRR Technologies (Hyderabad) Pvt Ltd. The textual, graphic, audio and audiovisual material in this site is protected by copyright law. You may not copy, distribute, or use this material except as necessary for your personal, non-commercial use. Any trademarks are the properties of their respective owners. More on Hyderabad, India. Jobs in Hyderabad.