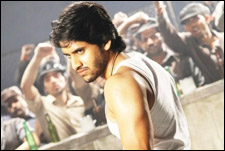 Deepa Garimella / fullhyd.com
EDITOR RATING
3.0
Performances
Script
Music/Soundtrack
Visuals
7.0
2.0
6.0
8.0
Suggestions
Can watch again
No
Good for kids
No
Good for dates
No
Wait for OTT
Yes
And that is how you know Naga Chaitanya has really arrived.

With at least 2 of his 3 earlier movies having been declared super-hits, this kid is no longer someone you might otherwise suspect of being able to buy his way to success. His achievements have spawned a confidence that commands a certain amount of marvel at how tables have turned quite quickly for him, making him someone incapable of getting hurt by a film that never should have been made in the first place.

Dhada's non-existent plot is set in New York, and Ajay Bhuyan prefers to let his action director, his cinematographer, the dance choreographer, and the actors' stylists do all the talking while the others strut around.

Naga Chaitanya plays Vishwa, who is smitten by Ria (Kajal Aggarwal), whose billionaire father (Mukesh Rishi) wants her to marry a trillionaire who was on the cover of Forbes. Meanwhile, when Vishwa rescued a girl from some tough guys, he ended up pissing off RD (Rahul Dev), a big-time supplier of girls all over the world. Also in the picture is Vishwa's doting elder brother (Sriram).

Dhada, yes, is a bad movie, but thankfully takes away nothing from the points its talented lead actors have racked up so far. Not even as Chaitanya plays a hero who can beat to pulp in 20 seconds (we didn't make that up - Dhada did) the brawniest of goons. Not even as Kajal Aggawal plays a morose filthy-rich kid with parent issues and in the other 98% of her role dances sultrily to generic-sounding songs.

Nope, not even as the two do a "how cool and romantic are we" love story with a bike ride in New York City, a romantically lit-up Brooklyn Bridge, and midnight trysts in the heroine's cellar.

While Chaitanya exudes coolth and executes his role with enviable self-assurance, Kajal's only feat in this flick is to have had experimented with a new look. You can't even make out if the two have any chemistry - their romance only consists of about 4,525 songs that keep spurting up for no reason.

For Kajal, her role is a departure from all the chirpy girl-next-door roles she's done so far, with her extra dose of glamour and her oversexed look in the songs.

It's nice to see Sriram back on screen, and with quite a bit of a role, although Dhada isn't exactly a movie he'd want to remember. Rahul Dev, playing a chilling villain, seems to get better with age, but his "naa kaalu ela poyindo telusa" stories lose the fizz soon.

The fights and chases are too many, and the amount of gore says you should leave the kids at home.

The comedy track is a sorry, sorry waste of Brahmanandam, Venu Madhav, Dharmavarapu and Ali. Brahmanandam's repeated Snickers act does nothing for the flick except elicit groans.

Great visuals make this a project that the cinematographer can proudly display on his resume. There are many slow-motion shots, and some creatively made sequences (like the one in the ancient-looking tavern that sells, among other Telugu delicacies, "Amalapuram pootharekulu"), but overall, a slick product.

With the exception of one good tune, Devi Sri Prasad's music is a set of dance numbers that all sound the same. Also, loud background music accompanies every scene in the flick, making it hard to sit through.

ADVERTISEMENT
This page was tagged for
Dhada telugu movie
Dhada reviews
release date
Naga Chaitanya, Kajal
theatres list
Follow @fullhyderabad
Follow fullhyd.com on
About Hyderabad
The Hyderabad Community
Improve fullhyd.com
More
Our Other Local Guides
Our other sites
© Copyright 1999-2009 LRR Technologies (Hyderabad), Pvt Ltd. All rights reserved. fullhyd, fullhyderabad, Welcome To The Neighbourhood are trademarks of LRR Technologies (Hyderabad) Pvt Ltd. The textual, graphic, audio and audiovisual material in this site is protected by copyright law. You may not copy, distribute, or use this material except as necessary for your personal, non-commercial use. Any trademarks are the properties of their respective owners. More on Hyderabad, India. Jobs in Hyderabad.