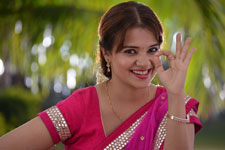 Ravi Kandala / fullhyd.com
EDITOR RATING
2.0
Performances
Script
Music/Soundtrack
Visuals
2.0
1.0
2.0
4.0
Suggestions
Can watch again
No
Good for kids
No
Good for dates
No
Wait for OTT
No
While we were watching Meelo Evaru Koteeswarudu (MEK), Saloni appeared in the second half. I then remembered that Saloni had played the heroine in Rajamouli's Maryada Ramanna and then disappeared. And got around to realizing how quite a lot of Rajamouli's heroines had met with the same fate - Gajala (Student No. 1), Bhumika and Ankita (Simhadri), Genelia (Sye) and Saloni (Maryada Ramanna). But then I remembered that there are also the others - Anushka, Shriya, Samantha, Tamannah - who are still around and doing quite well. And then I realized that I was still watching MEK.

MEK begins with the love story of Prashant (Naveen Chandra) and Priya (Shruti Sodhi). Priya is in love with Prashant, but he is not. She then asks him to take her to his village and his family and spend a week with her. He does so, and by the end of the week, falls in love with her himself, too.

Now Priya is the daughter of a multi-millionaire industrialist ABR (Murali Sharma). ABR promptly proceeds to denounce their love, and asks Prashant what he can give his daughter with his (Prashant's) middle-class lifestyle. And that is where the twist comes in.

ABR promptly decides to lose and puts out an ad in the newspaper that he will give one crore rupees to anyone who can suggest a loss-making business to him. In comes Thatha Rao (Posani Krishna Murali), a failed film producer, who tells him that he will make a super flop movie that will ensure losses. He then proceeds to sign up a flop director Rold Gold Ramesh (Raghu Babu) and an unheard of hero Veera Babu (Prudhvi), and begins a movie. The entire second half shows ABR watching the movie that is made. And this movie with the worst script possible becomes a hit. And ABR realizes about "anandam".

MEK begins with a completely juvenile love story that is painful to sit through. The fact that the leads are the ones who appear least interested has a lot to do with it. Before you can thank your stars that they disappear in the second half, a completely different movie within a movie begins with Prudhvi as the hero. This is a spoof of every possible movie in recent times, and is neither funny nor engaging. Prudhvi doing spoofs for a few minutes is fine and passable, but having a full second half dedicated to these is unwatchable and unpardonable. anthe comedy in the first half is full of double entendres, and it is a wonder the censor board passed this trash with just a UA.

The film looks decent and is well-shot, but that hardly matters. There are just two songs thankfully, and both come and go pretty quickly.

MEK is one of the worst movies this reviewer has sat through - and after four plus years of watching Telugu movies week after week, that is saying something. Please avoid this one like the plague.
Share. Save. Connect.
Tweet
MEELO EVARU KOTISWARUDU SNAPSHOT 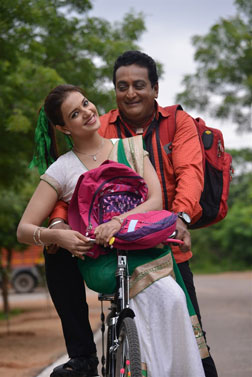 ADVERTISEMENT
This page was tagged for
Meelo Evaru Kotiswarudu telugu movie
Meelo Evaru Kotiswarudu reviews
release date
Naveen Chandra, Shruti Sodhi
theatres list
Follow @fullhyderabad
Follow fullhyd.com on
About Hyderabad
The Hyderabad Community
Improve fullhyd.com
More
Our Other Local Guides
Our other sites
© Copyright 1999-2009 LRR Technologies (Hyderabad), Pvt Ltd. All rights reserved. fullhyd, fullhyderabad, Welcome To The Neighbourhood are trademarks of LRR Technologies (Hyderabad) Pvt Ltd. The textual, graphic, audio and audiovisual material in this site is protected by copyright law. You may not copy, distribute, or use this material except as necessary for your personal, non-commercial use. Any trademarks are the properties of their respective owners. More on Hyderabad, India. Jobs in Hyderabad.