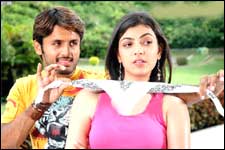 Krishna KBS / fullhyd.com
EDITOR RATING
3.0
Performances
Script
Music/Soundtrack
Visuals
NA
NA
NA
NA
Suggestions
Can watch again
NA
Good for kids
NA
Good for dates
NA
Wait to rent it
NA
Nitin showcased his six-pack and bulging muscles in his last release Takkari, and follows suit here, too. But then it is difficult to shake off an image, and he'll perhaps always be looked at as an effeminate adolescent, whatever he does - grow muscles or sports a stubble. A pity, that, as he has indeed worked hard on his acting and dancing. How you wish that he had spent some time while deciding on the script.

But then, you can't blame him - he only gets to select from the choices that he is given, and in this case the list must have read something like this:

a. A mindless musical like Jayam
b. A superfluous challenge a la Sye
c. Both of them

Nitin, being at an age where success is equated to competence, presumably chose "c", (forgetting that Sye in the hands of a lesser director would have been as obnoxious as its villain, and that people are still wondering how Jayam became a hit). The result is the director ended up making a film which reads like this:

This in lay terms would read as a mindless non-melodious romance with scenes of the hero mocking an abhorrent villain sticking out like cherries on a cake.

Aatadista begins in the usual Tollywood manner - depicting a wastrel hero. In this case, it's Chinna (Nitin), the son of Lion Rajendra (Nagendra Babu). Don't know what it is with wastrels and our directors, but every other movie seems to have a wastrel as the protagonist. Probably there is a message there. Though, for the heck of me, I can't imagine what it could be.

Being a hero, he does the next obvious thing, and falls in love with a lass, who is as pretty as she is vacuous (and as she is pretty vacuous, she should take it as a compliment). Now Sunanda (Kajal) is the daughter of Raghunath (Raghuvaran), who is the business rival of the lion. So, well, the dads get together and decide that they have had enough of the quarrel, and want to get the kids married.

Add to this, there is the usual bad guy -- horrible Bonala Shankar, a baron in the tobacco industry and an MLA to boot. He is hand in glove with Raghunath, and the rest of the film is about how Chinna teaches the bad guys a lesson, and while he is at it, teaches the audience a lesson or two, too (which are hopefully learnt).

Aatadista is an average Telugu movie in every sense of the word. There is a sense of déª  vu to the proceedings, and worse, it drags. Yes, it gets a bit pacier in the second half, but you are past minding it, as by then you have either walked out or are fast asleep.

The acting is average - not bad, but nothing stands out. Watch it for Raghuvaran - it's probably his last film. Though he doesn't have a meaty role, he does, as usual, well; and as Nagababu shows when he tries to imitate him, no one can really do it without coming up with a load of unintentional comedy.

You won't get a headache if you sit through Aatadista, but no promises.
Share. Save. Connect.
Tweet
AATADISTA SNAPSHOT

ADVERTISEMENT
This page was tagged for
Aatadista movie names list
Aatadista
Aatadista telugu movie
Aatadista reviews
release date
Follow @fullhyderabad
Follow fullhyd.com on
About Hyderabad
The Hyderabad Community
Improve fullhyd.com
More
Our Other Local Guides
Our other sites
© Copyright 1999-2009 LRR Technologies (Hyderabad), Pvt Ltd. All rights reserved. fullhyd, fullhyderabad, Welcome To The Neighbourhood are trademarks of LRR Technologies (Hyderabad) Pvt Ltd. The textual, graphic, audio and audiovisual material in this site is protected by copyright law. You may not copy, distribute, or use this material except as necessary for your personal, non-commercial use. Any trademarks are the properties of their respective owners. More on Hyderabad, India. Jobs in Hyderabad.