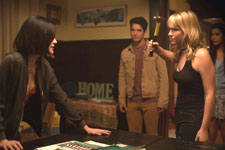 T J Reddy / fullhyd.com
EDITOR RATING
2.0
Performances
Script
Music/Soundtrack
Visuals
4.0
1.0
1.0
1.0
Suggestions
Can watch again
No
Good for kids
No
Good for dates
No
Wait for OTT
Yes
We don't need a demonic game of Truth or Dare to express our honest feelings about this "horror" film. On the contrary, we dare this film's derp-y demon to stop us from spewing some well-deserved criticism against it and its story. But before we put some truths ahead of some dares, the plot.

Little do they know that the game they have played is cursed (no, we are not kidding). While the other students in their college bring back STDs from their debauchery-fuelled break, our lead characters bring back this game. It will not let them out of its vice-like grip as it persuades them to complete impossible dares or makes them confront some hard truths.

This film's primary idea is a weird amalgamation of the excellent It Follows, the middling Final Destination and the infuriating Nerve. While trying to explain how a harmless game of truth or dare turned into a game of life and death, the film talks about how demons can possess humans, objects, and also ideas. That's a clever way of taking the blame off the film's four credited writers. Just say a demon-possessed this film's script and ruined the three ideas it blatantly stole from pre-existing properties.

The characters in the movie are some of the most reprehensible, vile and unlikable people ever put to the silver screen. The fact that the film has six lead characters and gives the audiences little to no reason to care about any of them is a testament to the sheer incompetence of the writing. The characters and their sophomoric tribulations which include having crushes on friends' boyfriends, cheating on boyfriends, day drinking, reinforcing manhoods etc. quickly kaibosh any attempts at making them original or relatable. Add to that the fact that every single one of the characters gets over the deaths of their friends within the time it takes the audiences to roll their eyes at the poorly conceived scenes, and we have a recipe for viewer apathy.

To be fair, none of the actors hired to portray these caricatures is inherently bad. Lucy Hale, Tyler Posey, Voilett Beane and co have all done well for themselves on the small screen with Pretty Little Liars, Teen Wolf, The Flash and so on. The fact that they are recognisable faces playing terrible characters while the filmmakers hope that their TV clout carries over to this insipid exercise in jumpscare filmmaking is infuriating.

Just to add insult to injury (SPOILER ALERT, if you really care), the filmmakers have these characters infect the entire population of the world with their rule-free game while giving the finger to any last member of the audience who even dared to connect with these moronic self-serving #$@%^s. Why does this movie hate us?

We fostered such a high degree of disdain for these characters simply because there was nothing else in this movie that distracted us from them. The film is filled to the brim with poorly constructed jumpscares and supposed scary moments that will leave most of you rolling on the aisles with laughter. It lacks moments of genuine quality in both the sound and the visual departments even though it borrows heavily from the excellently scored It Follows and the deviously well-crafted gorefests that are the Final Destination films.

While the score is mostly inoffensive even if utterly forgettable, the visuals are on a whole new level of silliness. This is a film that is in love with exposition. There are scenes upon scenes of characters sitting and talking about their clichéd lives with stock lines from screenwriting for dummies while even basic filmmaking techniques like shot-reverse shots are abandoned from time to time. And you are afforded a hearty laugh thanks to the most gut-splittingly hilarious scary faces since the cinematic adaptation of Stephen King's Sleepwalkers. One of the characters refers to these faces as images being run through a bad Snapchat filter, and for this one moment of righteous self-awareness, we award this film a rating point.

Anthony Lane once said that only either classics or trash survive the ravages of time. This sentiment can be applied to movies as well. Truth Or Dare is one of those films that fits in perfectly in the latter category as it acts a grim warning to every budding filmmaker.

P. S. Hawking Facebook around in a film about a game that involves people meeting their doom after their deepest secrets are exposed reeks of bad optics.
Share. Save. Connect.
Tweet
TRUTH OR DARE SNAPSHOT 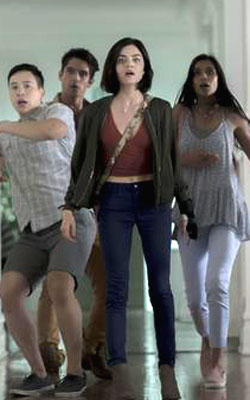 ADVERTISEMENT
This page was tagged for
Truth or Dare english movie
Truth or Dare reviews
release date
Lucy Hale, Tyler Posey
theatres list
Follow @fullhyderabad
Follow fullhyd.com on
About Hyderabad
The Hyderabad Community
Improve fullhyd.com
More
Our Other Local Guides
Our other sites
© Copyright 1999-2009 LRR Technologies (Hyderabad), Pvt Ltd. All rights reserved. fullhyd, fullhyderabad, Welcome To The Neighbourhood are trademarks of LRR Technologies (Hyderabad) Pvt Ltd. The textual, graphic, audio and audiovisual material in this site is protected by copyright law. You may not copy, distribute, or use this material except as necessary for your personal, non-commercial use. Any trademarks are the properties of their respective owners. More on Hyderabad, India. Jobs in Hyderabad.