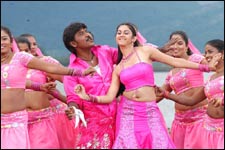 Deepa Garimella / fullhyd.com
EDITOR RATING
1.5
Performances
Script
Music/Soundtrack
Visuals
5.0
2.0
1.0
2.5
Suggestions
Can watch again
No
Good for kids
No
Good for dates
No
Wait to rent it
No
Finding a ganja-seller, a chain-smoker, a health minister, a murderer and a streetwalker in the same room can be funny. Finding that there's someone actually playing all the five rolled into one, can be nauseating.

Many smokers don't like getting caught smoking, but Gangavaram Sailaja (Mumtaz) is something else. Not only smoking, the health minister also hates to get caught for murders, money-laundering and other itsy-bitsy felonies that she keeps committing from time to time. She has the loyal assistance of a doctor, a lawyer and a policeman in this.

These three are the elder brothers of Raja (Lawrence), this chap who lives in Araku with a sister-figure and a nanny who brought them up. Back in their childhood, their father was lost to the collective negligence and subsequent brutality, of a doctor, a policeman and a lawyer. The stricken family decides that Raja will turn his brothers into white-washed versions of those three.

Now, the last person who knew how to make elder siblings listen to the younger ones, passed away in 1870 BC, so even as Raja strives hard to make ends meet and to get his brothers a decent education, those fiends are turning out to be about as sweet as a bunch of Nazis on a summer camp with Lord Voldemort.

Raja finds this out when the doctor brother pulls the plug on his sick sister when she doesn't come up with enough money for her operation, and the other two cover up his tracks by chopping the nanny's head. The furious Raja decides to get back.

He sweet-talks his brothers into moving in with them. He becomes their anonymous perpetrator now, and keeps making threatening phone calls to them. But the three wear expressions that look like they should slip into something more comfortable - like a coma, so that they never quite figure out that it's Raja who's making all those calls.

It is the outwitted, defeated Sailaja who puts two and two together, and leads the brothers into finishing off Raja. A lot of impaling, bloodying and screaming later, Raja decides that since he's the Brahma who created the three monsters in the siblings, he must now be the Shiva who destroys them.

Rajadhiraja has a lot of 'mass' elements, down to the rustic blaring trumpets in the songs, and the sleaze that doubles as comedy. The script is just a series of one gory fight after another, and the characters are too exaggerated.

Lawrence's dances aren't quite as unbelievable in this film, and as for his acting, he stands out more for enthusiasm rather than for any real talent. Mumtaz, with an uncanny resemblance to Sita, has done quite an interesting job.

This one's a low-end product that our fellow-countrymen from across the southern border decided to make a quick buck out of - and it's one of the quickest ever made. If you're so angry with yourself that you'd brutally pummel 3 hours of your life, you might as well get your own table fan along - Sandhya's air-conditioning's also on a vacation.
Share. Save. Connect.
Tweet
RAJADHIRAJA SNAPSHOT

ADVERTISEMENT
This page was tagged for
Rajadhiraja telugu movie
Rajadhiraja reviews
release date
Lawrence, Kamna Jethmalani
theatres list
Follow @fullhyderabad
Follow fullhyd.com on
About Hyderabad
The Hyderabad Community
Improve fullhyd.com
More
Our Other Local Guides
Our other sites
© Copyright 1999-2009 LRR Technologies (Hyderabad), Pvt Ltd. All rights reserved. fullhyd, fullhyderabad, Welcome To The Neighbourhood are trademarks of LRR Technologies (Hyderabad) Pvt Ltd. The textual, graphic, audio and audiovisual material in this site is protected by copyright law. You may not copy, distribute, or use this material except as necessary for your personal, non-commercial use. Any trademarks are the properties of their respective owners. More on Hyderabad, India. Jobs in Hyderabad.