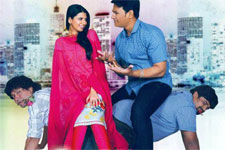 Kritika Deval / fullhyd.com
EDITOR RATING
1.5
Performances
Script
Music/Soundtrack
Visuals
1.5
1.5
1.5
1.5
Suggestions
Can watch again
No
Good for kids
No
Good for dates
No
Wait for OTT
No
This writer got her set of movies to watch two days ago, and, upon being told to watch Blended and Santray, made a thoroughly gratuitous joke involving, well, orange juice, that nearly got her beaten up. Then came the time to watch the film, wherein it quickly became clear that karma absolutely exists.

Okay, so you have 3 guys, Mast Ali, Akbar bin Tabar, Mohsin Ahmed, who don't really have much to do with their lives. We blame The Angrez despite its ability to make us laugh more than our bodies should physically be able to take. The latter excellent film has blame piled up at its door for every "Hyderabadi" film that has the gall to pass off as heroes, characters who are as exciting as flies flying around on cow dung - oddly fascinating when you're a white person seeing something of that sort for the first time, but a sad, ugly and eventually ignorable part of life if said phenomenon is indigenous to your country.

However, this genre exists (thanks, The Angrez!), as do these heroes (again, thank you like we'd thank our to-be lobotomist - aka Santray). And so we get to watch unwatchable movies about fat men, men with puke-inducing teeth, and men who cannot string a thought together to form a reasonable sentence, go after some nubile young thing who's only reason to exist is so that the aforementioned lechs have someone to call "colour". Wait. Calling a hittable-on young woman "colour" - that's a thing? Have these people ever heard of a little something called Segragation?

So, there is all this regular stuff happening wherein these guys are useless people who are running out of money and mooching off of whoever happens to be handy, and this chick comes along, and the "First Encounter" is of eyes and boobs. We get it. The TA is supposed to be guys. But haven't sexual harassment laws just been tightened to make this sort of thing illegal?

Then, there is the outright stalking by the Salim Pheku guy who isn't the least bit funny because how can anybody listen to those lines when you'd rather imagine Japanese tentacle monsters crawling out of those teeth? Also, who are we kidding? It isn't as if he's such a comedic genius that that even whatever is the inverse of a sentence sounds funny coming from his mouth (unlike Salim Pheku from The Angrez and a couple of other movies afterwards).

The thing is, there is slice of life, and then there are the ragged chunks of life left after someone has gone through it with a blunt saw - the latter of which partitioning of life in general Santray seems to be going for, which leaves you with a rather inedible and inconvenient slice of orange which you can neither eat nor drink.

Oh, wait, lest we forget to mention it, there are songs as well - a mash of Bollywood hits with "dance" performances to beat every single Bhojpuri video you have ever Googled just for shits and giggles (if you've never done so, do it right now - preferably on your phone while you are safely ensconced on a toilet bowl. they will make you want to shit and giggle.).

The point is... there is no point. Literally. This film is just plain bad. This is the kind of film you watch when you lose a bet real hard. Or, as in our case, if you're getting paid for it.
Share. Save. Connect.
Tweet
SANTRAY SNAPSHOT

ADVERTISEMENT
This page was tagged for
Santray movie story
santray Hyderabadi movie film nagar
santray movie
Santray hindi movie
Santray reviews
Follow @fullhyderabad
Follow fullhyd.com on
About Hyderabad
The Hyderabad Community
Improve fullhyd.com
More
Our Other Local Guides
Our other sites
© Copyright 1999-2009 LRR Technologies (Hyderabad), Pvt Ltd. All rights reserved. fullhyd, fullhyderabad, Welcome To The Neighbourhood are trademarks of LRR Technologies (Hyderabad) Pvt Ltd. The textual, graphic, audio and audiovisual material in this site is protected by copyright law. You may not copy, distribute, or use this material except as necessary for your personal, non-commercial use. Any trademarks are the properties of their respective owners. More on Hyderabad, India. Jobs in Hyderabad.