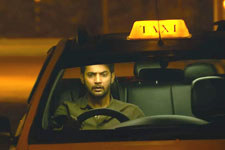 Sai Tulasi Neppali / fullhyd.com
EDITOR RATING
2.0
Performances
Script
Music/Soundtrack
Visuals
4.0
4.0
1.0
5.0
Suggestions
Can watch again
No
Good for kids
No
Good for dates
No
Wait for OTT
No
It's criminal to name a film Top Gear when it features one of the all-time least exciting car chases. While the protagonist Arjun (Aadi Saikumar) drives his janky yellow taxi around Hyderabad evading assassins, the camera flips between extreme close-ups of his spinning wheels and drone shots of his cab winding up and down the same four scenic roads of the city - all deserted. The chase hardly qualifies as one, given the yawning stretch of tar between him and real danger. To top it, a raucous background score momentarily turns you deaf. So let's call this poorly-scripted, badly-directed film what it is: Empty Tank or Busted Engine. Any bad car pun will do.

Top Gear's plot is a ripoff of the 2004 movie Collateral, where Jamie Foxx plays a cab driver who picks up a hitman (Tom Cruise) and unwittingly becomes his getaway driver. Here, two drug dealers (Brahmaji and Satya Rajesh) climb into Arjun's cab for a short trip. But before the night is over, Arjun finds himself in the center of a vast conspiracy involving the drug mafia, the police, and a bag containing cocaine worth hundreds of crores. To make it out alive, and save his wife (Riya Suman), Arjun must find this bag and hand it over to druglord Siddharth (Mime Gopi), while keeping the police at bay.

Even after lifting its best ideas from a 15-year-old movie, Top Gear can't muster a decent screenplay or production design to cover its tracks. Something's amiss in nearly every scene. Like the bookshelves inside a criminal's house that are stacked high with Java and C++ primers. Or the plausibility of a lone, lumbering, middle-aged villain in a bathrobe being able to take down a horde of elite police officers in bullet-proof vests.

Director Sasikanth's unrefined hand is further magnified by the equally unaesthetic cinematography. I'm talking zoom-ins of cleavages and sweaty faces. I'm talking gratuitous scenes of youngsters shooting up drugs and passing out under neon lights, their noses still coated in OD-levels of white powder. And all this paired with the year's most psychotic background score which, had this movie come out in 2004, would have made the CIA's torture chamber playlist.

Except for Aadi, the cast members perform like they are dead men walking. Actually, these characters are dead men walking. I counted at least twenty of them getting killed off minutes after being introduced - all in clumsy ways. I suppose the filmmakers were aiming for a Tarantino vibe of mindless violence, but forgot to add any style or substance, or, for that matter, sanity to the script. Aadi's sincerity counts for nothing in the end. Mime Gopi's villainy has a yuckiness to it, especially as the cameraman seems intent on showing us every bead of perspiration dripping down Gopi's face. Two hours trickle by like two days.

I can forgive the shoddy writing and the lascivious editing, and because its New Year eve and I'm feeling super-generous, I'll even give the music guy (Harshavardhan Rameshwar) a pass. But what makes me mad is the audacity with which the movie's ending teased a sequel! My answer to this, as Greta Thunberg's memeable quote goes, is: "How daaare you?!"
Share. Save. Connect.
Tweet
TOP GEAR SNAPSHOT 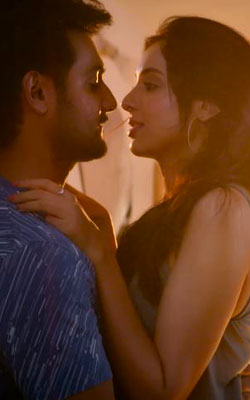 ADVERTISEMENT
This page was tagged for
Top Gear telugu movie
Top Gear reviews
release date
Aadi Saikumar, Riya Suman
theatres list
Follow @fullhyderabad
Follow fullhyd.com on
About Hyderabad
The Hyderabad Community
Improve fullhyd.com
More
Our Other Local Guides
Our other sites
© Copyright 1999-2009 LRR Technologies (Hyderabad), Pvt Ltd. All rights reserved. fullhyd, fullhyderabad, Welcome To The Neighbourhood are trademarks of LRR Technologies (Hyderabad) Pvt Ltd. The textual, graphic, audio and audiovisual material in this site is protected by copyright law. You may not copy, distribute, or use this material except as necessary for your personal, non-commercial use. Any trademarks are the properties of their respective owners. More on Hyderabad, India. Jobs in Hyderabad.