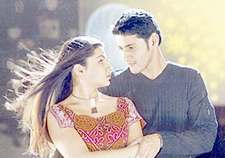 Bobby is a tragedy - it ends with the lead pair dying in the end (lest we be accused of revealing the suspense, there's no suspense - the movie starts by showing them dying). And this is going to be one of several reasons that the film is likely to fail, despite plenty of above average stuff.

Let's get one thing straight - people don't go to watch tragedies. They are out for a good time, 2-1/2 hours of entertainment. Which was the last Telugu hit that had the hero and heroine dying in the end? Like we said, tragedies start with an inherent disadvantage - that people don't like to see them - and need to be brilliant to make up for that. Like Ek Duuje Ke Liye, which had a novel theme, and outstanding performances by and excellent chemistry between the lead actors. Bobby has none of these.

Let's look at the theme first: Bobby (Mahesh Babu) is the son of KR (Raghuvaran), an big-time industrialist who's also a quasi-ganglord. Bobby falls in love with Bhagyamati (Aarti Agarwal), the daughter of Yadagiri (Prakash Raj), a union leader and ganglord himself, and KR's archrival of 20 years. 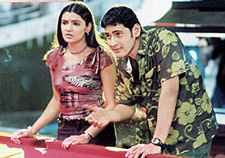 The couple elope since there's just no way the families will agree to the union, but return in a few days when they realize that the powerful dads are setting the whole state on fire as revenge against each other. Thereupon they successfully convince their parents for their marriage, but a small unfortunate incident results in everything going awry and in the kids' end.

That's the tale for you - the age-old stuff about kids being in love and their folks hating it. Brilliance would need to come in primarily in the depiction of the romance between the lead pair for the audience to be deeply attached to them (remember Segal's masterpiece?) and therefore still talk highly of the film despite it getting them low in the end, but the chemistry between Mahesh Babu and Aarti Agarwal positively sucks.

Part of this is because the tale concentrates more on comic fooling around between the two rather than on letting tenderness build in. The best love stories are all about the depiction of warm and tender relationships that get you completely involved with the characters. Think of Geetanjali, the last Telugu tragedy hit. The courtship in Bobby is too short and unconvincing - unrepentantly copying a Titanic sequence - and the rest of the film suffers from poor conceptualization of romantic situations. 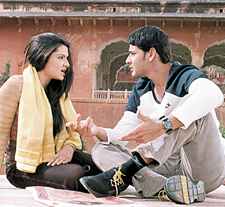 A much more important reason for the chemistry failing is the performances of the lead pair. Mahesh Babu may be good in dances and fights and is generally certainly better than some of his hyped contemporaries, but lacks the kind of flair for comedy that is needed to make audiences adore the guy who's serenading his girl, and then cannot bring in the intensity needed for the love to tug at your heartstrings as he protects and comforts her. He has his moments such as the first confrontation with Yadagiri that really stands out, but fails to build a character that can rise above the fact the film will end in a tragedy.

A bigger contribution to the failure is from Aarti Agarwal, who's easily one of the most untalented actresses of Tollywood. Sheer serendipity sees her in big banners, and it's a shame how much looks dominate in Tollywood. You just don't feel warm or protective about her, like we said earlier. This is gross miscasting - you need a brilliant performer for what will primarily be a love story focusing on just 2 persons, especially if it has to withstand their death in the end.

There can't be much redemption in a romantic film when the romance itself fails, but mention must be made of Prakash Raj's emoting. Also, the second half is pretty well thought out in several parts, especially the ones after Bobby and Bhagyamathi return and Bobby works to unite the sworn foes, though the denouement (gangwars and bloodshed) is still a wrong choice in a film that aims to be a romance.

The dialogues are generally good. The comedy is insipid, though, and the music by Mani Sharma is ordinary (there's a strong strain of Kushi's Premante... in the background signature theme). Some of the graphics, especially in the song Adugadugu, are quite cheesy - who'd they hire to do the FX, some Red Hills instant graphics DTP shop?

There was simply no reason to make this a tragedy - it was a wrong call, and the film is quite likely to pay for the mistake.
Share. Save. Connect.
Tweet
BOBBY SNAPSHOT
See Bobby full details
BOBBY USER REVIEWS
1 - 12 OF 12 COMMENTS
POSITIVE  |  NEGATIVE |  NEWEST  |  OLDEST  |  MOST HELPFUL  |  LEAST HELPFUL
USER RATING
7.0
102 USERS
Performances
Script
Music/Soundtrack
Visuals
NA
NA
NA
NA
Can watch again - NA
Good for kids - NA
Good for dates - NA
Wait for OTT - NA
Ashik kumar on 13th Jul 2020, 2:34pm | Permalink
Performance of Mahesh and Aarthi are good.. storyline is suitable, direction is weak, graphics suck, few fights are noticed as mahesh is lifted by crane..
Sk on 6th May 2020, 9:03pm | Permalink
Worst review..learn how to write a review who are you to judge and confirm Arthiagarwal as untalented actress..better you improve your talent in writing reviews first
Sujatha Kumari on 14th Dec 2002, 11:26am | Permalink
The movie is for Mahesh Lover's. Graphics are disgusting in the movie..It has shown a lot of artificiality in the movie..Other than graphics, the movie is quite fine...good to go
RATING
6
Basaveswara Rao on 10th Nov 2002, 3:02pm | Permalink
Good performance by Mahesh. Direction is weak.
RATING
10
Raju on 5th Nov 2002, 3:19am | Permalink
One of the best movies i saw in recent times.
RATING
10
Yugandhar on 3rd Nov 2002, 5:17am | Permalink
we have very less heroes who have guts and who do films with a difference. it is from that line that comes Mahesh, who is undaunted to do any film which is good. the review here is quiet opposite to what the film is. each and every character, and especially Bobby (the character), is excellent. Mahesh excelled with excellence in Bobby. really very good movie to see, keep it up Mahesh. he is quiet same as a dialogue goes in the movie (naku diaryam ledhu, endhuko telusa, naku chinnappti nunchi bhayam antae teliyadhu kabatti).
RATING
10
Srinivas on 2nd Nov 2002, 11:17pm | Permalink
Very good movie.Mahesh's performance is superb.Every one must appriciate for his guts.Wonderful Mahesh.... Keep it up.
RATING
10
Idle Mind on 2nd Nov 2002, 3:53pm | Permalink
hai all... never mind whether the movie is hit or flop, as far as bobby is concerned u have to appreciate the guts of the young hero like mahesh to have attempted such a softline story.
he always loves to take risks thats y he has unique fan following.
all the best, mahesh... we r with u, go ahead.

RATING
8
Kishore Bandi on 2nd Nov 2002, 7:53am | Permalink
The songs are cool. Movies are just for entertainment. You cant say every scene - can we relate to reality? What the hell.

There are some absurds in the direction. Mahesh looked cool, liked the songs, and the special effects are pathetic.

Need some maturity in the industry.

ADVERTISEMENT
This page was tagged for
bobby telugu movie
Bobby telugu movie
Bobby reviews
release date
Mahesh Babu, Aarti Agarwal
Follow @fullhyderabad
Follow fullhyd.com on
About Hyderabad
The Hyderabad Community
Improve fullhyd.com
More
Our Other Local Guides
Our other sites
© Copyright 1999-2009 LRR Technologies (Hyderabad), Pvt Ltd. All rights reserved. fullhyd, fullhyderabad, Welcome To The Neighbourhood are trademarks of LRR Technologies (Hyderabad) Pvt Ltd. The textual, graphic, audio and audiovisual material in this site is protected by copyright law. You may not copy, distribute, or use this material except as necessary for your personal, non-commercial use. Any trademarks are the properties of their respective owners. More on Hyderabad, India. Jobs in Hyderabad.