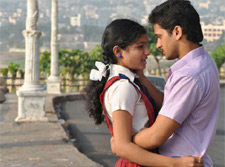 Deepa Garimella / fullhyd.com
EDITOR RATING
1.0
Performances
Script
Music/Soundtrack
Visuals
1.0
1.0
3.0
2.0
Suggestions
Can watch again
No
Good for kids
No
Good for dates
No
Wait for OTT
No
"This film is only for adults, ma'am. Do you have proof of your age?" the well-trained attendant at INOX's ticket counter asks us, before pulling out a form (presumably, to declare that we are older than 18) for us to sign.

That may as well have been a consent form for a surgery gone horribly wrong.

Because there's no two ways to say this - Oka Romantic Crime Katha is a film so bad it's a wonder how it managed to get itself a release. The makers of this story of teenage depravity have more issues than worrying about underage audiences, and they ought to start with getting themselves a film course, quick.

Tanmayi, Veena and Anju are 3 girls who become friends because they hang out at a bus stop. Veena is in college, and has a boyfriend Kiran, who claims to make short films. Tanmayi is a tenth-standard teenager who has a silent admirer called Sanjay. And Anju, who is in her Intermediate, basically sleeps around. Sanjay wants to impress Tanmayi with a nice bike, so he takes the most obvious route to earning money there is - chain-snatching.

One day, Anju discovers that she's pregnant, and gets an illegal abortion despite being a minor. In the meantime, the school-going Tanmayi and her boyfriend have teamed up to make a quick buck out of duping people on Facebook (don't even ask) and murdering them in cold blood. And Veena's lover has now taken to blackmailing her with videos of them having sex.

No problem is solved in any meaningful way. Anju, after her abortion, continues to sleep with so many men and get so many more abortions that get her uterus actually goes for a toss. Veena jumps off her college building and dies. And Tanmayi and Sanjay are finally convicted for their crimes and shot in an "encounter" by the police.

What deserves to be a forgettable Youtube clip has somehow been stretched to a full feature-length production (with a couple of songs, even) - one that confounds you repeatedly with its inanity. The makers want to tell you the motivations behind why the teenagers do what they do, but these efforts fall flat. Awkwardness and absurdity prevails all over, not helped at all by the abysmal performances. For example, Tanmayi discovers that her mom has an extra-marital affair, and shattered by the fact, then goes to Sanjay, declaring, "Sanjay, I want to sleep with you like your wife".

There's no writing in place, no creative process - just a bunch of amateurs who strung together a couple of scenes enacted by their friends. The actors mumble lines (that are anything but) and are low on energy, save for the girl who plays Tanmayi, who actually makes an effort to act. The film is so low on quality it's entirely possible that these "actors" were as stealthily shot by the maker as the sleazy Kiran shoots his unsuspecting girlfriends.

It's the kind of film that will be forgotten in a less than a week. Unfortunately, we won't - we watched it.
Share. Save. Connect.
Tweet
OKA ROMANTIC CRIME KATHA SNAPSHOT 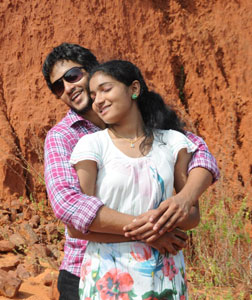 ADVERTISEMENT
This page was tagged for
Telugu movie OKa romettiku cream kadha
Oka Romantic Crime Katha telugu movie
Oka Romantic Crime Katha reviews
release date
Sai Anil, Manoj Nandam
Follow @fullhyderabad
Follow fullhyd.com on
About Hyderabad
The Hyderabad Community
Improve fullhyd.com
More
Our Other Local Guides
Our other sites
© Copyright 1999-2009 LRR Technologies (Hyderabad), Pvt Ltd. All rights reserved. fullhyd, fullhyderabad, Welcome To The Neighbourhood are trademarks of LRR Technologies (Hyderabad) Pvt Ltd. The textual, graphic, audio and audiovisual material in this site is protected by copyright law. You may not copy, distribute, or use this material except as necessary for your personal, non-commercial use. Any trademarks are the properties of their respective owners. More on Hyderabad, India. Jobs in Hyderabad.