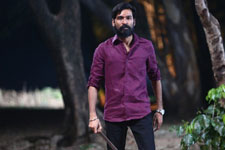 Ajay Kumar R / fullhyd.com
EDITOR RATING
6.5
Performances
Script
Music/Soundtrack
Visuals
8.0
6.0
5.0
7.0
Suggestions
Can watch again
Yes
Good for kids
No
Good for dates
No
Wait to rent it
No
Back in 2013, Kollywood actor Dhanush delivered a humbling and natural performance on a tragic yet beautiful tapestry called Raanjhnaa, that came close to being Shakespearean in its portrayal of an obsessive sort of love drenched in twisted passion, a little communalism and a pinch of politics - leaving a section of the audience wanting more.

And so Dhanush is back with another movie of a similar mood and genre, this time with politics, blood, a pinch of satire and the Shakespearean sort of love - all taking centrestage at once. So, does it take off well?

In this Tamil film dubbed into Telugu, Dhanush plays twins - Dharma and Yogi - born in a small town to an Opposition party activist with a speech disability. The activist, despite his affliction, is highly enthusiastic about politics and oratory. And so he decides to let Yogi fulfill his political ambitions and let Dharma get a college degree when the twins come of age. He begins taking Yogi out on political campaigns right from the latter's adolescence.

The town has a multinational industrial complex located on its outskirts, which is infamous for dumping Mercury-based toxins in the surrounding lakes and ponds. The toxins cause myriad genetic defects among newborns in the town. This leads to Dharma's and Yogi's father to join a protest to seal the industry off. After realizing that there are very few things that can possibly be done against a ruling party-funded MNC, the activist douses himself with petrol and dies. Rattled by this, Yogi, still a young teen, vows to someday climb the ladder of power and fulfill his father's political ambitions.

Yogi grows up to be a shrewd statesman with unwavering ideals and some real skill at street-fighting, while his brother Dharma turns out to be an intelligent, classy and kind math professor who lives under the shadow of his brother. The flamboyant and canny Rudra (Trisha) is Yogi's love interest and, strangely enough, his political rival. Rudra is a person who will walk that extra mile to get what she desires, and almost lacks a conscience. This coupled with precise calculations and some really slick tactics help her move up the political ladder almost effortlessly.

[Spoilers ahead] Yogi, through Dharma, comes to know that the MNC, which was "abandoned" after their father's immolation, is still operating as a dumping yard for Mercury-based effluents with the help of the ruling party, which also Rudra belongs to. Soon differences between Yogi and Rudra grow wide as the boundary between their public and personal lives starts to fade, and they are almost on the verge of calling it quits.

Amid opportunistic politics in the town and several attempts by the rival party at shattering the fabrics of the twins' lives, Dharma, who is nothing like his brother, is forced to come to the fore. And then begins a gripping drama about ruthless politicians and their vendetta.

Dharma Yogi shows you the lengths people often go for power, and the unimaginable risks they take for it. The film portrays a pretty accurate picture of negligent industrial facilities, political ambitions and megalomania among leaders. It also gives a pretty pithy message in a roundabout fashion - you don't crap where you eat. But Senthilkumar's direction has a few flaws as the story gets a bit predictable when Yogi comes to the fore, with a concept involving the psychology of twins. This ruins the narrative and almost eliminates one of the twins' personas, rendering the title pointless.

A major letdown in the film is the dubbing from Tamil to Telugu, which sounds unnatural and does not sync with the actors' body languages.

Trisha makes an impressive debut as the lead antagonist and carries the character seamlessly. Her capacity for evil should be exploited more, amped up in her future ventures. The only criticism here is that she gets almost no dialogues in the final scenes, and her emoting in some other scenes could have done with better editing.

Dhanush delivers flawlessly in a dual role, and does both Yogi and Dharma justice. From a soft and sensible Dharma to a hardy Yogi, he switches his expressions effortlessly. That's some efficient acting and editing.

The visuals (Venkatesh S) are pretty gorgeous in several scenes involving the countryside and forests. The music (Santhosh Narayanan) is folksy but drab.

Don't expect any suspense (despite the genre) as the movie doesn't leave any breadcrumbs for you to pick up - it is all out there. Watch Dharma Yogi for Trisha's outstanding villainy and for Dhanush's refreshing role, and also for an almost great storyline.
Share. Save. Connect.
Tweet
DHARMAYOGI SNAPSHOT 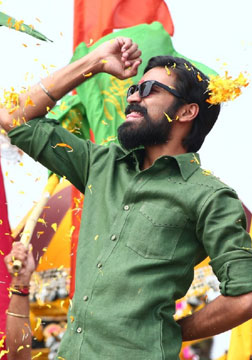 See Dharmayogi full details
DHARMAYOGI USER REVIEWS
1 - 2 OF 2 COMMENTS
POSITIVE  |  NEGATIVE |  NEWEST  |  OLDEST  |  MOST HELPFUL  |  LEAST HELPFUL
usualsuspekt on 2nd Nov 2016, 2:23pm | Permalink
This movie is so slow its a drag.
And Trisha is completely out of place for the role.
Watch this one only if you are a Dhanush fan or Trisha fan for that matter.
yojimbo on 1st Nov 2016, 5:33pm | Permalink
character names got mixed up in this paragraph ?? confusing

ADVERTISEMENT
This page was tagged for
Dharmayogi telugu movie
Dharmayogi reviews
release date
Dhanush, Trisha Krishnan
theatres list
Follow @fullhyderabad
Follow fullhyd.com on
About Hyderabad
The Hyderabad Community
Improve fullhyd.com
More
Our Other Local Guides
Our other sites
© Copyright 1999-2009 LRR Technologies (Hyderabad), Pvt Ltd. All rights reserved. fullhyd, fullhyderabad, Welcome To The Neighbourhood are trademarks of LRR Technologies (Hyderabad) Pvt Ltd. The textual, graphic, audio and audiovisual material in this site is protected by copyright law. You may not copy, distribute, or use this material except as necessary for your personal, non-commercial use. Any trademarks are the properties of their respective owners. More on Hyderabad, India. Jobs in Hyderabad.