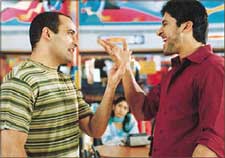 An emotional Bollywood flick is definitely not recommended by the doctors for ailments, especially for indigestion. They might perhaps prescribe it for intensive shock therapy. However, a light-hearted comedy film is not such a harmful affair, unless, of course, you try to swallow it. And under normal circumstances you wouldn't try doing that, but we're not talking normal here. 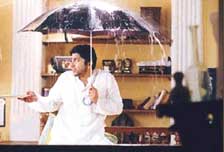 A look at the first few frames of Hungama reveals enough for a heedless dweeb to loosen his tight pants and relax his mouth muscles. Because right from the start all that the movie does is set up itself to unleash a relentless attack of laughs. These laughs are manufactured mostly by the situations the characters get themselves into. Let's meet a few of them then:

Nandu (Aftab): He's this dopehead trying to make it big as a singer. His married landlady fancies her chances of eloping with him and he fancies his chances with Anjali, his roommate by fate.

Anjali (Rimi Sen): Hailing from the village, she's stuck with Nandu as a roommate and a job that she got by lying bare-faced. She's conned her boss Jitu into believing that she's the daughter of the business tycoon Radheshyam and wants to make a mark for herself out of the shadow of her dad.

Jitu (Akshaye Khanna): A rebellious son, he sets up his showroom by robbing his own house! When Anjali approaches him for the job, he's thrilled to have her, expecting to become the only son-in-law of the industrial mogul, Radheshyam. 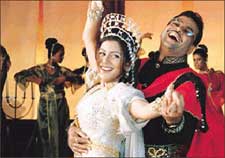 Radheshyam (Paresh Rawal): This tycoon is but an old village coot. He finances everything from the village itself (Laloo, someone?). Now he wants his wife Anjali to learn the ways of city mongrels. So they shift to their villa in the city to become part of the elite. Anjali (that lady from Hum Paanch): A standard village wife learning how to run on the city treadmills, she's all furious because she thinks her hubby is having an affair with the city bird Anjali and that he's got illicit children. This she concludes from the constant bickering of Kachra bhai (Shakti Kapoor). She's also mad because her hubby seems to believe that she's having an affair with Jitu.

Kachra bhai (Shakti Kapoor): This guy believes that Radheshyam's son is engaged to his daughter. But in reality, the guy who engages his daughter was just a conman using Radheshyam's goodwill. 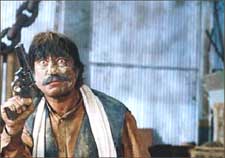 So we have a Jitu telling Radheshyam that he loves Anjali, and the only Anjali that Radheshyam knows, being his wife. Then we have Nandu (Aftab) trying to shoo away a suitor (Rajpal Yadav) for the other Anjali, who's running in and out of Radheshyam's villa pretending to live there. We also have a Kachra bhai threatening Radheshyam to give up his son for marriage while the actual conman is hiding away. Apart from this, we got a load of other jesters further entangling this web of mistaken identities, mistaken circumstances and mistaken mistakes. Put all this into a Telugu daily serial and even that would not fail to entertain! 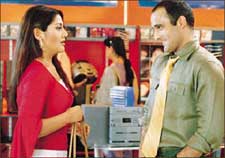 ADVERTISEMENT
This page was tagged for
Hungama hindi movie
Hungama reviews
release date
Akshaye Khanna, Aftab Sivdasni
theatres list
Follow @fullhyderabad
Follow fullhyd.com on
About Hyderabad
The Hyderabad Community
Improve fullhyd.com
More
Our Other Local Guides
Our other sites
© Copyright 1999-2009 LRR Technologies (Hyderabad), Pvt Ltd. All rights reserved. fullhyd, fullhyderabad, Welcome To The Neighbourhood are trademarks of LRR Technologies (Hyderabad) Pvt Ltd. The textual, graphic, audio and audiovisual material in this site is protected by copyright law. You may not copy, distribute, or use this material except as necessary for your personal, non-commercial use. Any trademarks are the properties of their respective owners. More on Hyderabad, India. Jobs in Hyderabad.