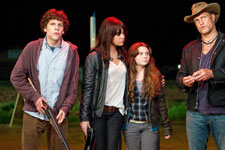 Punarvasu Pendse / fullhyd.com
EDITOR RATING
8.0
Performances
Script
Music/Soundtrack
Visuals
8.0
6.0
8.0
8.0
Suggestions
Can watch again
Yes
Good for kids
No
Good for dates
Yes
Wait to rent it
No
There are some movies whose originality floors the viewer. Showcasing a never-before-seen experience to the uninitiated, these movies define cinema as an art. Zombieland: Double Tap doesn't really care about trying to be one of those, thank you very much. It sticks to being funny (very) and self-referential (constantly), and dishes out a metric fuckton of fan-service. The key point - all of these things are accomplished in a very fun manner.

In 2009, debutant director Ruben Fleischer made Zombieland, a movie that was irreverent and self-aware, and became surprisingly popular thanks in no small part to its quirky and much loved cast, featuring a brilliant cameo by Bill Murray. Since then, everyone involved has progressed to bigger things - Fleischer has directed the blockbuster hit Venom, and Harrelson, Eisenberg, Stone and Breslin have multiple Oscar nominations (with Stone having a win) between them. It, therefore, came as a pleasant surprise that we were getting a sequel after a decade.

Columbus (Jesse Eisenberg), Wichita (Emma Stone), Tallahassee (Woody Harrelson) and Little Rock (Abigail Breslin) have sort of settled down in their own version of a home in, you guessed it, the White House. The zombies have since evolved, becoming smarter (the Hawkings), or sneakier (the Ninjas), or the scariest - resistant to bullets (the T-800s).

A couple of arguments disturb the domestic bliss of the foursome, and an awkward note later the gang is back on the road searching for Little Rock. Only this time, they have another companion, Madison (Zoey Deutch), a bubbly character who has survived by hiding inside a refrigerator. The destination is Graceland, the sprawling estate that belonged to Elvis Presley who Tallahassee adores, but fate and zombies have other plans for our friends. We encounter a few more characters on the way, including fellow Elvis fan Nevada (Rosario Dawson), and the Tallahassee and Columbus doppelgangers (Luke Wilson and Thomas Middleditch), before being ultimately led to, quite literally, a cliffhanger.

It is hard to like the basic concept of zombies - it is overused, boring, and frankly not very creative as far as horror tropes are concerned. I like it even less when zombies are used a foil to make shows or movies that tackle other social issues. And I truly do not enjoy the realisation at the end that "Gasp! The real zombies were the humans all along!"

Zombieland was a product of a simpler time, when we didn't have multiple zombie-filled productions including films, TV shows and video games. Zombieland: Double Tap even acknowledges this fact with its clever fourth-wall breaking intro where Columbus thanks us for choosing their zombie franchise from the many available ones in 2019. Zombieland: Double Tap is the kind of sequel that, while not necessarily being better than the original, is a fantastic companion film.

It is great, in 2019, to sit back and relax during a movie. It feels liberating to see that the zombies here are not a metaphor for human grit or any of that stuff. There are arguments made that the movie feels dated, but I feel that it is meant to look so. So much so, in fact, that it feels like Flesicher took special care to make sure they got their references right. The most fun part about Zombieland: Double Tap is how they use the original Zombieland as one big pop culture reference. Being this self-referential might have been annoying in another cases but here it is just *insert chef's kiss* fantastico.

The cast was always going to be the main talking point of the Zombieland sequel, and it's reassuring that the fantastic chemistry they shared is still rock-solid after a decade. There is also an unexpected but thoroughly welcome guest appearance by Bill Murray which really is the cherry on top. Harrelson, Eisenberg and Stone are all as good as one remembers - but Breslin's Little Rock seems to mind playing the rebellious young girl. Not that her performance isn't as solid - she just needed more from the script.

Zoey Deutch needs her own write-up for her performance in Zombieland: Double Tap. To be completely frank, her introduction as a caricature of a "valley-girl" rubbed me the wrong way. The jokes on Madison being ditzy and vapid seemed like stereotypical hazing of a classic Hollywood trope, and they are to an extent, but Deutch manages to portray this underlying idea that Madison is smarter than what everyone considers her to be. Deutch does much with a character that has barely any depth with such impeccable comic timing, that one of the most one-dimensional characters in the film is easily its most memorable.

The opening sequence of the movie plays along to Metallica's Master Of Puppets - this is how you know that Zombieland: Double Tap means business. David Sardy is at the helm again, and even the trailer features music by AC/DC - what's not to love?

To find out more about the Zombie Kill of the Week, go watch Zombieland: Double Tap in your nearest theatre. Oh, and stay after the credits roll - you won't be disappointed.
Share. Save. Connect.
Tweet
ZOMBIELAND 2: DOUBLE TAP SNAPSHOT 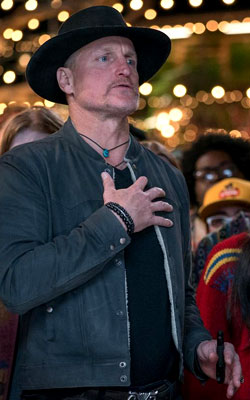