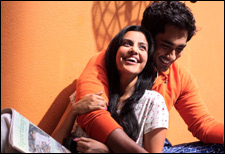 Deepa Garimella / fullhyd.com
EDITOR RATING
3.0
Performances
Script
Music/Soundtrack
Visuals
6.0
3.0
6.0
8.5
Suggestions
Can watch again
No
Good for kids
No
Good for dates
Yes
Wait to rent it
Yes
180 is a film that intends to be all philosophical and profound, but that is as cold as the steel-grey of the San Francisco skyline and as emotionally in-depth as an ad for fairness cream.

180 is basically a cinematographer's film, what with the lavish production values and the rich snazzy, well-shot frames throughout. Kasi, Hyderabad (or whichever city was used to pass off as Hyderabad) and San Francisco have been slickly captured, with enough moments to draw gasps of appreciation from the audience. However, an overdose of slow-motion frames, and the fact that audiences have paid to watch a film and not a slide show, mess things up for the makers.

Mano (Siddharth) has just landed in Hyderabad after paying respects to someone at Kasi, and plans to have no particular plans for the next 6 months. He rents a place to live in, plays with street kids every day, makes friends with every street hawker in sight, and helps out random people on the road. You know, the "living life for today, not caring about tomorrow" kind of thing.

A photo-journalist Vidya (Nithya Menon, who now stands a risk of her Miss Sunshine act becoming boringly repetitive) enters Mano's life, and is attracted to him. However, our man seems to have a mysterious flashback, which is revealed a while later.

We are taken back to the past in San Francisco, where Mano is actually AJ (Ajay, shortened), blissfully romancing and marrying the sprightly Renu (Priya Anand, trying to do a Genelia and coming nowhere close in terms of the charm).

AJ was diagnosed with terminal cancer - the cinematic form of cancer, in which nobody has messy and painful symptoms of disease of any sort, and there are no deadly chemotherapy/radiation sessions to deal with since this type of cancer "has no treatment".

AJ, who is a doctor himself, is unable to come to terms with his illness, and starts behaving like he has a terminal case of PMS, even as his harrowed wife tries to deal with his agony. AJ then takes some decisions, which alter everyone's life.

The wait for death is one of those themes that only a K Viswanath or a Mani Ratnam have been able to pull off with grace, taste and finesse. While it is insensitive to judge the actions of a person who'd just been told he has only 6 months to live, 180's depiction of distress is completely off the mark. It's not AJ's sulking that we have a problem with - heck, Nagarjuna's Prakash in Geetanjali sulked more - but the fact that it has been portrayed with a total lack of sensitivity or even a sense of realism. And AJ is not even in pain or a semblance of physical discomfort even 6 months after the earth-shattering news.

The entire film is ridden with king-sized logical potholes that the writers don't care about evading. Siddharth shares no chemistry with either of the leading women, and the romantic parts of the film are quite a drag anyway. The ridiculous ending doesn't just butcher whatever little romance the film had going for it - it also takes the cake as far as lack of sense is concerned. The dialogues aren't great shakes either.

Compounding 180's problems is a lead actor who is grossly, embarrassingly inadequate for the role. Still, Siddharth's Mano is probably better portrayed than AJ, who simply looks like a whiny escapist teenager. Nithya Menon does exactly what she did in her hit debut, only, in a role that wasn't even needed for the film. Priya Anand tries hard, but is the kind who is better off smiling in still frames advertising wedding sarees.

Another put-off is the fact that except for Tanikella Bharani and Sri Charan (who plays AJ's friend), no one in the cast speaks good Telugu or even has good diction. Imperfect voices have their charm only long as there are only about 1 or 2 of them in an entire movie - in this case, the movie doesn't even feel local.

The music is an attempt at a different kind of sound, but needs an overhaul of your taste to appreciate it. There's a whole song shot in extreme slow-motion and with an unconventional tune, which is an example of the over-enthusiastic, short-sighted creativity that is so much a part of 180.

ADVERTISEMENT
This page was tagged for
180 telugu movie
180 reviews
release date
Siddharth, Nithya Menon
theatres list
Follow @fullhyderabad
Follow fullhyd.com on
About Hyderabad
The Hyderabad Community
Improve fullhyd.com
More
Our Other Local Guides
Our other sites
© Copyright 1999-2009 LRR Technologies (Hyderabad), Pvt Ltd. All rights reserved. fullhyd, fullhyderabad, Welcome To The Neighbourhood are trademarks of LRR Technologies (Hyderabad) Pvt Ltd. The textual, graphic, audio and audiovisual material in this site is protected by copyright law. You may not copy, distribute, or use this material except as necessary for your personal, non-commercial use. Any trademarks are the properties of their respective owners. More on Hyderabad, India. Jobs in Hyderabad.