Some time ago, Panchatantram was essentially an anthology of 'five enthralling tales about animals'. Owing to 5tantram (the movie), Panchatantram is now an anthology of 'enthralling tales about five animals'. To cut a long story short, 5tantram is a happy-go-lucky sequel to the bygone sidesplitting riot "Sati-Leelavati", with a spanking new punch-line - "If you can pick your nose and you can pick your friends, why can't you pick your friends' noses?"

5tantram, as already mentioned, is a tale of five animals, which prefer to be referred to as the French Pandavas (Kamal, Jairam, Ramesh Arvind, Yuhi Sethu, Shriman). All's well till Ram (Kamal), the till-then King Casanova, gets married to an apprehensive and shy research assistant Mythili (Simran). Then begins the actual fun... there follow a series of hilarious confrontations between Ram and Mythili, all because of his past, ahem, 'experiences'. 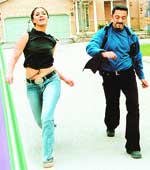 Finally fed up of Ram, Simran says, "How about we do it my way this time - you go take a hike and I go home?", and heads off to her father's place. Enter Margadavalli (Ramya Krishna), a call girl hired by Ram's friends to make him happy by... er, whatever. But Ram, determined to play the good guy, refuses to do it with her. What then follows is a mish-mashed jumble of confusing incidents, which is obviously followed by the reunion of Ram and Mythili.

Kamal emerges as the top dog of the movie owing to his gleaming performance. And lest I forget, he is the one who actually conceived the story as well! Simran, as one would have already expected, does just what she is extremely good at: acting nervous and apprehensive, as in her last comedy, Brahmachari. 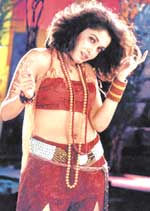 For a second time after Brahmachari, the couple (Kamal and Simran) put on display an extraordinary show of brilliant onscreen chemistry. Their tickled-pink confrontation in one particular scene (when Simran comes across Kamal in Devayani's apartment) had the audience almost rolling on the floor.

ADVERTISEMENT
This page was tagged for
Panchatantram telugu movie
Panchatantram reviews
release date
Kamal Hasan, Simran
theatres list
Follow @fullhyderabad
Follow fullhyd.com on
About Hyderabad
The Hyderabad Community
Improve fullhyd.com
More
Our Other Local Guides
Our other sites
© Copyright 1999-2009 LRR Technologies (Hyderabad), Pvt Ltd. All rights reserved. fullhyd, fullhyderabad, Welcome To The Neighbourhood are trademarks of LRR Technologies (Hyderabad) Pvt Ltd. The textual, graphic, audio and audiovisual material in this site is protected by copyright law. You may not copy, distribute, or use this material except as necessary for your personal, non-commercial use. Any trademarks are the properties of their respective owners. More on Hyderabad, India. Jobs in Hyderabad.