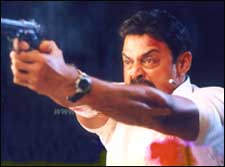 Mithun Verma / fullhyd.com
EDITOR RATING
6.0
Performances
Script
Music/Soundtrack
Visuals
NA
NA
NA
NA
Suggestions
Can watch again
NA
Good for kids
NA
Good for dates
NA
Wait for OTT
NA
The last time a movie called Gharshana was made, it set new standards in every department of filmmaking - direction, screenplay, music, editing and the calorifically-challenged actor in the lead role department. This Gharshana does almost the same, except in the last department. Instead of that, this has a originality-challenged storyline department.

In the middle of a serene lake, a lonely wooden cabin seems to be enjoying the soft waves splashing against it. The wild trees sway gently in the breeze, while the birds chirp their dawn melodies. CRASH! A man flies through the window of the cabin and crashes hard into the lake far below. As he drifts motionless at the bottom of the waterbody, we are introduced to Ram (Venky), the DCP, and now, a helpless victim.

As his thoughts wander aimlessly between the sane and the unconscious, they stop at a point where any man's thoughts would, if he were shot and thrown into the ocean - at the heroine's young body. Then comes that song - Cheliya Cheliya - the best part of the movie.

The purpose of placing the best part of the movie right at the beginning would be? It would be that if you hate the rest of the movie, you can walk out and save yourself a lot of precious time. Moreover, the management can also save a lot in overhead costs by shutting down the show after just 5 minutes. Nice production trick, this.

That's only in the worst case scenario. And worst case scenario is what Venky finds himself in at this moment. Lying at the bottom of a lake with bullet wounds is a serious issue. More serious than the fact that he could fantasize about the heroine even at that moment. Only if she was there. He would... Alright! Enough already! Ahem, so he realises he needs to swim to the shore before the flashback hits us.

Ram is an extremely efficient police officer. His policy is simple - if someone is bothering the city, twist your newly grown moustache. If someone is bothering HIS city, say hello to his automatic gun. In one such encounter, Ram kills a real badass. As Ram empties his gun into the already bullet-riddled corpse, the badass's bro, badass number 2, (and now number 1, since 1 is dead), vows vengeance.

This badass is obviously a psycho, a sadist, a serial killer, a rapist and an arsonist. The management is extremely sorry if it has missed any other type of crime that the villain has committed. After his biggest crime, namely, overacting, any other crime just refused to register. Our badass likes vengeance the kinky way - torture the soul of the victim. In this case, the heroine (Asin).

Ram is in love with her despite all his efforts. Thank the lovely introductory song for that! On top of that, the hero has seen too many superhero movies not to know that a girlfriend will always be the soft underbelly of the superhero. Therefore, he marries her, so that she wouldn't be just a girlfriend. But somehow, the badass doesn't understand this logic, and kidnaps her anyway. And we all know how all this is going to end.

What the movie lacks in the storyline, it makes up with the style. Each and every frame of the film has been well thought out, with accentuation to the camera angles and lighting, and some real slick editing. A music video feel underlines the whole movie. A well-made video music video, that is.

The action fans will love this movie. The encounters are sadistically gory. Especially the romantic encounters between Asin and Venky. They make you want to slit their guts! There are standards for boring too, you know! It drags. And that forms half of the movie.

Finally, watch the flick for sexy-looking Venky, the action and the music. Watch this for everything else, as well if your taste is really bad.
Share. Save. Connect.
Tweet
GHARSHANA SNAPSHOT

See Gharshana full details
GHARSHANA USER REVIEWS
1 - 6 OF 6 COMMENTS
POSITIVE  |  NEGATIVE |  NEWEST  |  OLDEST  |  MOST HELPFUL  |  LEAST HELPFUL
USER RATING
8.6
241 USERS
Performances
Script
Music/Soundtrack
Visuals
NA
NA
NA
NA
Can watch again - NA
Good for kids - NA
Good for dates - NA
Wait for OTT - NA
praveenkumar3456@gmail.com on 12th Nov 2021, 10:04pm | Permalink
after the fight between police and salim(panda) gang,salim(panda) gang kidnapped daniel balaji(srikanth) family. that incident is not shown in depth in this telugu movie gharshana. that incident must show in detail in this movie,because kidnapping police family is not an easy task. the director should avoid that mistake as per my opinion because venkatesh(ramachandra) is the powerful police in this movie who can catch any weakness of rowdy gang,that is panda gang.
Dhanarm_swamy Jayamangala on 9th Apr 2007, 9:14pm | Permalink
heave a nisemove
RATING
6
Chaitanya Psr on 18th Sep 2004, 11:46pm | Permalink
only one comment:

THE MUSIC SIMPLY ROCKS. u can watch the film only 4 the music given the standard of telugu films today.

RATING
6
Satish Patnayakuni on 24th Aug 2004, 12:48pm | Permalink
movie wud have been better if it is cut short by half an hour. Scenes between venky and asin are too good. Direction and muisc are good.
RATING
8
Rabbithole Ra on 1st Aug 2004, 7:12am | Permalink
havent seen d movie

ADVERTISEMENT
This page was tagged for
Gharshana telugu movie
Gharshana reviews
release date
Venkatesh, Asin
theatres list
Follow @fullhyderabad
Follow fullhyd.com on
About Hyderabad
The Hyderabad Community
Improve fullhyd.com
More
Our Other Local Guides
Our other sites
© Copyright 1999-2009 LRR Technologies (Hyderabad), Pvt Ltd. All rights reserved. fullhyd, fullhyderabad, Welcome To The Neighbourhood are trademarks of LRR Technologies (Hyderabad) Pvt Ltd. The textual, graphic, audio and audiovisual material in this site is protected by copyright law. You may not copy, distribute, or use this material except as necessary for your personal, non-commercial use. Any trademarks are the properties of their respective owners. More on Hyderabad, India. Jobs in Hyderabad.