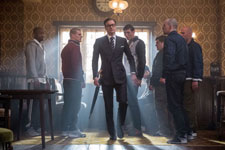 T J Reddy / fullhyd.com
EDITOR RATING
5.0
Performances
Script
Music/Soundtrack
Visuals
7.0
3.0
6.0
8.0
Suggestions
Can watch again
No
Good for kids
No
Good for dates
Yes
Wait for OTT
Yes
If I were to be playing word associations, the one term I'd closely associate with Kingsman: The Secret Service would be "joy". The sense of elation you feel through its generous 129-minute runtime is second to none as the send-ups to spy movies past and present, the dialogue bordering on pastiche, the slick production values and the genuinely likeable duo of mentor Harry Hart (Colin Firth) and mentee Eggsy (Taron Egerton) make for a movie whose quality no one could have foreseen but all need to bow their heads down to with respect. Because, simply put, Manners Maketh Man, and when one man, director Matthew Vaughn, showcases his skills at their absolute zenith, it is but you showing your manners when you acknowledge his work.

So breaking the cycle of not directing the sequels to the awesome popcorn action movies he makes - look at the sequels to X Men: First Class and Kick-Ass not matching up to their predecessors - Matthew Vaughn returns to helm Kingsman: The Golden Circle. Will it match the unabashed and unrelenting rollicking ride the first one was or will it suffer the disease of Sequelitis?

To adequately answer that question, we must start at the beginning. Eggsy and Merlin spring into action with the base of Kingsman destroyed and every agent on their books terminated. While the two of them survive due to a twist of fate, the realisation dawns on them that they are in no way capable of stopping the evil, '50s loving, drug kingpin Poppy Adams. But unbeknown to them, the elders at that adorable tailor shop left breadcrumbs (whisky bottles, in this case) to follow in time of such peril. By drinking those drops of elixir and following the trail they leaves behind, Eggsy and Merlin meet the secret service across the pond, The Statesman, and quickly form an alliance to eliminate a deadly virus permeating narcotic drugs across the world and the woman masterminding said global catastrophe.

While the plot itself is adequately James Bond to warrant a fun romp, Kingsman: The Golden Circle ties itself in knots with its admittedly cool electric lasso while trying to do both what a sequel and a universe-building cinematic exercise should. The movie doubles down on the novel aspects of its original by overdoing the crass humour, and having multiple iterations of fight scenes reminiscent of that one sequence from The Pseudo Westboro Baptist Church and a slew of overpowered gadgets that skirt the line of silliness, but the cruel thing about novelty is that, like the element of surprise the original carried with it, it only works once.

To offset this, however, the film stuffs itself with a new band and new brand of heroism. Gone are the days of over-the-top British elegance because the film welcomes their substitute, over-the-top American tomfoolery. From slurring southern words emanating from the mouth of The Dude (Jeff Bridges) to ill-advised social commentary addressing every issue under the sun ranging from The Donald's ineptitude at holding the office of The President to the seemingly incessant need Americans have to be rich and famous, the film goes through sub-plots for breakfast, lunch and dinner as it reaffirms the popular belief that everything is big in America and that includes the bloat on the cinematic stories being told.

The one welcome part of this needlessly extensive parade of cinematic muscle is the film's cast. Everyone from the princess who was literally the butt of a joke in the first film, pseudo-Q Mark Strong and the dynamic lead duo are in top form as they hop from country to country gruesomely hunting down bad guys with consummate ease and requisite inanity. Their American counterparts don't lag far behind either as even with their limited screentime and unclear origins and operations, they manage to add a unique southern, home-grown flavour to their actions. The film alludes to a new guard taking over at the Kingsman's home base in its final scene, and I for one am quite intrigued to see men and women named after alcohol fight other product-endorsing villains.

Akin to the cast, the movie's flawlessly composed gentleman's theme is a thing of beauty. The dignity that piece of music carries with it when coupled with shots that flow like the finest of wine make for viewing that is easy on the eye even if most of what you view is a needless cycle from A to Z to A again.

Like the Bond films it apes, Kingsman starts strong by embracing a ludicrous premise and its charming new leading man a la Golden Eye or Casino Royale. But just like the Bond films before it, Kingsman can attest to the fact that creating a wholly enjoyable yet non-derivative sequel to a beloved spy film (be it pastiche or serious) is a task marred by landmines galore. Each step along the treacherous path needs to be placed with utmost caution because lush landscapes and effable casts are great motivators to make a film but a few steps in the wrong direction leave an explosion of undercooked sub-plots, extended runtimes and unthreatening villains that the movie might not recover from.

Bigger, of course, does not always mean better. 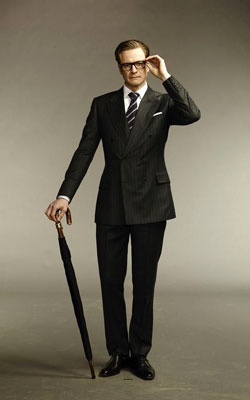 ADVERTISEMENT
This page was tagged for
Kingsman: The Golden Circle movie watch online hindi
golden circle full movie download in hindi
kingsman free download in hindi
kingsman 3 full movie in hindi download
downllad kingsman the golden circle in hindi
Follow @fullhyderabad
Follow fullhyd.com on
About Hyderabad
The Hyderabad Community
Improve fullhyd.com
More
Our Other Local Guides
Our other sites
© Copyright 1999-2009 LRR Technologies (Hyderabad), Pvt Ltd. All rights reserved. fullhyd, fullhyderabad, Welcome To The Neighbourhood are trademarks of LRR Technologies (Hyderabad) Pvt Ltd. The textual, graphic, audio and audiovisual material in this site is protected by copyright law. You may not copy, distribute, or use this material except as necessary for your personal, non-commercial use. Any trademarks are the properties of their respective owners. More on Hyderabad, India. Jobs in Hyderabad.