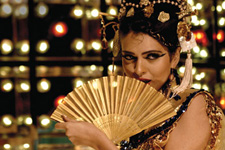 Swayamsrestha Kar / fullhyd.com
EDITOR RATING
7.5
Performances
Script
Music/Soundtrack
Visuals
7.0
7.0
8.0
8.0
Suggestions
Can watch again
Yes
Good for kids
No
Good for dates
No
Wait for OTT
No
There is something deeply unsettling about Miss Lovely. And it's not the chilling depiction of a cinematic sub-culture that caters to the most perverse of human desires. Neither is it the opening sequence which invokes memories of nightmares that had once plagued almost everyone who had been (willingly or otherwise) subjected to Aahat when they were kids. The film will leave you disoriented for a different reason altogether. Allow us to elaborate.

In film studies jargon, the content within one frame or scene of a movie is called "Mise-en-scene". The sequencing of these frames in order to form a cinematic narrative is what we call "editing", and what the French refer to as "montage".

In Miss Lovely, the Mise-en-scene is replete with close-ups of individual actors, especially when they are being spoken to, instead of when they are actually talking themselves. The camera seems to be lurking through the scenes like a stealthy voyeur. Often, the surrounding sounds seem muffled, reminiscent of clandestine conversations that are not meant to be heard. The rooms in which the scenes take place are small, derelict and suffocative.

The resultant effect is equivalent to looking through the keyhole of a door and seeing something quite disturbing on the other side - this particular action being one of the most dominant and recurring images in the film. The film leaves you with a feeling that you are being unwittingly made to participate in something forbidden, or maybe something fundamentally wrong. It's an experience that leaves you with a faint inkling of shame - shame without palpable guilt.

The film, through sheer radical structuring of content and technique, succeeds in both alienating the audience by not allowing them to be involved in the mise-en-scene - choppy camera swings and unpredictable montage arrangement ensure that you never get comfortable within the narrative space of the film - while at the same time, managing to smear a little of its subject matter's inherent slime on our psyches and moral dispositions.

Now, that is unsettling.

Sonu Duggal (Nawazuddin Siddique) and Vicky Duggal (Anil George) make C-grade sex-horror films in the 80s. While Vicky is a lecherous greedy bastard, younger brother Sonu resents the dirty way in which he earns his livelihood, and dreams of making a clean romantic movie some day. He is constantly bullied by the elder brother, Vicky, into sourcing young girls who are both beautiful and shameless (as one producer emphasises) for these films.

When Sonu meets Pinky (Niharika Singh), he is immediately drawn to her, and convinces her that he will make her a star. But, of course, the romance is doomed. You know it instinctively from everything else that has transpired before. This is not a film that will allow you to unburden the stress of everyday life and come out lighter.

One of the most memorable moments in the movie is when an eerily silent mob is watching a handful of people, caught while shooting a "blue film", being herded into a police van. Comprised largely of men, the gathering reminds you of earlier crowds which had hooted and cheered when skimpily clad women were writhing around on the screens of seedy dimly-lit cinema halls. In both the situations, the men had been spectators. Only, in the former scene, they seemed as culpable as the supposed perpetrators of the "crime", since, in this case (sex-horror and pornographic films), the enthusiastic spectator is an indulger and, consequently, a perpetrator as well.

Ashim Ahulwahlia, who had earlier tried to make a documentary on the people who used to work in the C-grade film industry, experiments with genres, techniques and content to create a film that admirers of the craft of film-making will especially approve of (this reviewer spent a lot of time trying to count the different types of montage techniques that have been used in the film). While the first half starts off splendidly and keeps gaining momentum in terms of development of subject matter and establishment of characters, the second half dilutes the effect somewhat. Some of the sequences do seem forced, and render the narrative opaque (or needlessly ambiguous) at certain points.

The film's soundtrack, which features rarely heard compositions by Italian musicians like Eggisto Macchi and Piero Umiliani, is beautifully incorporated. This is Ahluwahlia's film, through and through, as is evident from the fact that he was involved in the editing as well as mixing the soundtrack for the movie. The cinematography, at times, is remarkably like the kind we have seen in films in Chungking Express. Needless to say, all of it works very well.

Nawazuddin Siddique plays his part with a level of of masterful control and cinematic erudition that is gratifying to behold. It is a nuanced portrayal, and the culmination of Sonu's journey is a spectacular one that his story richly deserves.

Anil George endows Vicky with a rat-like demeanour, and in doing so, puts in a very believable performance. Niharika Singh puts in an astoundingly mature performance as the enigmatic Pinky.

Watching Miss Lovely is hard work. Not because it is bad. But because it is rather good, and in a very different way than what we are accustomed to. Bring your thinking caps. Leave the popcorn out of this.
Share. Save. Connect.
Tweet
MISS LOVELY SNAPSHOT 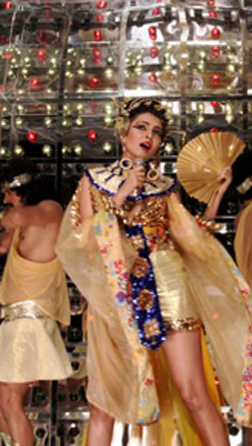 ADVERTISEMENT
This page was tagged for
miss lovely movie
Miss Lovely hindi movie
Miss Lovely reviews
release date
Nawazuddin Siddiqui, Niharika Singh
Follow @fullhyderabad
Follow fullhyd.com on
About Hyderabad
The Hyderabad Community
Improve fullhyd.com
More
Our Other Local Guides
Our other sites
© Copyright 1999-2009 LRR Technologies (Hyderabad), Pvt Ltd. All rights reserved. fullhyd, fullhyderabad, Welcome To The Neighbourhood are trademarks of LRR Technologies (Hyderabad) Pvt Ltd. The textual, graphic, audio and audiovisual material in this site is protected by copyright law. You may not copy, distribute, or use this material except as necessary for your personal, non-commercial use. Any trademarks are the properties of their respective owners. More on Hyderabad, India. Jobs in Hyderabad.