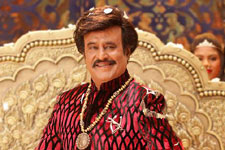 Ravi Kandala / fullhyd.com
EDITOR RATING
5.0
Performances
Script
Music/Soundtrack
Visuals
8.0
5.0
4.0
8.0
Suggestions
Can watch again
No
Good for kids
No
Good for dates
No
Wait for OTT
No
While we at fullhyd.com do write reviews for movies, it is another thing to review phenomena. And that is what a Rajinikanth movie is - a phenomenon. The facts that this is a Rajini release after a 4-year hiatus, and that it has released on the star's 64th birthday, served to double expectations. And in the face of such high expectations, even the toughest crumble.

Yes, alas, even the mightiest of them all fails to stand tall. Lingaa is an attempt to make a blockbuster by putting in every Rajini cliché there is/was, while also sending out a social message and also adding two pretty heroines and also showing some patriotism on the star's part and also making him denounce casteism while satisfying the masses by making the star do death- (and gravity- and logic-) defying stunts. To ensure that all the above are crammed into the movie, director K S Ravi Kumar ends up making a 3-hour-long feature which ultimately fails to engage.

Lingaa is about Lingeswar (Rajinikanth), a petty thief who is invited by a TV journalist Swetha (Anushka) to come to her village to open a long-closed temple. The legend is that the temple was built by Lingaa's grandfather Raja Lingeswar and was closed due to some issue. The villagers believe that getting the temple opened by the heir of the Raja will save the village from certain doom.

Lingaa first refuses to go to the village, but after being implicated in a theft, decides to hide there. What he discovers in the village and how he helps the villagers in times of peril forms the remaining film.

The biggest problem with Lingaa is that it is not a Rajini movie. By that we mean it is not the standard cigarette-tossing, punchline-throwing Rajini that you see in the movie. For two-thirds of its running time, Lingaa runs in the pre-independence era, and features a Rajini who's a dignified Raja striving for the welfare of his people. The social drama around the construction of the dam in these parts takes forever to end.

Several other scenes too play out for much longer than intended. For example, a robbery scene in the first half runs for well over a half-hour, and gets tiring by the time it reaches its conclusion. And the stunts in the end look slightly ridiculous (yes, even for Rajini). The songs are shot in stunning sets, but the music by A R Rahman is weak.

The only aspect of Lingaa that stands out is the star himself. Rajini shoulders the entire film, and makes you laugh, cry and feel for him. Anushka, Sonakshi and everyone else play fillers, and are their usually reliable selves.

The film looks brilliant, and the sets and technical values are all top-notch. The money spent on the movie shows on the screen, and if Lingaa were an attempt to compensate the buyers of Kochadaiyaan, we don't see how that is going to happen.

Lingaa, then, is for hardcore fans of the superstar. For others, it is a long social-drama that fails to excite or engage.
Share. Save. Connect.
Tweet
LINGAA SNAPSHOT 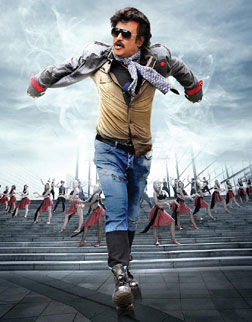 I am neither agreeing nor disagreeing with the reviewer's views - I haven't seen the film or heard the music. But your post was irrational enough in its condescension to make me want to post.

And the writer's fault appears to be that he dared call "Rahman's music" weak. It perhaps would have been okay if the same music had been composed by someone else, was what your argument sounded like - it was not the music but its composer. (And I am not sure what you meant by "people like you".)

If I were a writer for a publication whose readers want to know whether they will like a movie and should spend their money on it, my job would be to tell them that - whether the majority of them are likely to enjoy the production. And people decide whether to continue reading that publication (or website in this case) depending on the consistency in the accuracy of the suggestions.

Also, I did some quick looking around to see if you did have a point, and here are some links I found:

That's the TOI review, which doesn't mention Sonakshi's performance (or the music).

That's the NDTV review, which says "Music by AR Rahman is not really soul-stirring". It doesn't mention Sonakshi's performance, either.

That is the rediff review, which says, "...of the five songs in the film, only one, Indianey Vaa, had the anthem potential, the others being just about fine. But even where the songs didn
MovieLover on 15th Dec 2014, 11:26pm | Permalink
With all due respect to your personal opinion, Mr. Ravi, people like you and me are not qualified enough to judge A R Rahman's music. It was highly immature on your part to consider yourself qualified for it. If you can find at least one song in the entire history of Indian music, not by Rahman, that is of the quality of Mona Mona or Satyam Sivam, please do let us know.
The moment you termed Rahman's music 'Weak' and you found Sonakshi's performance not worth a mention, I lost any respect I had for your review. And no..i am not a Rajni hardcore fan..

A suggestion to Fullhyd admin team: You should definitely check reviews from reviewers before publishing them..else you would lose whatever followers you have soon..
Saradhi on 18th Dec 2014, 1:05pm | Permalink
Dear Mr. Movie Lover, It seems that your knowledge about music is immature. If you think Mona Mona or Satyam Sivam as great songs, I doubt whether you know about the songs such "virinchini virachinchithini" sirivennela, takita tadhimi of sagara sangamam, omkara nadanusandhana of sankarabharanam, ye divilo virisina parijathamo of kanne vayasu, brundavanamadi andaridi of missamma, like that so many songs which we humm even when we sleep. Tell me one single song of Rehman which can match that category and people humm. You may like Rehman's music that is up to you. I don't think we can compare with him all time great music directors. So please don't generalize the statements. Personally I do not like Rehman's music. Initially I thought he is good, but when he murdered the Vandematharam song, I have lost total respect.
LEAVE A COMMENT
fullhyd.com has 700,000+ monthly visits. Tell Hyderabad what you feel about Lingaa!
MORE MOVIES
Latest Reviews
Jayeshbhai Jordaar
Sarkaru Vaari Paata
Doctor Strange In The Multiv...
Ashoka Vanamlo Arjuna Kalyan...
Runway 34
more
Heropanti 2
Acharya
Kanmani Rambo Khatija
Jersey (Hindi)
K.G.F. Chapter 2
Beast (Telugu)
Ghani
Fantastic Beasts: The Secret...
The Contractor
The Lost City
Contemporary Reviews
Badlapur Boys
The Hobbit: The Battle Of Th...
Lingaa (Tamil)
PK (Peekay)
Chandrakala
more
Mukunda
Chinnadana Nee Kosam
Exodus: Gods And Kings (Hind...
Exodus: Gods And Kings
Exodus: Gods And Kings (3D)
Bhopal: A Prayer For Rain
Action Jackson
Undile Manchi Kalam Mundu Mu...
The End
Random Reviews
Gorgeous (English)
The Warrior
Shiva
Confidence
Sri Ramadasu
more
Raja Babu
Shock
Cheenti Cheenti Bang Bang
Adurs
2011 World Invasion: Battle ...
Ghost Rider - Spirit Of Veng...
Eye In The Sky
Kingsman: The Golden Circle
Shazam!
The Contractor
SEARCH MOVIES
Dissatisfied with the results? Report a problem or error, or add a listing.
ADVERTISEMENT
SHOUTBOX!
{{todo.name}}
{{todo.date}}
[
ip{{todo.ip}}
]
{{ todo.summary }}... expand »
{{ todo.text }} « collapse
First  |  Prev  |   1   2  3  {{current_page-1}}  {{current_page}}  {{current_page+1}}  {{last_page-2}}  {{last_page-1}}  {{last_page}}   |  Next  |  Last
{{todos[0].name}}

ADVERTISEMENT
This page was tagged for
lingaa telugu movie release date
Lingaa telugu movie
Lingaa reviews
release date
Rajinikanth, Anushka Shetty
Follow @fullhyderabad
Follow fullhyd.com on
About Hyderabad
The Hyderabad Community
Improve fullhyd.com
More
Our Other Local Guides
Our other sites
© Copyright 1999-2009 LRR Technologies (Hyderabad), Pvt Ltd. All rights reserved. fullhyd, fullhyderabad, Welcome To The Neighbourhood are trademarks of LRR Technologies (Hyderabad) Pvt Ltd. The textual, graphic, audio and audiovisual material in this site is protected by copyright law. You may not copy, distribute, or use this material except as necessary for your personal, non-commercial use. Any trademarks are the properties of their respective owners. More on Hyderabad, India. Jobs in Hyderabad.