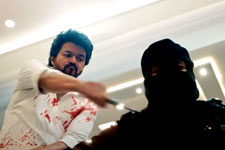 Vijay is a mammoth star who has evolved in his last few films. With outings like Mersal, Bigil and Master, Vijay managed to find a sweet spot where his mass image and eloquent storytelling coalesced comfortably.

However, if you were to watch this film with the after-taste of recent Vijay films, you'd be disappointed with the rather bland dish you are served.

Veera Raghavan (Vijay) is an ex-RAW agent fighting depression after he unintentionally causes collateral damage while fighting terrorists. The movie then cuts to Veera Raghavan, his love interest Preethi (Pooja Hegde), his comic boss (VTV Ganesh) and a slew of entertaining characters (including Yogi Babu and Redin Kingsley) finding themselves in the middle of a hostage situation in a mall. How Veera manages to outsmart the terrorists and save the hostages makes the rest of the movie.

Many cinephiles have a grievance that Vijay barely expresses. That he does not display much of a range in his films. Surprisingly, it works with audiences. Big budget films with big stars are not dependent on the acting range but mainly on the personality of the star. It's the same with Beast. Films of demi-gods like Vijay are not to be sneered at for lacking in cinematic excellence unless they're dull.

Unfirtunately, Beast is precisely that. It's dull, underwhelming, low-stakes and conveniently forgettable.

You cannot help but remember another spy thriller from Vijay, Thupaki (2012). It had a similar backdrop - of Vijay versus terrorists - but that film had meat. The stakes were high, the villain was frightening, and Vijay's stoicism worked magic for the tight, devilish character of the intelligence officer. In that movie, the fans enjoyed the elevation of the star, the audiences enjoyed the thrilling story, and the critics lauded the attempt. But Beast feels like the long-lost step-brother of Thupaki who doesn't have a greater purpose.

Nelson Dilipkumar made a striking impression with his first two films, Doctor and Kolamavu Kokila, for their slick, witty writing and glorious tonal shifts. But this time, Nelson sacrifices his trump card for the Thalapathy card. There is no detailed world-building, dark-comedic writing or any nexus for the crime that happens. In Kolamavu Kokila the drug lords were brutal, and in Doctor the human traffickers ran chills up your spine, but the terrorists in Beast wouldn't scare even a kindergartener.

Even the comedy barely lands. VTV Ganesh does an impressive job with his timing and witty one-liners, but the rest of the cast, and especially Yogi Babu, feels under-utilised. In both of Nelson's previous films, Yogi Babu took the cake. His deliciously humorous reactions to dangerous twists/turns in the plot made the crowds burst into laughter. It's almost painful to admit that a rib-tickling talent like Yogi Babu is unfathomably wasted in this one.

Pooja Hegde, who proved her acting chops with recent hits like Most Eligible Bachelor, must have done something in this film. Let's see - oh yes, she danced to a few peppy numbers. A pleasant surprise is however the presence of maestro Selvaraghavan. One wonders what prompted him to act, for the first time, in an out-and-out commercial film. Nevertheless, he delivers an off-beat, delightful hostage negotiator.

In the music department, Anirudh undoubtedly scores additional brownie points this time. It's not just that he delivers good mass music, he always over-delivers. He goes beyond what is expected of him. If you give it a thought, he could have simply blown a few trumpets in the background for the hero and called it a day. No sir, no! He had to experiment with an immensely groovy Arabic Kuthu, and the fun Caribbean jingle Jolly O Gymkhana. The soundtrack of today's masala movie doesn't have any right to be experimental, but it's Anirudh. And he deserves both the laurels and the audience love.

What stands out in the film, though, is the bold decision of making the protagonist face the consequence of war. It pushes him to depression and makes him quit his job. It may not have been executed in the finest cinematic way, but the scene had its heart in the right place. It humanises him for a minute and gives you faith that Vijay's typical mass hero is evolving with each film.

Overall, Beast is a family multiplex entertainer that does its job, somewhat. But the ones who wanted a memorable Vijay film or a slick Nelson thriller will be disappointed with this much-awaited combination.
Share. Save. Connect.
Tweet
BEAST (TELUGU) SNAPSHOT 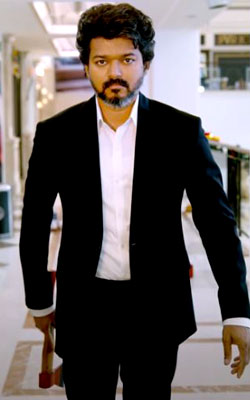 ADVERTISEMENT
This page was tagged for
Beast (Telugu) telugu movie
Beast (Telugu) reviews
release date
Vijay, Pooja Hegde
theatres list
Follow @fullhyderabad
Follow fullhyd.com on
About Hyderabad
The Hyderabad Community
Improve fullhyd.com
More
Our Other Local Guides
Our other sites
© Copyright 1999-2009 LRR Technologies (Hyderabad), Pvt Ltd. All rights reserved. fullhyd, fullhyderabad, Welcome To The Neighbourhood are trademarks of LRR Technologies (Hyderabad) Pvt Ltd. The textual, graphic, audio and audiovisual material in this site is protected by copyright law. You may not copy, distribute, or use this material except as necessary for your personal, non-commercial use. Any trademarks are the properties of their respective owners. More on Hyderabad, India. Jobs in Hyderabad.