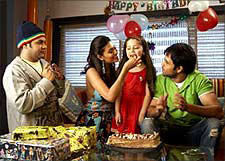 Ravi Mundoli / fullhyd.com
EDITOR RATING
3.0
Performances
Script
Music/Soundtrack
Visuals
NA
NA
NA
NA
Suggestions
Can watch again
NA
Good for kids
NA
Good for dates
NA
Wait for OTT
NA
The Train poses several fundamental questions. Whether Emraan Hashmi is an anagram of Himesh Reshammiya is one of them. Whether his leading ladies really want to lock lips with him is another. Going by what appears to be distinct reluctance in a couple of scenes, the answer to the latter appears to be "No".

Unwittingly, one of the characters in The Train spells out the best way to make such movies sell: "bikna hai to bikini chahiye". Perhaps if those sage words had been listened to, The Train would've been a lot easier on the eye. As it stands, one has to sit through the ordeal of watching Hashmi, Bhagat, Basra and Merchant going through the motions.

Vishal (Hashmi) is a Bangkok advertising executive. We know this because while everyone else in the office wears business suits, Vishal only wears flowery shirts and grungy trousers. His wife Anjali (Bhagat) is a hotshot businesswoman, who likes to go to work in incredibly short skirts. They have a daughter who is seriously ill and is waiting for a kidney transplant.

The marriage is on the rocks for reasons that aren't exactly apparent. The suggestion is that it's the kid's illness that is the root cause, but the real reason of course is that this allows Vishal to run into Roma (Geeta Basra). Roma is a hotshot businesswoman, who likes to go to work in short skirts.

It should now be plain as day that the overarching theme of the movies is short skirts. Vishal and Roma get cozier and cozier, to the accompaniment of the musical score, which just about rescues The Train from complete oblivion.

Just as Vishal and Roma are about to do the unthinkable (yeah, right), a hoodlum barges in and discovers Vishal's identity. Tony (Aseem Merchant) starts calling Vishal at home and harassing him, mostly by saying "Hi buddy" into the phone in increasingly annoying ways, and demanding exponentially increasing amounts of money.

To be fair, the basic plot is interesting enough to keep you engaged. Maybe this is because approximately 6 million movies have been made before with the same idea, and everyone has it down pat. One suspects that with a cast that could really act, and with a setting that isn't as exotic as Bangkok, a decent thriller could've resulted.

To continue being fair, we should single out Mithoon's music (and to some extent Sayeed Qadri's lyrics) for special mention. The Train will remain in our consciousness long after it has exited theaters because "Woh Ajnabee" and "Mausam" will linger on in remixes and "best of" avatars for some time.

The recipe for the Hashmi movie is close to perfection. 1 nos. brooding Hashmi, 2 nos. reluctant lip-lockers, a generous sprinkling of skin, a dollop of adultery, a pinch of blackmail, a smidgen of murder and what have you. One wonders who watches them, but it appears that he is headed in the direction of Mithunda who carved his own niche market.
Share. Save. Connect.
Tweet
THE TRAIN SNAPSHOT

ADVERTISEMENT
This page was tagged for
The Train hindi movie
The Train reviews
release date
Emraan Hashmi, Sayali Bhagat
theatres list
Follow @fullhyderabad
Follow fullhyd.com on
About Hyderabad
The Hyderabad Community
Improve fullhyd.com
More
Our Other Local Guides
Our other sites
© Copyright 1999-2009 LRR Technologies (Hyderabad), Pvt Ltd. All rights reserved. fullhyd, fullhyderabad, Welcome To The Neighbourhood are trademarks of LRR Technologies (Hyderabad) Pvt Ltd. The textual, graphic, audio and audiovisual material in this site is protected by copyright law. You may not copy, distribute, or use this material except as necessary for your personal, non-commercial use. Any trademarks are the properties of their respective owners. More on Hyderabad, India. Jobs in Hyderabad.