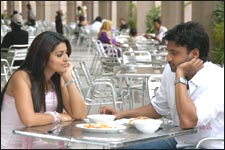 EDITOR RATING
5.0
Performances
Script
Music/Soundtrack
Visuals
NA
NA
NA
NA
Suggestions
Can watch again
NA
Good for kids
NA
Good for dates
NA
Wait for OTT
NA
There are 3 kinds of good romances. Or maybe 4. Or even 5, if you include even Jurassic Park. It doesn't really matter - Madhumasam doesn't fall into any of them. It is almost a Mannem Sarada / Yuddhanapudi Sulochana Rani kind of novel disguised as a movie. Those ambling novels for housewives in the 70s and 80s that were a slice of life of ordinary people rather than page-turners or commercial blockbusters.

That way, it's hard to call Madhumasam a bad film. It's just about who it will appeal to. None of the big stars of Tollywood will give you pure romances, and so the expensive talented crews - screenplay and dialogue writers - are usually priced out of that market, especially after even Uday Kiran and Tarun lost their footing. The romances that come out then are almost always B-grade, with an odd Bommarillu every alternate epoch. Given a complete lack of supply, then, Madhumasam just might appear more half-full to you than half-empty, since it at least has known names and decent presentation.

Sanjay (Sumanth) is a macho but loutish young executive who runs into Hamsavahini (Sneha) at a marriage. Both of them are aggravatingly template products - Sanjay doesn't believe in love, and Hamsa, a homely Telugu girl, swears by it.

Hamsa falls in love with Sanjay when she sees that he is quite helpful in general and when he saves her from goons, but cannot interest him since he is unreasonably rude to her. She finally bites the bullet and just proposes marriage to him, and quite surprisingly, he accepts.

On the day of engagement, however, he tells her that he's accepted her proposal simply because he has to marry someone and since she's good-looking and decent, and not since he loves her. This completely disappoints Hamsa who wants a husband who really loves her, since her sister had a bad marriage. She just calls the engagement off.

An incident later where Hamsa risks her safety to help Sanjay and his disputably close friend Maya (Parvati Melton) who get in jail on some souped-up charges, makes Sanjay fall in love with her. But Hamsa is completely disillusioned with love now, and is no longer interested in him.

The nagging problem you might have with Madhumasam is that it is not fast, peppy or innovative enough. The second half is particularly dour. The film looks more like a romance for people on the wrong side of 30 rather than the ones it should have been meant for - the college-goers and 20-somethings. Then, there are no great lines, the comedy is mostly average - Venu Madhav is particularly wasted - and there's not enough color and vivacity.

The screenplay itself doesn't have too many heart-tugging moments. Make that any. Perhaps it was meant to be that way, but then it will attract audiences who like that kind of stuff - and they're not in large numbers.

Sumanth is in his niche - tuned appropriately closer to class than mass. Sneha can perform, but she is not gorgeous enough to make you lend your own urgency to the romance where the screenplay fails. Parvati Melton is, but no one's romancing her on screen. There's then a clash of interests. All the women want Sumanth to marry Sneha. The men are not thinking about marriage - they're thinking about how nuts Sumanth is.

All performances are decent, though, for once, Venu Madhav doesn't impress. It's more the writing than him. Parvati Melton has more footage on the ads than in the actual movie - she is more a vamp, and almost irrelevant. The music, by Mani Sharma, serves more as a fag break and a time to return calls.

Madhumasam is still a clean entertainer, and worth a watch if you like some mush with your popcorn.

May be you can choose this as a relief from gory films like Desamuduru or Yogi... but the movie is no great entertainer.

ADVERTISEMENT
This page was tagged for
sneha madhumasam
madhumasam movie review
Madhumasam telugu movie
Madhumasam reviews
release date
Follow @fullhyderabad
Follow fullhyd.com on
About Hyderabad
The Hyderabad Community
Improve fullhyd.com
More
Our Other Local Guides
Our other sites
© Copyright 1999-2009 LRR Technologies (Hyderabad), Pvt Ltd. All rights reserved. fullhyd, fullhyderabad, Welcome To The Neighbourhood are trademarks of LRR Technologies (Hyderabad) Pvt Ltd. The textual, graphic, audio and audiovisual material in this site is protected by copyright law. You may not copy, distribute, or use this material except as necessary for your personal, non-commercial use. Any trademarks are the properties of their respective owners. More on Hyderabad, India. Jobs in Hyderabad.