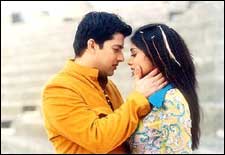 Kashif Ali / fullhyd.com
EDITOR RATING
6.0
Performances
Script
Music/Soundtrack
Visuals
NA
NA
NA
NA
Suggestions
Can watch again
NA
Good for kids
NA
Good for dates
NA
Wait to rent it
NA
Jindal (Anupam Kher) is a tycoon who parks his limousine in the handicapped-parking zone of the parking lot. He also talks to his authentic British staff in Hindi and they in turn, reply in English. But then there's nothing new about this. The British have always been know to reply in English even though our directors generally frown upon it.

Now his dilemma is that he has two daughters. No wait, that's our dilemma. One, we can always ignore and throw things at. What of the other one then? Can be rather hard to throw things at her when she's as alluring and vacuous in her acting as Sanam (Shriya Saran). She's absolutely amazing at trying very hard to act and equally enchanting at failing to do so.

She's also a big believer in magic and a little box tells her that her future love will play a guitar. These boxes are notorious for their ability to predict exactly what the script asked for. And lo behold… someone plays a little tune outside her window.

Enter Ricky (Aftab Shivdasani), who can play the guitar by moving his finger over the fret board without strumming the chords. He's incredibly talented and ridiculously cheesy like that. Noticing an empty hat on the street he takes the guitar from some blind dude and starts playing. People flock to him like he was the second coming of Hendrix. Sanam hears, searches and misses him by a few extras that come in the way. Right then she knows that this is the guy the box was talking about.

Mr. Jindal, on the other hand, is being plagued by voices in his head. It's the voice of Death, telling him he's going to die. Ahem. Next scene has Jindal giving Death the skinny on what life is all about. Death doesn't take to it very kindly and pays Jindal a visit the next day in the form of Ricky. It's evident that Death is in cahoots with coincidence and they have it in for situational romance. Death (now Rohan) wants a taste of human life, while Jindal gets to live for another four days and take care of pending business.

Ricky/Rohan/Death-with-a-conscience goes about helping Jindal with his business ventures; which, in turn, sees Jindal taking more of an apprehensive liking to him. A few more twists and turns see us approaching the end, where Rohan takes Jindal away to die behind some trees.

A copy-paste job from 1998's Meet Joe Black, which had some very beautiful people doing some real tight acting, Shukriya really doesn't do much for you. Aftab trying to emulate Brad Pitt (Death in Meet Joe Black) is really sad and pathetically funny at times. Anupam Kher, for one, is dignified and handles the role of a father, caught between his family and the empire he built, with great character. Shriya is just very nice to look at. Songs seem nice enough, mixed with the standard locales. The rest of the characters are just misplaced graffiti on the wall.

ADVERTISEMENT
This page was tagged for
Shukriya hindi movie
Shukriya reviews
release date
Aftab Shivdasani, Shriya Saran
theatres list
Follow @fullhyderabad
Follow fullhyd.com on
About Hyderabad
The Hyderabad Community
Improve fullhyd.com
More
Our Other Local Guides
Our other sites
© Copyright 1999-2009 LRR Technologies (Hyderabad), Pvt Ltd. All rights reserved. fullhyd, fullhyderabad, Welcome To The Neighbourhood are trademarks of LRR Technologies (Hyderabad) Pvt Ltd. The textual, graphic, audio and audiovisual material in this site is protected by copyright law. You may not copy, distribute, or use this material except as necessary for your personal, non-commercial use. Any trademarks are the properties of their respective owners. More on Hyderabad, India. Jobs in Hyderabad.