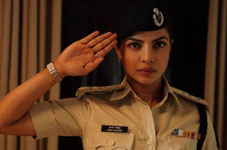 The local MP, Babloo Pandey (Manav Kaul), and his brother Dabloo Pandey (Ninad Kamath) terrorize the locals into mute submission, and are in the process of ruthless land-grabbing for the purpose of setting up a thermal power project. They function with impunity thanks to influential politicians and a corrupt police force. The poster boy for this police corruption is B N Singh (Prakash Jha), who smirks his way through a daily routine of unblinking moral compromises. The film traces Abha Mathur's crusade against this formidable juggernaut, and her impact on all key players.

Prakash Jha wasn't in the mood to experiment with the formula of 2003's Gangaajal. All his "preferred" trademarks came together successfully in the prequel, and he tries to recreate the magic here. Does it work? Let's find out.

Expectedly, the setting and the situations in this film are gritty, far removed from the insular world of luxury cruise-liners and desi superheroes. Can Chopra, currently swilling her words around in a faux American accent, fit in? Surprise, surprise - she can. Yes, the makeup is too good (you're in Bankipur, girl), the pants couldn't be any tighter, and the expensive watches (a Hublot, maybe?) are out of place. Still, in a film that doesn't shy away from frequent crowd-pleasing histrionics, Chopra delivers a restrained and sincere performance.

She's convincing in the action scenes, and you'll enjoy Abha Mathur - but you won't remember her. Why? Too much moralizing, too many platitudes, and not nearly enough of the canny shrewdness that would be necessary for survival in her world. If anything, fault the writing for creating a character whose sanitized idealism devours any possibility of emotional complexity.

You see, Jha saved all the good stuff for his own character, B N Singh. His is by far the most interesting role in the film despite the rushed trajectory of his ethical rebirth. It's hard to believe that an inveterate criminal like him could change due to Mathur's heroism, but Jha manages to holds your attention in his debut acting role. He is sinister in the first half, slipping on his character's snake-like persona, and accentuating it with a veneer of courtesy and unflappable calm. And post the rediscovery of his conscience, he is the quintessential anti-hero, ready to indulge in public lynchings if necessary.

Jai GangaaJal indeed has a lovely assortment of villains. There's your anti-hero B N Singh; the central villain Babloo, whose smooth, cunning and vindictive nature is impressively essayed by Kaul; the violent and power-mad Dabloo; and the eunuch henchman Munna Mardaani (Murali Sharma).

The action choreography doesn't do justice to all this badness, though, and lacks the gratuitous, raw energy that would be appropriate here. There's a whole lot of slapping, and yes, that seems to be the average policeman's preferred mode of expression with petty criminals - but what about the likes of Babloo and Dabloo? (Please don't snicker.)

Still, the stinging smack of an open-handed slap is oddly satisfying, and the film indulges in pretty blatant adrenalin manipulation. The songs by Salim-Suleiman serve as background score and amp up the mood in many places, corny dialogues about the "khaki wardi" abound, and most confrontations between the good guys and the bad guys happen in public, and are followed by applause.

Still, nothing can distract from the fact that the plotline is unoriginal and uninspiring, and that the film has been stretched too much. Important issues are introduced - land grabbing, corruption, farmer suicides, kidnapping, rape - but the treatment is perfunctory, and rather than evoke thought-provoking debate on these very real ills plaguing our country, Jai GangaaJal's abrupt ending highlights the film's refusal to present any real ideas or solutions.

Due to the textbook idealism of the protagonist, and the unconvincing change of heart of the anti-hero, Jai GangaaJal cannot lay claim to presenting an accurate and truly realistic commentary on society. Due to its neatly bow-tied and rushed denouements of the major questions it raises, it cannot lay claim to presenting ideas worthy of discussion, either. So what's the point? If the film was made simply to entertain, then Prakash Jha needed to lessen the histrionics, the duration and his own role.

If you must, watch it for the performances of the ensemble, but if you're in the mood for a truly satisfying Jha film, watch Gangaajal on DVD instead.
Share. Save. Connect.
Tweet
JAI GANGAAJAL SNAPSHOT 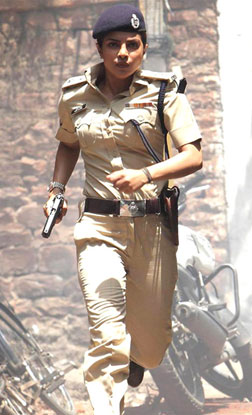 You should understand that the overall ratings are not part of a mathematical equation. It is not the sum of of the elements rated. There are quiet a lot of elements which they did not rate.
Sridhar on 10th Mar 2016, 12:23am | Permalink
You rating is technically silly. How can each element of the film be above 5 and overall rating 4? Does it mean one of the elements carries a negative weight?
Josh on 10th Mar 2016, 8:46pm | Permalink
Adding to Madhu's response, the concise answer I have is - The whole is not necessarily the sum of the parts. Sometimes it's more and sometimes it's less. The rating of the film is not some sort of a weighted average of ratings of the parameters. It just talks about the film overall.

We could explore a little further though - usually, with all these parameters, the common linking factor is the very intangible effort called direction. You can have great work from the technicians, the writers, and the artists but it is the direction that finally makes the whole film. And it isn't an easy thing to rate direction. It's just too slippery an entity to discern adequately.

ADVERTISEMENT
This page was tagged for
Jai Gangaajal hindi movie
Jai Gangaajal reviews
release date
Priyanka Chopra, Prakash Jha
theatres list
Follow @fullhyderabad
Follow fullhyd.com on
About Hyderabad
The Hyderabad Community
Improve fullhyd.com
More
Our Other Local Guides
Our other sites
© Copyright 1999-2009 LRR Technologies (Hyderabad), Pvt Ltd. All rights reserved. fullhyd, fullhyderabad, Welcome To The Neighbourhood are trademarks of LRR Technologies (Hyderabad) Pvt Ltd. The textual, graphic, audio and audiovisual material in this site is protected by copyright law. You may not copy, distribute, or use this material except as necessary for your personal, non-commercial use. Any trademarks are the properties of their respective owners. More on Hyderabad, India. Jobs in Hyderabad.